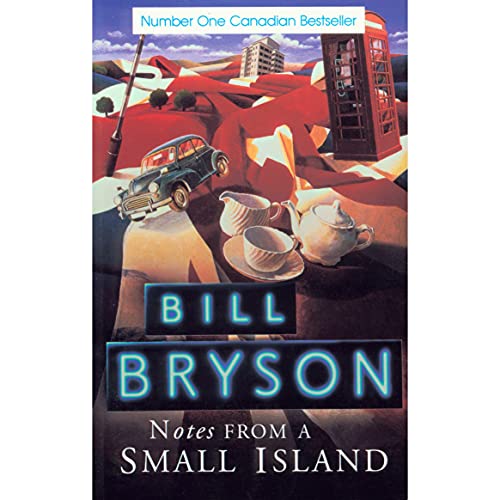 Bill Bryson is an unabashed Anglophile who, through a mistake of history, happened to be born and bred in Iowa. Righting that error, he spent 20 years in England before deciding to repatriate. This was partly to let his wife and children experience life in Bryson's homeland - and partly because he had read that 3.7 million Americans believed that they had been abducted by aliens at one time or another. It was thus clear to him that his people needed him. But before leaving his much-loved home in North Yorkshire, Bryson insisted on taking one last trip around Britain. His aim was to take stock of modern-day Britain, and to analyze what he loved so much about a country that produced Marmite, zebra crossings, and place names like Farleigh Wallop, Titsey, and Shellow Bowells.

Notes from a Small Islandに寄せられたリスナーの声

My path and Mr. Bryson's were reversed - I grew up in Yorkshire and have spent the last twenty years living in the US. This may not be the best guide book to the UK, but as a love letter to a wonderfully imperfect but perfectly wonderful place, I thought he nailed it. I got "the look" from my wife several times because I was laughing too loudly. I enjoyed this more than "A Walk In The Woods" and "I'm a Stranger Here Myself".

I enjoyed this episode in Bill Bryson's life. It was obvious that his adopted country was a place he loved dearly, and who could blame him after living the the "Dales" for so long; it's a wonderful place. But home always calls you, even after 20 years. His style of humor is always funny. I dont always agree with his opinions, but his writing is always amusing. I particularly enjoyed his chosen method of transportation and his appropriate lack of planning. It had me chuckling for hours.

Love Bill Bryson, only knocking off a star because I didn't realize this was the abridged version of the book until I started listening

I loved this book and listened to it twice! Bill Bryson's humor is rather dry, but so great. What fun.

Bill Bryson is such an entertaining writer I don't know why I waited so long to read this book. My husband listened to it with me, and we had such a fit of giggles at one point that I immediately bought Neither Here Nor There, which we listened to with equal pleasure straight after this book. Even if you don't intend to travel to England anytime soon, viewing the country from his American perspective is a blast.

Big Story about a SmallI Island

Bloody brilliant. It felt like being back in England accompanied by one who has lived there with eyes wide open!

Bill Bryson takes us on a fascinating tour of Britain, Scotland and Wales. I love his witty sense of humor and the level of details with which he describes the cities and towns, landscapes, and people, all with interesting facts about history and culture. I feel like I spent a few weeks In England. Thank you for such a comprehensive description. I have a deeper understanding and appreciation of UK after listening to this audiobook and would like to experience some of described treasures in person.

I love Bill Bryson, such a wonderful writer. Read all his books, they are so informative about the world and make you smile!

Relax to enjoy a slow journey

The first time I listened, I stopped for awhile because the pace was slow and I got impatient. When I returned to it, I relaxed and enjoyed the experience.