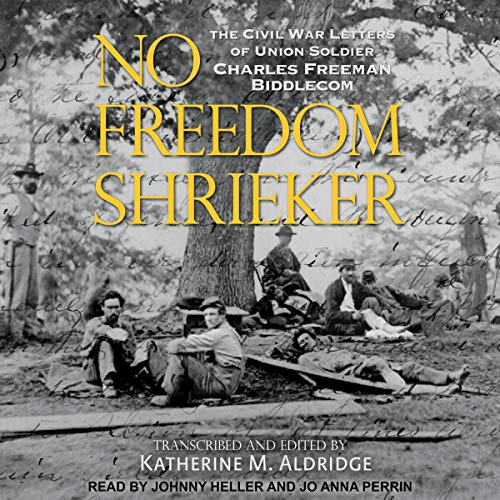 Among the piles of obsolete farm and household implements, haystacks, dust, and debris abandoned in her historic barn, Katie Aldridge discovered a box containing the Civil War letters of Charles Freeman Biddlecom. Painstakingly transcribing and lightly editing more than 100 letters written by the soldier to his wife during his service, Ms. Aldridge resurrected the voice of the Civil War combat soldier.

The tone and character of "Charlie's" detailed accounts of the war compelled Ms. Aldridge to find out more.

From letters written throughout Grant's Overland Campaign the listener gains an insider's view of the war: fear, hunger, sickness, longing, and concern for those left behind as well as detailed insights about the political climate. Writing from the perspective shaped in an Upstate New York community closely linked to the abolitionist cause, woman's suffrage, and the Quaker philosophy, the listener will learn how Charlie's background shaped his actions and view of the war.

I very much enjoyed listening to Charlie's letters home. I had three great-grandfathers that were all in the 188th NY Infantry so he was at many of the same places and shared many of the same experiences, I am sure. None of us can really imagine what those men went through.