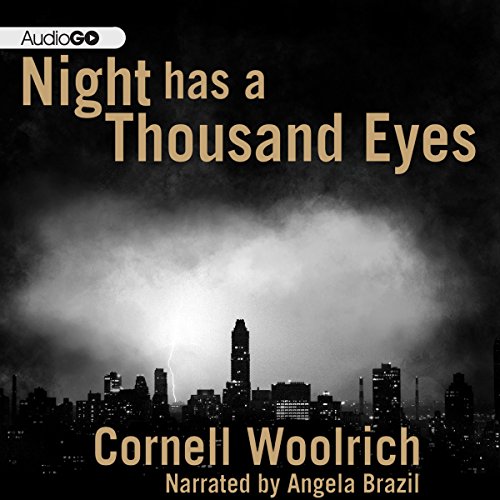 In Woolrich's iconic tale, Detective Tom Shawn saves a lovely young woman from a suicide attempt one night, and later hears her story. She is in despair because the death of her wealthy father has been predicted by a confidence man seemingly gifted with the power of clairvoyance; a man whose predictions have unerringly aided her father in his business many times before. Shawn and a squad of detectives investigate this dire prediction and try to avert the millionaire businessman from meeting his ordained end at the stroke of midnight. One of Cornell Woolrich's most influential novels, this classic noir tale of a man struggling with his ability to see the future is arguably the author's best in its depiction of a doomed vision of predestination.

Night Has a Thousand Eyesに寄せられたリスナーの声

I had often heard Cornell Woolrich grouped with writers of the hard-boiled school like Chester Himes and David Goodis, less famous perhaps than the Hammetts and Chandlers, but deserving of more exposure. Based on the evidence of "The Night Has A Thousand Eyes" he is not in their class. This is the first Woolrich I have exposed myself to, but I think it will probably be my last.

This is not a well-written novel.

Woolrich produced a copious amount of work in his lifetime and a very large number of his stories were adapted into well-regarded movies, often in the noir vein. I'm guessing (again going on just this novel, which, who knows, may not be as representative as I'm assuming) that the film adaptations did not strive to be terribly faithful. In this book I found his plotting inconsistent, his characters wooden, his dialogue artificial (and all of a single flowery tone, whether spoken by characters high-born or low), and his pacing leaden.

There is a germ of a good idea in the plot -- and perhaps that is what attracted film makers to his works, their plots rather than anything in their presentation. But the plot of this one is barely enough to sustain a short story. This audio book is almost 12 hours long.

In this book, Woolrich makes sure that anything he has to say or describe he says over and over again in as many ways as possible. If a character has a sarcastic retort to someone, Woolrich makes sure to report the retort, then point out that it was meant sarcastically, then underline that the sarcasm was meant disparagingly. The simplest scenes are drawn out, so they seem to go on forever. And not in a way that adds to the mood or reveals interesting things about the characters, as some ornately narrated works do. Instead they emphasize the obvious and point out the banal.

The first half of the book is the biggest slog. The second half picks up a bit, if you can get that far, but not much. It all leads nowhere very interesting. If this had been a short story, a brisk pace and a rapid presentation of what plot points there were might have mitigated against this, but short it definitely is not.

The most interesting section of the book to me was a brief side plot involving a traveling circus and an escaped lion. That section worked despite Woolrich's flaws as a writer, and of course is was comparatively short and sweet.

The narrator I suppose does her best with Woolrich's purple prose. But her flat affect doesn't do the work any favors. Her cop characters come across as more whiney than tough, although that is partly Woolrich's fault. One of the characters starts out half-crazed and suicidal, but you never get a sense of suppressed hysteria from the narrator. (Par for the course, half-way through the book this character changes on a dime and suddenly stops being suicidal and frantic and her original state is never mentioned again.)

The narrator does not elevate the poor source material in any way, but, again, perhaps that was just not possible.In summary, tedious, overwritten, underplotted, drab characters, unengaging narration.

I would recommend looking elsewhere for something in the hard-boiled or thriller line. Unless this was a completely atypical effort from Woolrich, probably best to consider another author altogether.

As a Woolrich fan, I’ll star this review by admitting that his tremendous talent for short stories sadly does not transfer over to novels all that well. The concept of the plot is very interesting, but he doesn’t seem to know how to adapt pace for a full length book. Though I think a lot of those issues would have been less noticeable under a more charismatic
narrator.

But aside the above, as a fan of the genre I did enjoy the story and don’t regret getting it in the slightest, especially in the second half of the story. The roulette scene especially was a real stand out