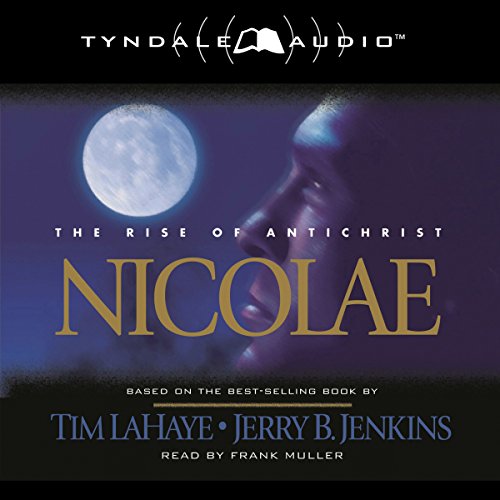 Only one series will take you to the end of the world as you explore eternal truth: the best-selling Left Behind series by Tim LaHaye and Jerry B. Jenkins. Now the entire series is available in an audiobook format. Each abridged audio is read by Frank Muller.

It has been nearly two years since the day of the mass disappearances. In one cataclysmic instant, millions all over the globe simply vanished, leaving everything but flesh and bone behind. Nicolae begins as global war has erupted. The Red Horse of the Apocalypse is on the rampage, and the Tribulation Force sets a suicidal course that places them in direct opposition to the rise of Antichrist.

Nicolae: The Rise of Antichristに寄せられたリスナーの声

Why is the fact that this is abridged not clearly marked in the title and summary? So frustrating to find out after the book is complete.

I really have enjoyed book three. makes you open your eyes to the prophecy of Revelation. Even though the characters are fictitious, The reference towards the Bible and the scriptures are true and very scary.

Amazing book, love the story. It’s my favorite book series. The only thing is, the name Tsion, is pronounced as “Zion” as it explains in the book before yet the narrator pronounced wrong he said “Tee-zin” the rest of the narration was great, the name was the only thing that bothered me.

the book was good, just left out a lot of important details. I didnt realize this was the short version

I Don’t Understand Why It’s Abridged

I will leave my full review on the unabridged version.
Once again a great story... until I realized it was only 30% of the book. It’s not really a big deal since I used a credit on it, I just want to make sure everyone knows before getting this book.
On the note of the narration, I really enjoyed the emotion and immersive ness Muller brought to the table. However he did read quite fast at times, leading me to slow down the narration speed to around 0.9 or so. Also in book 1, the authors mention that Nicolae had a very faint Romanian accent, but Muller voiced him much thicker than that, the way his voice was almost made me picture him differently than I did in the first two books.

I really enjoyed this book.

The only real issue is that it seemed like Nicolae's voice changed. Good book though.

The real book is 10+ hours long what the hell is this. Pissed off! Great series tho

No where did it say this was an abridged version. Good parts were left out and replaced with horrible music that went on and on. I am not happy with this version.

This is a great book! Thanks for the enjoyment. God Bless all. Listen to this book.

vast swathes of the story were skipped. you can hear the next loop. just lousy