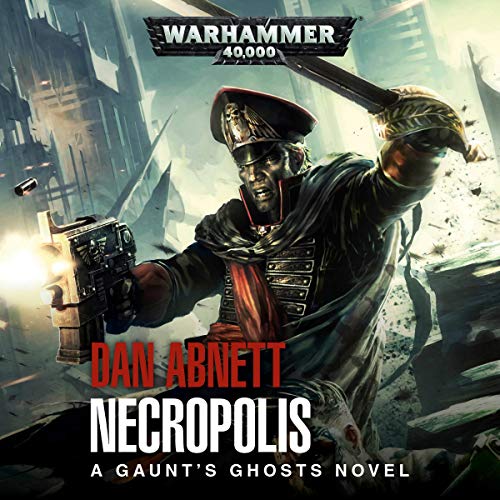 Book 3 in the Gaunt's Ghosts series.

On the shattered world of Verghast, Gaunt and his Ghosts find themselves embroiled within an ancient and deadly civil war as a mighty hive-city is besieged by an unrelenting foe.

Listen to it because: The return of a classic Gaunt's Ghosts novel! The Tanith First deploy to Verghast to help break the Chaos siege of Vervunhive. Tanks clash with daemon engines, Imperial Guardsmen make brave last stands and Colonel-Commissar Gaunt steps up and takes control of the war effort, showing for the first time the command abilities that will go on to make him a legend.

The story: On the world of Verghast, a grinding war between two hive cities - one loyal to the Imperium, the other fallen to the worship of the Dark Gods - is bolstered by the forces of the Astra Militarum, spearheaded by the Colonel-Commissar Gaunt and the Tanith First and Only. But bitter rivalries and treachery threaten to derail the defence of Vervunhive, and it falls to Gaunt to take command of the Imperial forces and forge victory from an almost certain defeat.

Dan Abnett's Gaunt's Ghosts series is such a joy both to binge read and listen. Here's hoping they would release the other books soon.

You line them up and I’ll buy them up!

There is no better series to start with for Warhammer 40k than the Gaunt series. Necropolis is a wonderful addition to it. I can’t wait for book 4!

This is some of the best Warhammer fiction I've ever read. As usual, the team of Abnett and Longworth cannot be beat.

If you've been looking for a story about the down and dirty work the Guard gets up to, there's none better!

Wow! Give these audiobooks a shot! The narrator does a great job and I’ve never wanted to start an imperial guard army in 40K more so than after these books!

Dark, opressive, a blast to listen to.

Really gives you a feel for what war in the 40k universe is truly like. Gaunt is quickly becoming a personal favorite of mine, and stories like this just solidify that opinion

still as good as the first time.

only issue I have with these, are the lack of narrating the epilogue. other than that tiny Tiff. I love em

thoroughly enjoyed this one

out of the ghost book so far this is the one I feel is most put together and thrilling.

The best ghosts novel in the whole series. Highly recommend! Very in depth. Breathes life into the warhammer 40k world.

I could not have asked for a better reader then Toby Longworth. My favorite Warhammer series to read/listen to and its being done amazingly. Keep up the amazing work!

It's Dan Abnett read by Toby Longworth.That is all

It's Dan Abnett read by Toby Longworth. That is all...

Last Millennium I wandered into my local Games Workshop store and perused the book shelves.

I wasn't interested in playing the games but liked the lore, and while looking at the selection of books, saw a recent release - 'Gaunt's Ghosts.'

I bought this paperback book (they were only available in paperback in a pulp fiction kinda vibe back then), and have bought each of Dan's books since.

'Necropolis' is typical of Dan's style - tight action scenes and bad characters which get taken down a peg. Or more...

It's been an interesting ride with Dan with the settings getting larger, the characters more nuanced, the plots more intricate.

Toby, to my ears, is a near perfect narrator for 40K.

So, the combination of the pair of them is a must buy. Every time.

One of the very best pieces of 40k fiction

One of the best pieces of 40k fiction, showing a realistic sense of the chaos of war, with a wonderfully evocative reading performance.

Blown out of the water

Wow, can't wait for the next
I can not wait to see where they go next and for all the little things like reunions to be resolved

Just a bloody fantastic book.. Get all the Ghost books and sit back to hours of the best listening on the platform, but we do need the rest of the series.

loved reading the book and loved listen to it. As always Toby give you a great view into the 40k universe.

Must have. Great book and a great story.

Great story and not a boring/slow moment. Loads of epic moments and loads of twists in the story

Fantastic continuation on the story

Been waiting on needles for this book to be voiced, and it's finally here and doesn't disappoint at all.
Toby Longworth yet again does an absolutely stellar job on the narration and brings every character to life.
The writing by Abnett is also great, and he's doing what he does best.
Absolutely loved it, start to finish and can't wait for the 4th installment.

Perfect, absolutely perfect. I started reading these when they first came out and now I can catch up where I left off with audio while I work.
Please release the next one soon.

voice acting is the best. capture how i thought Gaunt would sound in my head. Dan as always knocks it out the park with his writing.

if you have not read Gaunts ghosts yet go buy the first one now! you won't be disappointed.

One of the Black Library's best

Abnett has been a fantastic portal into the grim darkness of the 41st Millennium. Gaunt remains a fantastic character and his ghosts are some of the most realised of the Imperial Guard. The hive politics and intrigue are of particular note. The Efforts of the Gaurd are wonderful realised though this nail biting action thriller. 5*

The gaunts ghosts series is without a doubt one of the best warhammer series ever, and necropolis is no exception.

another great story by Dan Abnett. Toby longworth is a great voice actor for the 40k setting.

hope the next one is along sooner than later

was well written, like all Abnett, but it still irks.me they released number 13 and 14 before going in the order in order publication..bloody stupid.

Longworth does such a good job narrating, the fact that its Gaunts Ghost is perfect. Really hoping they do the other GG books

what the title says, but stretched out enough to constitute being a full review. pudding

another amazing book by Dan. I did find a bit much with the battle scenes but the the book definitely fits the story of redemption for a regiment of ghosts.