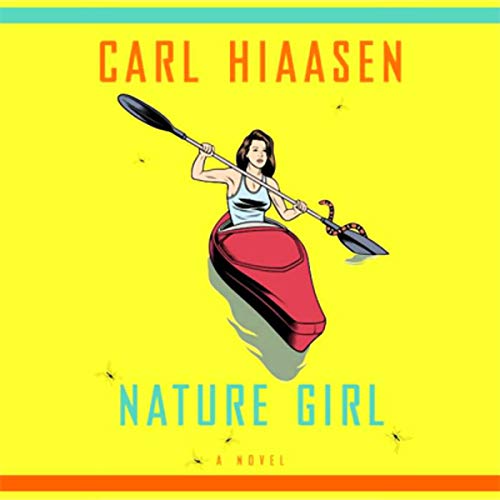 "Old fans and newcomers alike should delight in Hiaasen's 11th novel, another hilarious Florida romp [with an] engaging and diverse screwball cast...Hiaasen's humorous touches and his all-too-human characters carry the book to its satisfying close." (Publishers Weekly)

What she doesn't know is that she's being followed by her Honey-obsessed former employer, Piejack. And he doesn't know he's being followed by Honey's still-smitten, former-drug-running ex-husband, Perry, and their wise-and-protective-way-beyond-his-years 12-year-old son, Fry. And when they all pull up on Dismal Key, they don't know they're intruding on Sammy Tigertail, a half white-half Seminole failed alligator wrestler, trying like hell to be a hermit despite the Florida State coed who's dying to be his hostage.

Well worth the wait!

I too am surprised by the negative comments. I laughed out loud as I have while listening to many of Hiaasen's previous books. The characters were creative, and the plot was typically convoluted. The voices created by the narrator were key to my enjoyment of the book. If you like Hiaasen, give this one a try, and make your own decision! I did not want to turn it off.

I'm baffled by the negative reviews. This is classic 4 to 5 stars Hiaasen read by an excellent narrator. I couldn't get off the treadmill because I didn't want to turn off my ipod. Perhaps it's not his best, but even on a bad day, Hiaasen is in his own category. I predict you'll like it.

I am disappointed with all of the negative reviews. This is one of his first that did not make fun of Florida Tourism. I think that Hiaasen is a fabulous writer that uses Satire to show us where we fail. This book may not have been on a par with Skinny Dip (His best book), but it was up there very close. If you have ever dealt with telephone call centers or telephone solicitors or telephone scams, this is a MUST READ.

I am a fan of Mr. Hiaasen and have enjoyed reading all his books. The problem here is the narrator. She has a stunningly beautiful voice, perfect diction, a slow pace, no sense of humor,and very little talent in character deliniation (Valley girls, gold-rush prospectors, and subtle cartoon voices). She sucked all the fun out of this one. Sorry I didn't buy the book.

I'm a giant fan of Carl Hiasson, have enjoyed all his prior books, and looked forward to this one.

I'm sad to say: This book was quite a disappointment. The humour and satire seemed forced; the characters were, in my view, boring. Seems to me like Hiasson is in a rut, and that this one was just churned out.

I couldn't wait to finish the book and had to force myself to do so.

I hope this is just a slight rut in Carl Hiaason's otherwise brilliant career. In all, I cannot recommend this book to anyone.

I was very disappointed in this book. After listening to so many other great books by this author, I wondered if his publisher suggested that some extra steamy passages were needed to keep the novels selling? After several hours, I just lost interest in what seemed to be a plotless book.

I enjoy Carl Hiassen's odd characters and the entertaining way that he alerts readers to the the abuses by money grubbers of nature, but this time, I found it all very predictable (this is my 3rd Hiassen novel). It is clever, well narrated, and gives some food for thought among the absurdity of it all. Good, but not the best.

I have read (or listened to) all of Hiaasen's books. While I don't think it is as bad as some of the other reviewer's suggest, it is clearly one of his lesser efforts. The plot is thin and drags at times. The ending is predictable. Some of the humor is forced. Unlike some other reviewer's, I did like the narrator. I think she did the best she could with the mediocre material. I hope this is a temporary detour for Hiaasen, rather than a sign of things to come.

What makes Hiaasen such a wonderful writer? Absurdity, main characters that are flawed but decent, incongruous minor characters, and entertaining plots are the reason I read him. The problem is that after fifteen years of what started as new bizarre type of writing now sounds almost normal. Hiaasen’s obsession with replacing hands with other objects continues here; but alas, it is weak and never really helps the story. Hiaasen is actually too sane to portray Honey as crazy. Honey acts and reacts rationally through out the book. The plot is very weak with too many characters, none of which are very powerfully drawn.

The book does has its good moments, the fire ants paragraph and the obsessed Lilly. Nonetheless, Hiaasen has fallen victim to his own success. Buy it, and enjoy a few hours of fun; it is well worth some smiles, but contains none of the outright belly laughs of his earlier books. Also remember that Hiaasen at 3 is better than most writers at 5.

There is the not-quite-right-in-the-head protagonist and the offbeat people who love her. The even stranger antagonists, a couple of innocents wondering around to round out the story; each and every one of them carrying an offbeat, if descriptive, name. Still the author is entertaining, and the humor flows freely and naturally from the characters. Added to the main characters are bit players like an FSU coed named Gillian and a young mixed blood Seminole once known by the name of Chad McQueen now going by Sammy Tiger Tail and the phone solicitor Eugenie Fonda. As usual many bizarre not to mention highly improbable events transpire and credulity is broken over and over in the name of entertainment. If that sounds like entertainment to you you'll enjoy this one.