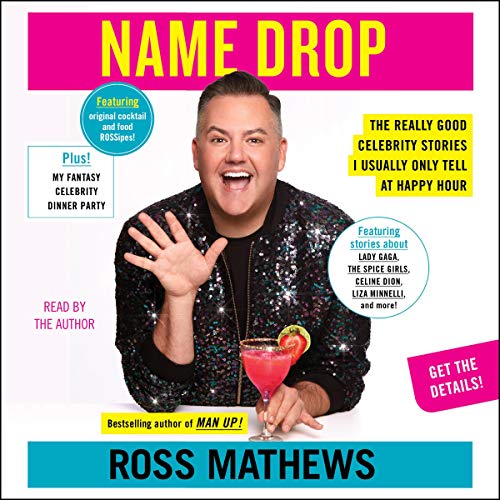 From Ross Mathews, the nationally best-selling author of Man Up!, judge on RuPaul’s Drag Race, and alum of Chelsea Lately, a collection of hilarious and irreverent essays about his experience with Hollywood’s most talked-about celebrities.

Pretend it’s happy hour and you and I are sitting at the bar. I look amazing and, I agree with you, much thinner in person. You look good, too. Maybe it’s the candlelight, maybe it’s the booze. Either way, let’s just go with it. Keep this all between you and me, and do me a favor? Don’t judge me if I name drop just a little.

Television personality Ross Mathews likes telling stories. He was always outrageous and hilariously honest, even when the biggest celebrity he knew was his favorite lunch lady in the school cafeteria. Now that he has Hollywood experience - from interning behind the scenes at The Tonight Show with Jay Leno to judging RuPaul’s Drag Race - he has a lot to talk about.

In Name Drop, Ross dishes about being an unlikely insider in the alternate reality that is showbiz, like that time he was invited by Barbara Walters to host The View - only to learn his hero did not suffer fools; his Christmas with the Kardashians, which should be its own holiday special; and his news-making talk with Omarosa on Celebrity Big Brother, which, as it turns out, was just the tip of the iceberg. Holding nothing back, Ross shares the most treasured and surprising moments in his celebrity-filled career, and proves that while exposure may have made him a little bit famous, he is still as much a fanboy as ever.

Filled with tales ranging from the horrifying to the hilarious - and with just the right “Rossipes” and cocktails to go along with them - Name Drop is every pop culture lover’s dream come true.

So funny! great performance on the reading!

Ross is non-stop hilarious! This book is so funny and the way ross reads the audible version is so entertaining. You will truly feel like you are at happy hour with a great friend who has lots of tea to sip, and that tea is good! Be prepared to laugh!

Stayed up to listen

After man up I was dying to
Listen to this, stayed up for release and it’s fabulous so far! Can’t wait to get my signed copy during the tour!

The best of the best. Kish kish

This was so good. I listened to It while reading along in my signed copy (shout out to Target). With Ross reading it it was like he was in the room with me just telling his juiciest celebrity stories. I love it so much. And for those who know: Butch Ricky!!! And Kish kish 💋💋

You will not be disappointed! A delight from start to finish. I love you Ross and thank you for commitment to entertain and love what you do. Kish kish

Feel good book for the gays!

I loved every minute of this book. If you love Ross or are a fan of Straight Talk, you will love it too. I don’t know what it is about him but he is a cure all for my anxiety and depression. For a while at least.

I live Ross but this felt forced. The stories weren’t that juicy and the recipes were annoying.

Ross is an absolute delight. Listening to this book was so fun and a much-needed distraction while going about my day in quarantine. His stories were so fun!

This would totally be me around my idols. Perfect little bon-bon of a listen when you don't wanted anything heavy.

I absolutely love Ross Mathews! I felt like I was with a good friend just gabbing and telling fun famous people encounters.
I just love the recipes for each chapter and how it relates to the story he’s about to tell.
With so much going on in this world this book is a treat and delight to indulge in.

Ross is fun and entertaining telling celebrity stories that leave you wanting to hear more! I look forward to another book from this stupendous author.

This was soo funny!!

Thankyou Ross for the stories!! This was so fun, and the PDF with the Roscepies is FANTASTIC!! Heard all of it in a day, felt like I was at a sleep over party with my girlfriends just catching up with somee Juicy Stories!!

A subtle lesson in the value and strength of doing you, and loving others for being them.

I do love Ross but some of the stories repeated from the first book and I would’ve liked more stories on celebrities not imaginary Fantasy ones. But I still enjoyed it

... I know this cause he tells me so. And because I am, he shares with me a wonderful collection of stories and anecdotes from his life. This is not salacious, just good, old fashion, fun stories of (mostly) famous people as told by Ross, in the unmistakeable Ross way. To complement our journey, Ross gives us a matching cocktail and food Rossipe (Recipe) to make/eat while listening. His style is infectious and just puts a smile on your face, all the while giving you an insight into the world of celebrity, but more importantly, into the world of Ross. Thoroughly enjoyable and worth every penny. All the chapters are bite-sized and easy to stop and start should this be your grind.