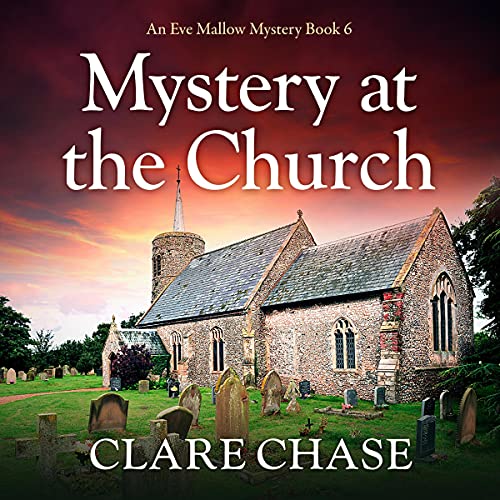 Mystery at the Church

When a TV drama crew descends on sleepy Saxford St. Peter, Eve Mallow joins the excited throng of extras in a funeral scene. But then a real body is found...and Eve gets a starring role as sleuth!

Eve Mallow is looking forward to her 15 minutes of fame when Saxford St. Peter is chosen as the location for a new drama series. A devoted people-watcher, Eve is thrilled to learn that TV stars are just as glamorous - and tempestuous - as she’s always imagined.

But then someone delivers a bouquet of poisonous flowers to the director Rufus Beaumont, making Eve worry that some of the rivalries she’s noticed are deadly serious. And when Rufus’ body is found in the church where the funeral scene took place, it’s clear that someone’s out for the kill in real life.

Eve and dachshund Gus have been on the ground from the start, and now they’re on the case, interrogating the suspects one by one. Is it the devastating diva whose relationship with Rufus was far from professional? The cameraman who caught Rufus doing something he shouldn’t? Or the groupie groundskeeper who’s in the background of every shot? One thing’s for sure - Eve must catch the killer before she stars in their next murderous production....

Good if you like stories with little depth, and are willing to accept juvenile explanations and details. For me it was a relaxing change, but doubt I will buy more if this is the author’s overall style.

Keeps you guessing until (almost) the very end.

During lockdown Audible has been excellent and I have found some amazing book series. Clare Case has written some wonderful stories I really like the characters I would like to see a book with She's twins helping her with a murder while visiting. Maybe during Christmas, the other thing that I would also like to see is a different style of ending that doesn't fall into the theme of the previous books. I look forward to hearing more books by Clare.

Another great instalment in the Eve Mallow series. When a film company come to Saxford St Peter to record a new drama series the residents are excited to be invited on set as extras for a funeral scene. But there is soon a real life murder on set and Eve finds herself interviewing the key players for his obituary whilst also investigating his murder. A great cosy mystery.

Mystery at the Church

It took me a while to get the volume and speed right so that I could catch the awful American accent. I had to re listen several times.
I’m not sure I will listen to another by this author but perhaps if there is a different narrator ??