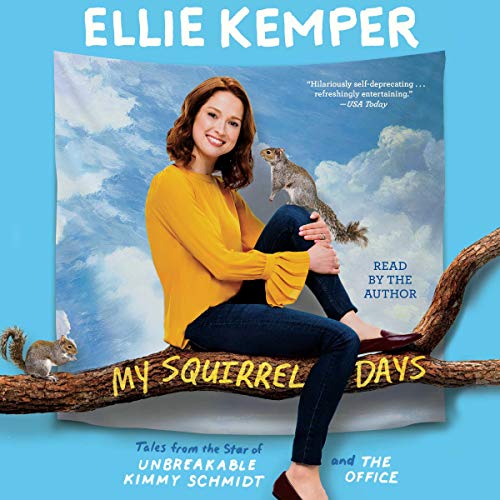 "If you're at all a Kemper fan already (I am, a lot), you will freaking love this audiobook. Her performance is infectious. Her energy is like a rocket ship blasting out of my ear buds and into my soul! Every time I would tune back in, I was re-energized by her joie de vivre. This woman loves life, loves her life, seems to love the life of those around her; hell, she probably even loves the life of the manager of the brunch spot that didn't quite get the lentil-to-kale ratio correct on her salad. Ellie Kemper is a happy person. But she's still a regular person too.... Though I've never met her, after listening to My Squirrel Days, I feel confident in saying that Ellie Kemper is my best friend!" (The New York Times Book Review)

Comedian and star of The Office and Unbreakable Kimmy Schmidt Ellie Kemper delivers a hilarious and uplifting collection of essays about one pale woman’s journey from Midwestern naïf to Hollywood semi-celebrity to outrageously reasonable New Yorker.

There comes a time in every sitcom actress’ life when she is faced with the prospect of writing a book. When Ellie Kemper’s number was up, she was ready. Contagiously cheerful, predictably wholesome, and mostly inspiring except for one essay about her husband’s feet, My Squirrel Days is a funny, freewheeling tour of Ellie’s life - from growing up in suburban St. Louis with a vivid imagination and a crush on David Letterman to moving to Los Angeles and accidentally falling on Doris Kearns Goodwin.

But those are not the only famous names dropped in this synopsis. Ellie will also share stories of inadvertently insulting Ricky Gervais at the Emmy Awards, telling Tina Fey that she has “great hair - really strong and thick”, and offering a maxi pad to Steve Carell. She will take you back to her childhood as a nature lover determined to commune with squirrels, to her college career as a benchwarming field hockey player with no assigned position, and to her young professional days writing radio commercials for McDonald’s but never getting paid. Ellie will guide you along her journey through adulthood, from unorganized bride to impatient wife to anxious mother who - as recently observed by a sassy hairstylist - “dresses like a mom”. Well, sassy hairstylist, Ellie Kemper is a mom. And she has been dressing like it since she was four.

I was looking forward to this audio book for months. I’m a huge fan of Kemper from the Office and especially Kimmy Schmidt. With that said, I found the book to be pretty boring. I guess I’m looking for something more genuine. While I’m sure it was - I just felt like she was holding back. Stories she told from her youth were the vast majority of the book and uninteresting to me. With that said I’m still a fan of the actress - I just didn’t like the book very much.

This book wasn’t as great as Ellie is.

I love Ellie. She told some interesting stories and I frequently laughed and enjoyed her enthusiastic personality. I just felt like she was in character the whole time and it got a little old after a few hours of listening. I wanted to hear Ellie, but I feel like I was hearing Kimmy Schmidt instead.

An unrelatable if not annoying memoir

Like many other people, I am a huge fan of the Office and particularly enjoyed Ellie's character and the dynamic she brought to the show in later seasons. So I was very disappointed as I progressed through this book to find out that with each progressive story/essay, I found myself disliking Ellie almost to the point of being annoyed. I understand there is some sensationalizing going on for dramatic or comedic effect, but I was often left feeling disdain or frustration at the overall person we are being presented with. Maybe that is the point, but all in all I was just left with disappointment over losing respect for someone I was excited to know more about, plus just pure relief that it was over with.

I love Ellie, but not this book

Pure fluff. I feel like Tina Fey’s excellent Bossypants sparked the usual herd mentality in the publishing industry: pretty comedy starlets must put out a book, and soon! What has followed have been disappointing. And they’re only getting worse. I can’t wait for this trend to end. Kemper’s book is so insubstantial that the hard copy weighs as much as the audiobook. Pure fluff here, folks.

If you love Ellie Kemper get this book!

I absolutely adored this book -- it is one of my favorite books I have ever listened to! Ellie Kemper's writing is just as hilarious and entertaining as her acting. I was having a bad day and immediately felt uplifted when I got in my car and started listening to this book. I also highly recommend listening over reading it in print -- her voice and the way that she reads are part of what make it so dang funny.
I listened to this book while driving and was laughing out loud so hard that I was actually embarrassed that people driving beside me could see me cracking up alone in my car. Ellie is hysterical and the way she tells her stories make her relatable. This book is such a treat and I cannot recommend it enough! Its the perfect dose of happy that we all need in our lives.

I feel terrible giving this anything less than a good review, because I adore Ellie and think she is so talented. However this book really disappointed me. The stories had no depth to them, and were about mostly seemingly meaningless events. Though I find Ellie very funny in real life, the book never made me laugh. I kept waiting for the stories to have more substance/humor but it never really happened. Sadly I do not recommend it.

Reasonably well written; well performed by the author (not surprisingly). Just not interesting. Nothing particularly compelling about her story, quite a charmed life.

Kemper is certainly funny, but this is not really a book I enjoyed having with me on a long drive, as I would enjoy Tina Fey’s— Sorry Ellie. It’s just too loud, with too much over the top stuff to have in a big chunk of time. I’d recommend the book for dipping into and not for a long read. She’s endearing, but I OD’ed on her.

I love Ellie Kemper and this book was everything I hoped it would and so much more!!! I was dying laughing, she is seriously quirky in the best way. I will probably listen to this book several more times just because. Also, you cannot beat her voice, it is just delightful :)

It is always great to heat the author reading their own material. Even better when it is someone as funny and entertaining as Ms. Kemper!