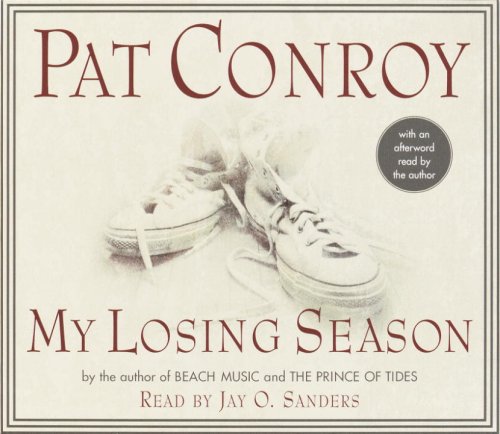 A deeply affecting coming-of-age memoir about family, love, loss, basketball - and life itself - by the beloved author of The Prince of Tides and The Great Santini

During one unforgettable season as a Citadel cadet, Pat Conroy becomes part of a basketball team that is ultimately destined to fail. And yet for a military kid who grew up on the move, the Bulldogs provide a sanctuary from the cold, abrasive father who dominates his life- and a crucible for becoming his own man.

With all the drama and incandescence of his best-selling fiction, Conroy re-creates his pivotal senior year as captain of the Citadel Bulldogs. He chronicles the highs and lows of that fateful 1966-67 season, his tough disciplinarian coach, the joys of winning, and the hard-won lessons of losing. Most of all, he recounts how a group of boys came together as a team, playing a sport that would become a metaphor for a man whose spirit could never be defeated.

Pat Conway is just the best, I enjoyed this book imensely and I don't even like basketball much.

This is the heartbreaking real-life story of Pat Conroy as a member of the basketball team at The Citadel. It's the true tale of "The Lords of Discipline," but reality is harsher than fiction. Thank God Mr. Conroy grew to loves books as he has and was given the ability to write words that make us laugh hysterically and cry uncontrollably. That's why he's my favorite.
His recounting, especially, of his meeting with basketball teammate Al Kroboth would make even the harshest critic shed a tear.

This was my first experience in Pat Conroys world and will have to say the book was so well written that I caught myself wondering why all books are not written like this. The book brought me in to the Citadel, the world of Mel Thompson, and the Great Santini. I would listen to this book again. This was my 15th or so audiobook in 6 months. I do believe that you have to like some aspect of literature and sports to truely get all there is in this book.

What does it mean to compete?

I have never been an athlete or a member of an athletic team. Pat Conroy made me understand this experience better than I ever thought possible. I learned a little of the passion and the drive that keeps a person who is not a star working and striving.

It takes an amazing writer to present a person as detestable as Pat Conroy's father and not make you hate him. Instead, you come to accept him even as Pat has come to terms with him.

It is a great thing to have this author narrate his book. It is an extremely personal narrative, and his voice carries the emotion of this narrative beautifully.

What did you love best about My Losing Season?

I loved how intimate the book felt. Just like listening to an old friend talk about his life.

What a wonderful trip. It was so much of my life that I thank Mr. Conroy for the insight into my family and that time in history.It was more then a reviews of the season it was a review of our lives. It seems as if Mr. Conroy was writing about my life. Thank you

I'm a first time reader to the Pat Conroy series and the first book , the Losing Saeson will propel me to read all of his books, It's the type of book that you hate to put down . I feel like I'm in the book and want to be a character. Great stuff and can't wait until my next book arrives.

This is not my first Conroy. Far from it. I read my first Conroy as a summer reading assignment before my 8th grade year. I made my first basket at the age of 8 when I accompanied my father to the basketball court one Saturday morning because I wanted to play on the swing set just off the court. But as we were headed home I lobbed one into the air per my usual ritual... only this time it went in. I made him take me back 3 times that day and so was basketball.

I bought this book the day it was released and realized Coroy would never write anything so dear to my heart as this tale about the south and basketball. My sport. My author. My south.

And so I purchased this audio book to listen to on the treadmill because I knew the prose and the competitive spirit of the boys from that team would push me forward when I didn't want to go. And it worked like a charm until the narration began and I realized that the narration had let down my south.

The author's home town of Beaufort South Carolina and the majestic city of New Orleans are mispronounced at every occasion. And each time it took me out of the narration.

The book is amazing... but it's a far better read than listen.

While Pat Conroy's books are always engaging and challenging for the reader, this book loses its Southern heritage being ready by Chuck Montgomery. His annoying misprounciation of Beaufort (which should sound like "beautiful", as in "Beautiful Beaufort by the Sea.") as "Bow-fort," and St. Helena as "St. Hel-een-a" served to frustrate this listener, who thinks these errors are a major problem the publisher should correct. I cannot help but wonder what else the reader has mispronounced? Save your money on this one, listeners, and read the pages, where you can hear Pat Conroy's voice in your head pronouncing the names correctly. His amazing story deserves a better performance than Montgomery delivers.

I never had a losing season because I played with the best athletes in my county. But this book ripped my heart out and made me laugh, cry, and count my blessings for the beautiful game of basketball and my wonderful teammates.