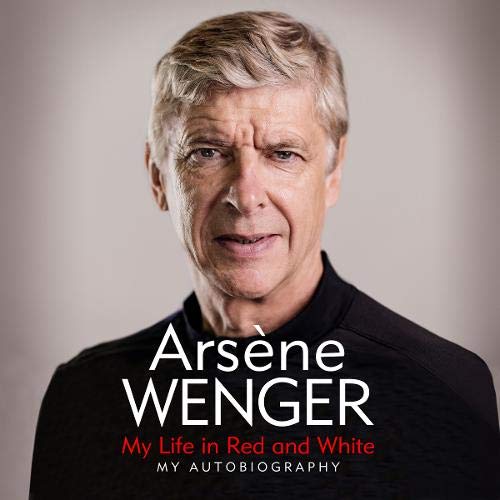 For the very first time, world-renowned and revolutionary football manager Arsène Wenger tells his own story. He opens up about his life, sharing principles for success on and off the field with lessons on leadership and vivid tales of his 22 years managing Arsenal to unprecedented success.

There, Wenger won multiple Premier League championships and a record number of FA Cups, and his teams included the Invincibles of 2003-2004 and a record-breaking undefeated 49-match run. He popularised an attacking approach and belief that the game should be entertaining, but he also changed the attitudes of British football fans towards players' diet, fitness and coaching methods - and towards foreign managers, too.

In My Life in Red and White, Wenger charts his extraordinary career, including his rise in France and Japan where he managed Nancy, Monaco and Nagoya Grampus Eight (clubs that also play in red-and-white, like Arsenal!) to his 22 years at the helm of an internationally renowned club from 1996 onwards. He describes the unrest that led to his resignation in 2018 and his current role as chief of global football development for FIFA. He offers studious reflections on the game and his groundbreaking approach to motivation, mindset, fitness and football that was often beautiful to watch.

This audiobook is a must-listen for not only Arsenal fans but football fans everywhere, for management and business leaders, and anyone seeking the tools for success in work and life. It will illuminate the mystique surrounding one of the most revered and successful manager's life story, strategy and vision in the world's most popular sport.

My Life in Red and Whiteに寄せられたリスナーの声

Great if you’re an arsenal fan. Kind of dull if you’re not. Over the years have loved listening to Wenger even though I’ve hated most of his teams! He thinks about the world in a fantastic way and always has something interesting to say. I wanted to know more about HIM and his philosophies of life, beyond just his players and football relationships. Was disappointing. Maybe he’s keeping all that for his next story.

Good book, but a bit short and lacked stories

So this is a good book, I enjoyed listening it. But what I thought could have been better is if Wenger had told more specific stories about players or even specific matches especially in his time at Arsenal. There are a few stories here and there, but not as much as I would have liked.

Boring and no structure

As an Arsenal fan I found this book frustrating to listen to, I was hoping for more... Also it's hard to listen to Arsene's voice.

Excellent. Answered many of the questions

Answered many of the questions I had on his tenure as manager and decisions made on and off the pitch.

A Must for Football fans!

A book for Arsenal fans & Football fans alike. In depth stories about major incidents while at the club for the Arsenal fans & strong opinions about the technicalities of the game for the neutrals. Must read!

I always prefer it when an author reads his / her own autobiography as you tend to get a better feeling for the person hearing them speak their own story. Arsene Wenger is re-known for his intellect and for his analytical approach to football management. In this he comes over as measured and considered and never strays too far from his love of the game and, in particular, his love of Arsenal Football Club where he spent 22 years in charge. He talks of his early years at Strasberg with affection and talks of how he saw this as a "laboratory of football" in which he honed his style. He does not talk too much about individual players or specific matches preferring to explain his philosophy towards the beautiful game and how he never ceased to set higher aspirations culminating in the 2003/04 "invincibles" season. He laments his lack of success in the Champions league. The financial consequences of the move from Highbury to the Emirates Stadium was to mean that Arsenal would never reach the same success on the field but Wenger considers that this was a price worth paying. This is a very serious and analytical summary of an amazing career in football. Genius as Mr Wenger may be when it comes to running a football club, having listened to this book I would not want to be stuck in a lift with him.

Fascinating insight into the man that changed the premier league. Best autobiography I have listened to so far. Even better that is read by the man himself as well

What a book! Great insight from childhood to now. I am a massive fan of Mr Wenger as he IS THE ORIGINAL game changer in this modern football era. You can understand why he is the detailed person he is from his childhood days. His thought process going into tasks is immense, his determination is relentless and his focus is unbreakable. Offers fantastic examples of leadership but always refers to passion and belief. Mr Wenger would be the one person who we all would like as a mentor, not just in football, but in life. I pre-ordered this audiobook and have listened to all whilst working from home. The term ‘Legend’ has been diluted in my opinion when describing someone but I can honestly say Mr Wenger is a ‘Legend’ and a ‘Gentleman’ Thank you

As a life long fan of The Arsenal it wasn’t difficult to choose this book but it was wonderful to hear the story behind the move from Highbury to the Emirates and the life of the wonderful Arsene Wenger who made this possible. The story of the Invincibles that was masterminded by a man who sees the game of football as simply beautiful. Thankyou Arsene for all you gave to my boys at the club and Thankyou for the insight into your amazing life.

Simply the best. A true legend.

Arsene Wenger is fantastic and this insight is just a snippet, but one not to be missed. Lots of great time bits. I want more!

It's okay but don't expect any dirt

Have to read as arsenal fan but not much we don't know really. Would love a second book that tells all.

A bit of a disappointment

I love Arsenal, Arsene Wenger and the history of the Premier league, but this autobiography doesn't share many stories or go in depth about anything I thought it would. I bet he's got tonnes of stories in his locker but he just touches on the odd one and swiftly goes to the next topic.

narrated by Arsene Wenger himself, what an immersive listen. as a gunners fan, this was an amazing eye opener and thank you Arsene for everything you did for arsenal!

incredibly intelligent man - many arsenal fans would agree. more than just a manager and I think this book is a testament to that. I would recommend this book

There Is Only One Arsene

Hearing Arsene read his own story opens up a lot about himself. I fully understand his sacrifice now. God Bless Arsene

Only scratches the surface....

Arsene sounds like he's reading stats rather than telling us the full story of what must have been a tumultuous career. There's a much deeper story somewhere here, maybe it'll take a good and trusted biographer to get it from him. Nothing on Mourinho, very little on Fergie, only a superficial run down on the players themselves. A missed opportunity.

Perhaps that's the sign of a good book. At 6hrs 40mins the book is roughly split 50/50 between pre-Arsenal, and 1996 onwards. With 18 years at N4, I'm sure 7 hours or Arsenal-only chat wouldn't have been a stretch. It felt like there was more to give here: not one mention of Mourinho, not much insight into Fergie battles. But still a must read for lovers of the Prem in the Carling and Barclays era.

Rare breed of a gentlemen

Great insight to his thoughts. His absolute loyalty, how he reflects, immense desire to win and class class class. Build him a statue! He deserves it!