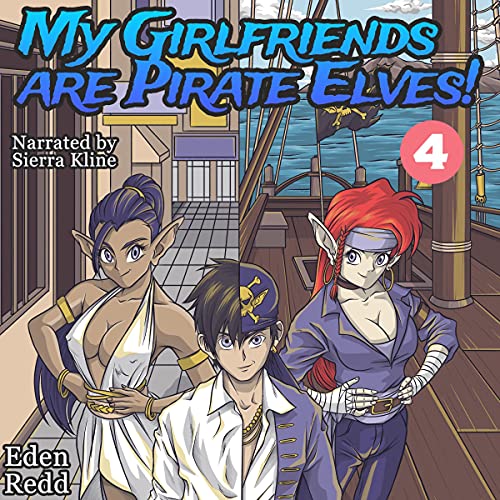 My Girlfriends Are Pirate Elves!, Book 4

Jon, Lilly, and the crew of the Dark Heart return to Urth by the skin of their teeth, not sure what the future will hold for the band of pirates. With two new members of the crew, a book written in ancient dragon tongue, a primordial myth, and dangerous spies everywhere, the crew must come together to confront enemies on Urth and from the Aquris realm.

Will Jon overcome a desperate battle between his honor and the pirate life? Will Lilly find an ancient treasure that none have seen since the age of dragons? Will the crew overcome their differences between the old and new crew members? Will Jon keep his brand new car and his sanity when both worlds come crashing down on him and those he loves?

My Girlfriends Are Pirate Elves! is a fun, sexy story of a nautical nature. It contains humor, outlandish adventure, lewd acts, everyday life, a lot of cursing, an expedition on the high seas, pointed ears, magical cannons, sharp teeth, a mage, and there might be a few giant monsters somewhere in there. This story is for mature listeners, 18 and up. Avast! There be elves in these waters!

I have been on the fence with this series. It's been ok nothing special. With that said the interaction between the brother and princess and the lack of reaction from the MC was enough for me to call it quits.

Seriously, Lady Redd, how do you continually find ways to improve on an already perfect story? Jon now has six, SIX sexy elf girlfriends! I’m just living vicariously through this guy. Not jealous at all. Nope. And the way you weave such an amazing piratical (is that a word? oh, well.) tale has me walking willingly into the spider’s web to accept my own destruction. Well done and keep ‘em comin’, ma’am.

Over 15 Hours of Adventure and Sexy Pirate Elves!

Wow! This book for is about double the size of all the other books and definitely double the fun. Over 15 hours of sexy pirate elves and non-stop adventure, what more could you ask for?!? FIVE STARS

A wild ride from start to finish.

Eden Redd knocks it out of the park yet again with book 4. Narrated by the fantastic candy voice of Sierra Kline.

This is a chonkers of a audiobook and it doesn't disappoint, picking up directly from book three. You get time with Jon and his family on earth and a rollercoaster ride on Akiris including some dastardly villains, unlikely allies, and sexy new friends. Eden does a wonderful job of keeping all the characters involved and relevant whole adding interesting new characters to the crew of The Dark Heart. And ooooh the sexy times, it's Eden Redd, you just KNOW they are deliciously good. ;)

This book had some of the best ups I've seen by this author and this work is truly inspired. Seriously, give My Girlfriends are Pirate Elves 4 a shot, you won't be disappointed.

So good! Fun harem story that develops the actual emotional relationship between the characters. Sierra Kline is a blessing to my ears.

This was the best book of the series so far. I have been waiting for this book to come to audible and can't wait for the next one.