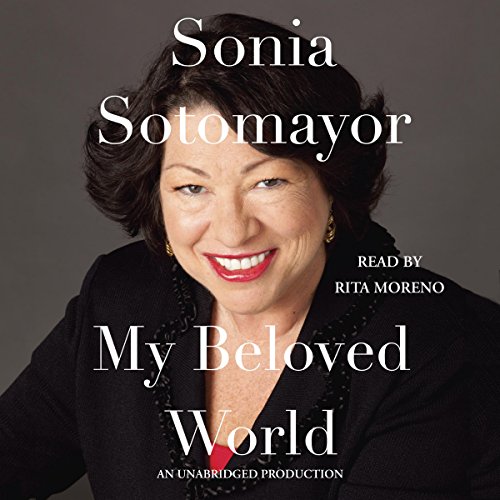 The first Hispanic and third woman appointed to the United States Supreme Court, Sonia Sotomayor has become an instant American icon. Now, with a candor and intimacy never undertaken by a sitting Justice, she recounts her life from a Bronx housing project to the federal bench, a journey that offers an inspiring testament to her own extraordinary determination and the power of believing in oneself.

Here is the story of a precarious childhood, with an alcoholic father (who would die when she was nine) and a devoted but overburdened mother, and of the refuge a little girl took from the turmoil at home with her passionately spirited paternal grandmother. But it was when she was diagnosed with juvenile diabetes that the precocious Sonia recognized she must ultimately depend on herself. She would learn to give herself the insulin shots she needed to survive and soon imagined a path to a different life. With only television characters for her professional role models, and little understanding of what was involved, she determined to become a lawyer, a dream that would sustain her on an unlikely course, from valedictorian of her high school class to the highest honors at Princeton, Yale Law School, the New York County District Attorney’s office, private practice, and appointment to the Federal District Court before the age of 40. Along the way we see how she was shaped by her invaluable mentors, a failed marriage, and the modern version of extended family she has created from cherished friends and their children. Through her still-astonished eyes, America’s infinite possibilities are envisioned anew in this warm and honest book, destined to become a classic of self-invention and self-discovery.

If you could sum up My Beloved World in three words, what would they be?

I loved learning more about this important person in American society - how she grew up and through self determination became a very successful person in a society that was pretty hostile to her in her early years.

Did Rita Moreno do a good job differentiating all the characters? How?

She did a pretty good job but there were obvious places - a lot of them - where there were retakes of a sentence or so and you could totally tell that one was recorded out of sync with the other.

Every woman should read this book! She had a lot to overcome and did it all with finesse. Many great stories about her life!

Great narration, with an accent!

I read this after a recommendation from my grandparents, and was pleasantly surprised! I have recommended this to numerous others at this point. Think it's a hidden gem among autobiographies.

I listened to this book in one sitting. It is well written and covers Sotomayor life from childhood to when she is first appointed to the bench. It appears to be as honest as one can be telling her own story. She notes that as a child she inspired to become a lawyer by Robert Kennedy and then saw how the actions of Judges during the Civil Rights battles in the south had major effect on the country, so she then wanted to become a Judge. I was empressed at her ability to concentrate on whatever she was doing. I also noted she pointed out that when in school she felt overhelmed by an assignment or what she had to learn, she broke it down into section and worked her way through section by section. I also noted that in every situation she was in, or person she met, she said to herself what can I learn from this situation or person. I think that is a great attitude. I think that she was open with the reader about the challange she had as a child and an adult living with type 1 diabetes. This could be helpful to other people with chronic diseases. I think it was interesting that in her 30's she stepped back and looked at herself and then set to work on improving her people skills and interaction with family and friend. Not many people will take a hard look at their self and then set about improving their weak areas.. She also stopped smoking and worked on her health and exercise. She got to University and law school on academic scholarships and worked hard to excell at her studies. Instead of going into a large law firm she went to the NY city D.A.'s office to work. She obtained a great deal of trial experice on this job. She also got civil law experience in tradmark work and international law. She also points out how much she learned by serving boards and volunteering with non profit organization. I was impressed with her ability and attitude toward life as well as her intelligents I came into this book neutral and have come away a fan. I will now read all that will become available about Sotomayor.

A book so wonderful I can't wait until I share it

What did you love best about My Beloved World?

Her humanity. Ms. Sotomayer opened herself up with an unflinching candor with the dialog of her life and all it contains for the reader to share her journey, which is truly remarkable. The book navigates the reader through her early childhood, her family, friends, co-workers, and loves unashamedly revealing a story of courage, tenacity and compassion.My eyes were full of tears of joy when, only too soon, her book was done. I wished she were standing in front of me so that I could have hugged her and told her how much I thoroughly enjoyed the experience of listening to her memoir.From her own introduction to Rita Moreno's narration, the "sound" of her story was perfectly in sync with her experiences, taking the reader through an emotional and intellectual experience that hasn't happened to me in a long time.I am a reader of non-fiction primarily and historical figures specifically. My membership permits me to read 2 books a month and I do this with regularity. Some book are informative, some entertaining and some boring, not because the lives of the people were boring, but because there was an imbalance between the message and the delivery.This book has it all. It is rich in personal history and anecdotes, as well as surprises. Ms. Sotomayer is not only a successful attorney and judge. She is, or could have been, a successful psychologist, mentor, teacher, daughter, and family member. Her story and the way in which she has written it demonstrates a humble and grateful brilliant human being. The book is a wonderfully inspirational story for any woman and I am happily buying copies to send to my daughters and granddaughters. Thank you, Ms. Sotomayer for sharing.

The combination of early life recollections of family and experiences with her life as she moves up the educational ladder eventually to reach her position on the Supreme Court of the United States. She has amazing recollections of incidents and her dialog is never wordy or boring.

I think she loved the story herself because she tells it with the inflections and emotions it deserves. With a different narrator it could have lost a great deal of the excitement it had. Rita Moreno does a superb job of narration. The message of this book is inspiring and is meant as thus. That is why the narration cannot falter or the story can be diminished.

I listened to it over a period of 2 days. I rarely read a book so quickly but it grabbed my attention right from the beginning and didn't let me go until the end.

I can say that even though the book was written by an intellectual it was NEVER over my head. The legal-speak was explained and easily understood. And I was always brought back to the main event, the wonderful story of Ms. Sotomayer's life.

Inspirational -- NOT Political. Read it!!

Absolutely loved this book. I actually clapped when the audio was over. Not a political book at all, this is the ultimate Bronx / legal version of "A Tree Grows in Brooklyn" and "The Glass Castle." I want to read more books like this. Thank you Judge for writing it. I hope that men will also read it, I've asked my husband to - no pressure there, babe! Also, the narration was so perfect, and comforting, just love Rita Moreno, very fitting that she read this.

Mother was inspiring too!,
Well worth the read. Good information on affirmative action.
Inspiring for young people.

No Epilogue or Prologue

It was missing the Epilogue and Prologue that are narrated by Sonia Sotomayor. The iTunes version has it. This version is the same price and does not.

Can I be Sonia Sotomayor's BFF?

Where does My Beloved World rank among all the audiobooks you’ve listened to so far?

My Beloved World is up there in my top five or six audiobooks, along with Angle of Repose; Tim Robbins's The Great Gatsby; Code Name Verity; and Crossing to Safety. I didn't want it to end.

I love Sonia's spirit, her perseverance in spite of all the obstacles she had as a child. I feel as if I really know her - and that's rare for a U.S. Supreme Court Justice. I appreciate that.

Have you listened to any of Rita Moreno’s other performances before? How does this one compare?

Rita Moreno does a fabulous job. I have not heard any of her other readings.

I am so glad Barack Obama nominated Sonia Sotomayor to the Supreme Court. I cannot imagine a better choice! Her story is so inspiring, I want every kid to read My Beloved World or listen to it.

If you could sum up My Beloved World in three words, what would they be?

Inspirational, wonderful, motivational Read a previous review that this book was "self-serving" so not true...great stories, heartfelt and I want all my great-nieces/nephews to read this book. We need more of these stories! As a hispanic women growing up during the same time, though in a different place, I could relate to the many situations and challenges. I am happy Sonia got some (as little as it was) guidance on where to apply to college. Life is a fine line. So very proud that Ms Sotomayor is a person to admire. Thank you for sharing your story.

Really enjoyed - narrator's voice beautiful. I will re visit this book again. Lots of nuggets to zone in on - love Sonia's zeal and view of life.

A great telling of the early years of this judge

What was one of the most memorable moments of My Beloved World?

Great insights into what it means to be a scholar. Thoroughly enjoyed learning about the woman behind the robe. Definitely someone that would make a good dinner companion!

Captivating narrator who did not over dramatize