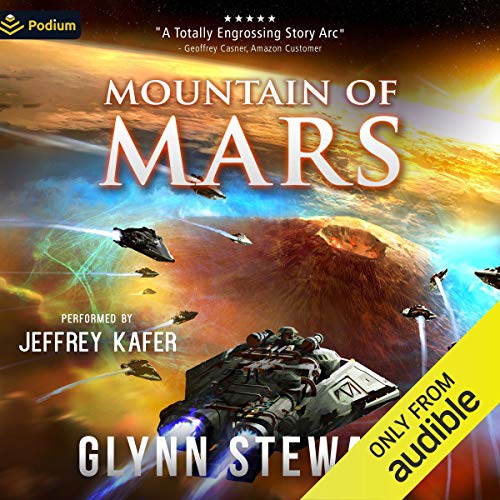 The Mage-King of Mars is dead. Chaos rocks Olympus Mons. A new monarch must rise - but she does not stand alone!

As the celebration of the victory at Legatus cools, a shuttle accident claims the lives of the Mage-King of Mars and his heir. The Crown and the Mountain fall to the Mage-King’s daughter, 16-year-old Kiera Alexander. She recalls Damien Montgomery, her father’s First Hand, to stand as her Lord Regent.

The pair are unprepared to govern but are thrust into the heart of Protectorate politics as the Mage-King had left behind everything from an unfinished war to an incomplete new Constitution.

Even as they get a handle on the list Kiera’s father left them, Damien is grimly certain of one thing: when it comes to the deaths of Kings, he doesn’t believe in accidents.

This entire entry in the book series was predictable

Overall It was enjoyable

Great book titiel ruined the series for me

Great book but audible has it listed as book 3. Super disappointed when i noticed halfway through is was listening to book 8. Ruined the series for me. The end of the description says book 8 but you don't see that part on your phone.

Another fast passed and good addition to the series. Like eating potato chips, my biggest complaint is that they are too short and the story is over too soon. This book and the series are light but fun Space Opera SCIFI. Lots of action and intrigue, but light on the science.

OK, we had plenty of build up. Start with the human harvesting already. seriously, we are waiting

Last book for me

Last book in the story for me... main cast is gone and we get the b-cast instead in the next book if you wanna know what happens next ask reddit

Another incredible book by Glynn Stewart! Awesome story, real and great characters, you can't stop listening once the book is started!

Definitely worth the wait the only problem is that it had to come to an end !!!

the story is good, I have been waiting for more personal continuation in the overall story arc. but this is just to short. it feels like it was rushed or that the editor cut to much out of it. hope the next book will be longer.

I have enjoyed the entire series and look forward to book 9 coming out soon. I will tolerrate the narrator because I want to know what happens next. However, the narrator makes it difficult to enjoy the story. He delivers every other line as if he is MCing a big fight. Every sentance that Damien or the Mage King speak are emphasized in a way that make them sound like egotistical self- important idiots. Thnk of the line, "Frankly my dear, I dont give a damn." and imagine every line from a particular charactor spoken with that much passion. Sorry this review is more about the reader than the book. But, when I recomwnd the audio to friends, I have to warn them that if they cant tollerate bad narration then they ahould read it instead of listening.

Jeffrey Kafer is an outstanding narrator he really brings Damien Montgomery and company to life.

The plot get thicker

it's the usual suspects, real bad guys, v the good guy's. I loved it ,definitely surprises. loads of action can't wait for the next installment.

waited a long time for this book and it was worth it. thus book has so many twists and action that I finished it in one go. like how its unfolding to reveal the name of ancient foe can't wait for next book.

havnt read these for a while but glad to get back into them. good story well presented

You have to listen to it

This evolving story continues to be brilliant. Love the characters. Love this author never fails to impress. Highly reccomended.

I am writing this because the app won't let me listen to it again. one