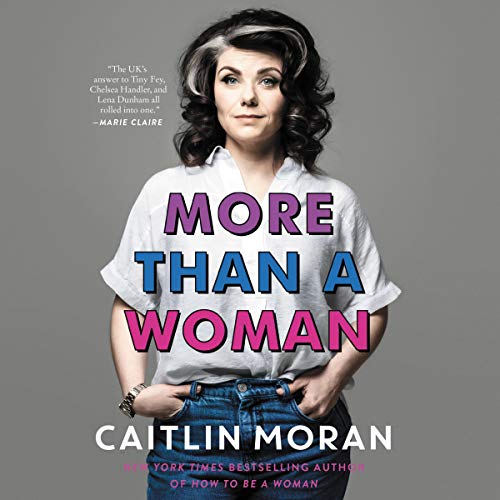 More than a Woman

The author of the international best seller How to Be a Woman returns with another “hilarious neo-feminist manifesto” (NPR) in which she reflects on parenting, middle-age, marriage, existential crises - and, of course, feminism.

A decade ago, Caitlin Moran burst onto the scene with her instant best seller, How to Be a Woman, a hilarious and resonant take on feminism, the patriarchy, and all things womanhood. Moran’s seminal book followed her from her terrible 13th birthday through adolescence, the workplace, strip-clubs, love, and beyond - and is considered the inaugural work of the irreverent confessional feminist memoir genre that continues to occupy a major place in the cultural landscape.

Since that publication, it’s been a glorious 10 years for young women: Barack Obama loves Fleabag, and Dior make “FEMINIST” T-shirts. However, middle-aged women still have some nagging, unanswered questions:

Can feminists have Botox?

Why isn’t there such a thing as “Mum Bod”?

Why do hangovers suddenly hurt so much?

Is the camel-toe the new erogenous zone?

Why do all your clothes suddenly hate you?

Has feminism gone too far?

And who's looking after the children?

As timely as it is hysterically funny, this memoir/manifesto will have listeners laughing out loud, blinking back tears, and redefining their views on feminism and the patriarchy. More than a Woman is a brutally honest, scathingly funny, and absolutely necessary take on the life of the modern woman - and one that only Caitlin Moran can provide.

Sorry your life is miserable.

This is for a very small audience of those who decide to be miserable first. Then later in life figure out what really matters in life. Only the last chapter is inspiring... Only took a painful long life to figure it out. Sorry your life sucked.

So funny and so dead on accurate

As a middle aged woman I can totally relate to what the author is writing about.....I am getting ready to embrace and love middle age and becoming a hag happy and content in the fact that I’d never want to be a man.....cheers Caitlin you’re my hero!!!

I laughed. I cried.. I laughed and cried at the same time. Loved it.

Yes, definitely worth listening to. I am glad I listened to her first book, How to Be a Woman first. This was a brilliant follow-up from the older perspective, after having even more life come at her. Every woman should run to this and feel the support it provides.

I could go on and on about how funny, brilliant, heartbreaking, wise and strong Caitlin Moran’s latest book is (like all her others) and how I love her voice, literally and figuratively, but I have to bring all the donations I’ve gathered while listening to the thrift store. I was so inspired and energized by listening to her that I finally (almost) have it done.

Hit the nail on the head!

Caitlin Moran does it again. I love all her books and this one is no exception!

F**king brilliant, funny, intelligent and 100% spot on. I’m inspired and sharing this book with friends & family male and fe.

You”ll love it 💚 and if you are a middle aged woman by the last word you ll be ready to take on the next task, action, speech, meeting, relationship, therapy session beaming 😁 Thank you Caitlin Moran.

Every word resonated with me, as a single working mom. It’s really about how to be human, though. Her thoughts on what men might be missing for their own happiness were completely fresh to me. And, she’s funny.