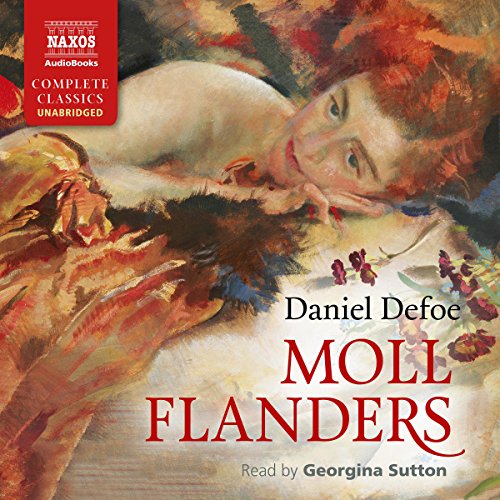 "The fortunes and misfortunes of the famous Moll Flanders, who was born in Newgate, and during a life of continue'd variety for three-score years, besides her childhood, was twelve year a whore, five times a wife (whereof once to her own brother), twelve year a thief, eight year a transported felon in Virginia at last grew rich, liv'd honest, and died a penitent."

So begins Moll Flanders, Daniel Defoe's honest portrayal of one woman's struggle for economic survival in an unsympathetic world. Told with uncompromising directness and an extraordinary empathy, it is, as Virginia Woolf once claimed, "one of the few English novels we can call indisputably great".

Moll Flanders is a wicked creature but a lively narrator; and Georgina Sutton is a delightful reader. After a lifetime of sexual indulgence and theft, Moll ends up happy and repentant on the Eastern Shore, managing a plantation with her husband and reunited with her son - the product of another marriage to a man who turned out to be her brother.

It's a sparkling tale that shows off Defoe's skill with characters and dialogue. It's written in the first person, as if Moll (not her real name, she assures us) is writing her own memoirs. I found Defoe's impersonation of a female narrator convincing. (I should note that when I mentioned this over breakfast one morning, my daughter said: "How would YOU know?" Point taken. All I really know is that I found myself returning to the audiobook with pleasure many times during the day.)

What a delight to travel back three hundred years and make new acquaintances. Highly recommended.

What a difference a few decades can make! I seem to remember having a lot more sympathy for the heroine the first time I read this. This time, Moll began to grate. As many times as she bemoaned her fate with a cry of - and I, without a friend in the world - you'd think she'd try to cultivate a few before she got into another pickle. She doesn't. You get very little sense that she cares about anything outside her own small orbit. Ye gods, after having and abandoning so many children I lost count, she claims her son in the colonies is her only child!

But I quibble. It's still fascinating to read/listen to this for what it is: a very early example of the English language novel. It's not at all explicit, but it's frank, and I have to think it's a pretty good depiction of how difficult life could be for a poor woman in 17th century England.

Georgina Sutton is excellent as the narrator.

What an amazing tale--and superbly read! Long, but I stayed with it. And am so glad I did.

I was assigned this book for a class and wish I could've ended the semester with something that had more applicable commentary to today's world, whereas, this book had none.

loved the book, very funny in places and will recommend it to my friends.... Thank you !!!

A story from years gone by

This story may be almost 400 years old but it still resonates today, a wonderful story of survival from a time when it was hard to be a woman and even harder to be a woman with no money, family, friends or connections. Mill Flanders is brave, ingenious, resilient and damn right lucky!

reading this book was the dullest obstacle in my university career, but this audiobook saved me. I actually enjoyed moll Flanders and listening on 1.5x speed it's a lot quicker

wasn't as interesting as i thought

couldn't get into the story line. got bored quite quickly. disappointed as was looking forward to a passed time novel.