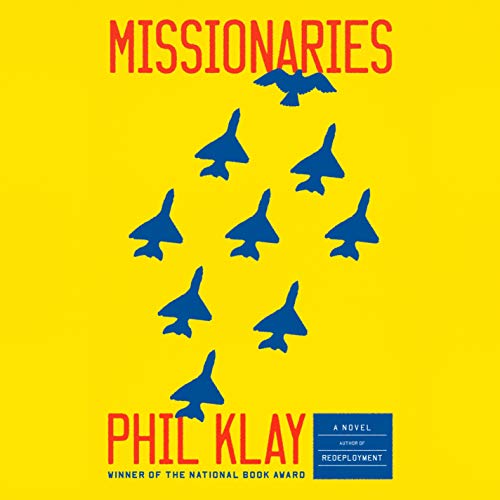 "What happens when a novel becomes more than a novel? It becomes a prophecy. Phil Klay has written a prophecy." (Elliot Ackerman, author of Red Dress in Black and White)

"Phil Klay's Missionaries is a big, rich, clear-eyed book about death and life; wise, compassionate, and yes, as cynical as it needs to be when necessary, but full of vivid people caught up in that organized human violence which is our species' haunting passion. I've maybe never read a war novel this good." (Ayad Akhtar, Pulitzer Prize-winning playwright of Disgraced)

"Missionaries is an urgent, detailed, compassionate and quietly furious novel about America and her Forever Wars. Intensely readable, exciting, funny and heartbreaking - it will change you." (A. L. Kennedy)

One of President Obama's Favorite Books of the Year

“Mr. Klay’s bravura novel homes in on the ground-level consequences of American interference in Colombia’s ongoing civil war and tumultuous peace process. But the engrossing local conflict is only part of the book’s revelatory, panoramic portrayal of the remote yet interconnected ways that American-sponsored wars are waged across the globe.” (Wall Street Journal)

The debut novel from the National Book Award-winning author of Redeployment.

A group of Colombian soldiers prepares to raid a drug lord's safe house on the Venezuelan border. They're watching him with an American-made drone, about to strike using military tactics taught to them by US soldiers who honed their skills to lethal perfection in Iraq. In Missionaries, Phil Klay examines the globalization of violence through the interlocking stories of four characters and the conflicts that define their lives.

For Mason, a US Army Special Forces medic, and Lisette, a foreign correspondent, America's long post-9/11 wars in the Middle East exerted a terrible draw that neither is able to shake. Where can such a person go next? All roads lead to Colombia, where the US has partnered with local government to keep predatory narco gangs at bay.

Mason, now a liaison to the Colombian military, is ready for the good war, and Lisette is more than ready to cover it. Juan Pablo, a Colombian officer, must juggle managing the Americans' presence and navigating a viper's nest of factions bidding for power. Meanwhile, Abel, a lieutenant in a local militia, has lost almost everything in the seemingly endless carnage of his home province, where the lines between drug cartels, militias, and the state are semi-permeable.

Drawing on six years of research in America and Colombia into the effects of the modern way of war on regular people, Klay has written a novel of extraordinary suspense infused with geopolitical sophistication and storytelling instincts that are second to none. Missionaries is a window not only into modern war, but into the individual lives that go on long after the drones have left the skies.

So a little bit about myself: I guess you could call me career military, having been in roughly a decade. I read Redeployment at the beginning of my career, so I guess it's only fitting Missionaries dropped somewhere in the middle. Why do I mention this? I mention it because I don't think there's a modern author who so accurately captures the essence of today's United States Military. The machinations, bureaucracy, the meandering nature of the war machine--it's all there, in a cold, honest, saddening way.
But Klay goes farther, and captures the human spirit incredibly poetically. There were several moments I had to pause the player and rewind what I just heard because the description was just so beautiful, even if the material was horrific at times. The man truly has a way with words.
For those without a military background, I do wonder if they'd get lost a little. Hell, there's so many people in the military that wander aimlessly, would I blame civilians for not understanding what happens? No. But give it a try. I wholly recommend this novel.

One of the best books I’ve ever read. Phil writes beautifully. And he captures many of the sentiments I’ve felt but have been unable to express during my many overseas deployments in the Marine Corps. This is a masterpiece.

I appreciated the separate stories eventually becoming a most intriguing development. Excellent writing. Would recommend it highly.

This book had great reviews from the press but I thought it was overrated. I frankly don’t get it.

just not that good

Story is all over the place.
I stopped listening. It will be a return for me.

Great listen for everyone.

Awesome story for military enthusiast's, civilians, journalists and more. Alot of gore and cursing at times, so listener discretion is advised. Overall great story and take on wars in the middle east and south america.

Compressed but palpable for civilians and military

An outstanding read. It gets far more philosophical and internal than is necessary, but the web Klay spins catches you none the less. The entire book keeps you interested, but the last few chapters describe about as honest an assessment of an Ops Center as is legal to describe. It is raw and honest about the violence and misdirection that causes and results in modern warfare. Missionaries doesn't pull punches, just an outstanding read that military professionals and civilians will enjoy alike.

Engaging and thought-provoking story. I think I would have enjoyed it more if I had read the print version.

A well told story of war by those participating in it, willingly and unwillingly.