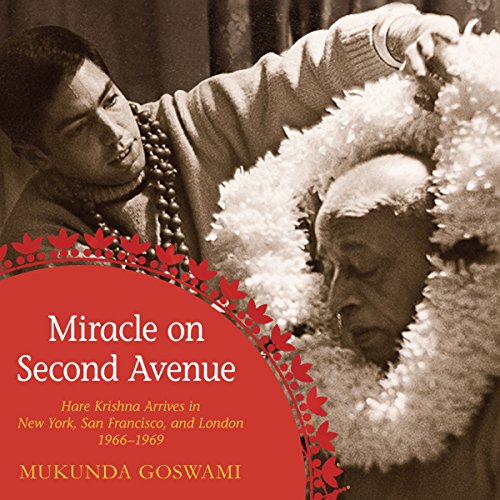 Miracle on Second Avenue is a short, carefully researched documentary book written in a you-are-there style that catalogs the start and growth of the Hare Krishna movement. Miracle on Second Avenue won the 2012 National Indie Excellence Award for Biography. The work is a memoir of Mukunda Goswami, one of the pioneers of the religious group that is now known throughout the world formally as the International Society for Krishna Consciousness (ISKCON). Miracle is a series of historical events that include the movement's founder, A. C. Bhaktivedanta Swami, and his interactions on two continents with the author over the three-year period, from August 1966 until December 1969.

the story was nice but the narrator was monotone, and sounded disinterested which made this a struggle to finish. the chapters were a bit choppy and seemed to end abruptly which made me revisit the app to ensure i was not missing any chapters. this feeling couldve also been a result of the narrators delivery.

What a beautiful story

This is a beautifully written and narrated first hand view of Makunda Goswami and his role in starting ISKCON in the 1960's. I fell in love with everyone in the book and have an even deeper understanding of A. C. Bhaktivedanta Swami Prabhupada and the profound love he had for the movement and his clear vision that he carried forth. A wonderful read, I finished in a few days because I could not put it down.

Good story but delivery just sucks. First person perspective from Mukunda but the deli every leaves MUCH to be desired. Really distracting points - abrupt transitions, having to hear him flip the pages he’s reading from, listening to him swallow/mouth noises, recording setting (like sitting in an empty room and reading).

Would have been a lot more tolerable to get through if it had just been professionally done.

This is an awesome book and narration be Mukunda Goswami was just as brilliant. We really enjoyed the content and the delivery. I highly recommend this book. Good insights into the early days of the ISKCON movement. Thanks to all for this amazing book.

loved every word of it,great book on santander dharma,I read it again and again, thanks

was excited to listen so glad I did, wonderful magical story, and to finish