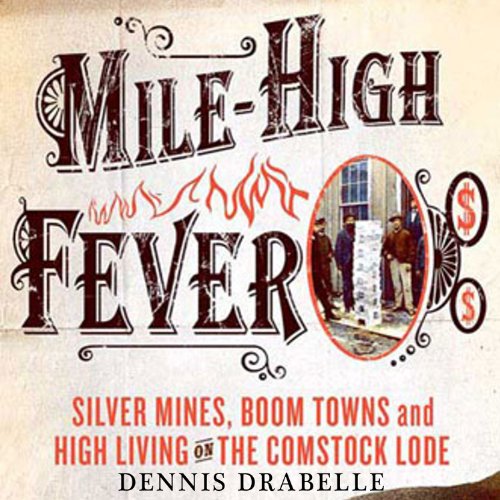 In the rip-roaring, true saga of the Comstock Lode, Dennis Drabelle skillfully brings to life silver-mining in the late-nineteenth-century American West. The immense wealth extracted from the Lode spurred the growth of San Francisco, and Virginia City, the hell-raising town that sprang up above the mines, was the inspiration for the TV series Bonanza.

Innovations in Comstock mining - the use of underground “cubes” to avoid cave-ins and of elevators to bring ore to the surface - was adapted to make possible the modern skyscraper.The boom also accentuated less positive themes in American history. The growth of Virginia City brought ruthless treatment of Native Americans. The risks and expenses of deep mining lent themselves to stock-market manipulations and fraud on a grand scale.

To opportunists such as William M. Stewart, a mining lawyer and future U.S. Senatorwith a tenuous grasp of ethics, the Comstock experience meant that the West belonged to the crafty and the strong.

Perhaps the boom’s most lasting legacy, however, was the education it gave to a great American writer: Mark Twain. In Virginia City, the young journalist learned the value of plain but salty Western speech and saw how he might use the vivid reality of the frontier in the great books of his future. Full of colorful characters and get-rich-quick schemes, Mile-High Fever brings to light one of the least-known but most pivotal episodes in American history.

I enjoyed this title about mining The Comstock Lode. I was surprised to learn of all the corporations in shenanigans that went on with all the leaders of the mines. I did not know that the mines we're not individuals that owns them but corporations that were dishonest and manipulative. this is very informative and worth your time if you want to know anything about the Comstock Lode. I am surprised there is not more written about it on Audible. the subject can be little dry at times but stick with it you will learn a lot.

Great Book about Virginia City and the Comstock

The history of Northern Nevada's mining boomtown which highlights the impact of mining technology on skyscrapers in New York, the influence of the mine barrons on San Francisco and politics of the times as well insight on some of the players in the Comstocks drama which at times was comedy but more often tragedy. Also unexpected and curious commentary on the similitatries to gambling and stock speculation.