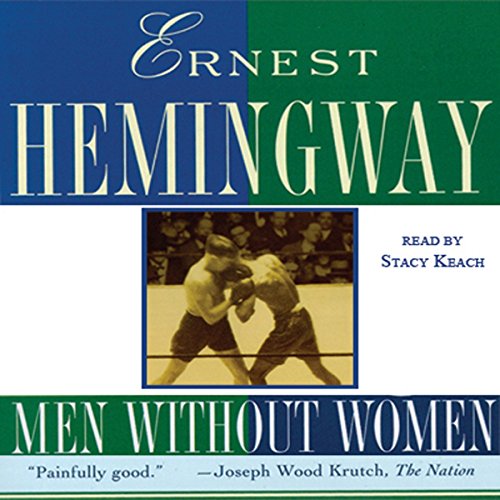 First published in 1927, Men Without Women represents some of Hemingway's most important and compelling early writing. In these 14 stories, Hemingway begins to examine the themes that would occupy his later works: the casualties of war, the often uneasy relationship between men and women, sport and sportsmanship.

In "Banal Story", Hemingway offers a lasting tribute to the famed matador Maera. "In Another Country" tells of an Italian major recovering from war wounds as he mourns the untimely death of his wife. "The Killers" is the hard-edged story about two Chicago gunmen and their potential victim. Nick Adams makes an appearance in "Ten Indians," in which he is presumably betrayed by his Indian girlfriend, Prudence. And "Hills Like White Elephants" is a young couple's subtle, heartwrenching discussion of abortion. Pared down, gritty, and subtly expressive, these stories show the young Hemingway emerging as America's finest short story writer.

it never really grabbed me and made me want to listen, but it had some nice stories. it was a good listen.

A collection of excellent shorts

Excellent early Hemingway. Very approachable & good for a quick trips as you can bang out a little story here & there

I loved Old man and the sea and decided to get this book. I was bitterly disappointed. Do not waist your time.

Outdated but not in a charming way

narration is flat. the short stories I did fully comprehend I did like. but one or two were just confusing. the bull fighting and boxing ones were quite entertaining. Hemmingway is at his best when he does story like those. but hills like white elephants was very disappointing and yes I understood what it was about. it needed more backstory like most of them to give the reader the full emotional effect. also the one about the roman soldiers made me angry. why were they speaking like the gangster in the previous story. but overall I was the portrayal of native and African Americans that soured my feeling on this collection of tales. they are a snapshot in time and we have progressed societally to much. its best not to use this as your time machine.

it was good, just maybe not my usual. it was educational from the point of view that it was all about men. short stories all regarding men and their roles.

I would because each story is interesting, short and sweet. Does not get dull or boring, if you find that the particular story does not suit you its not long before the next one starts.

Which character – as performed by Stacy Keach – was your favourite?

Think this is my first and she did a great job narrating the stories. Would absolutely pick up more books with her as the voice

Really liked the bullfighting one, think it was the first. Really set the tone and gave a hint of what was to come. The concept is very interesting and there is no shortage of things men does for women. Not to mention what men with out women does to get women. Really liked the one about the boxer as well, really emotional and give a lot of depth to a character in a very short amount of time!

A wonderful collection of short stories! I listened to it while working at my desk, it is an interesting companion to dull and dreary working hours. There are many interesting and varied stories and if you like Hemingway's narratives, and you're like me, you will want to listen to them again and again.