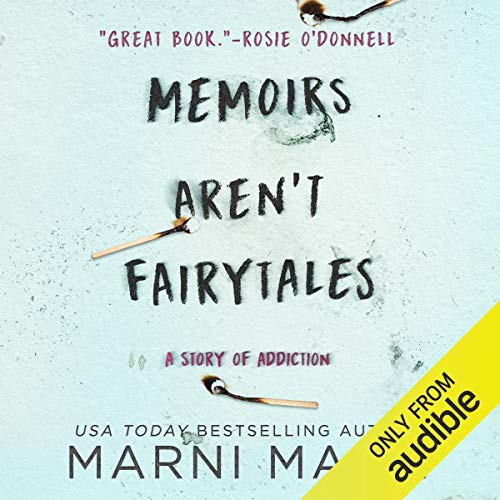 Leaving behind a nightmarish college experience, 19-year-old Nicole and her best friend Eric escape their home of Bangor, Maine to start a new life in Boston. Fragile and scared, Nicole desperately seeks a new beginning to help erase her past. But there is something besides freedom waiting for her in the shadows - a drug that will make every day a nightmare.

With one taste, the love that once flowed through Nicole's veins turns into cravings. Tracks mark the passing of time, and heroin's grip gets tighter. It holds her hand through deaths and prostitution, but her addiction keeps her in the darkness. When her family tries to strike a match to help light her way, Nicole must choose between a life she can hardly remember, and a love for heroin she'll never forget.

A trip down the rabbit hole

Would you listen to Memoirs Aren't Fairytales again? Why?

I can't. This story was so gritty and raw. The subject matter is very intense and the author does not sugar coat it.

Nicole because this was her journey.

There is a scene where they go to a party being held by Eric's boss at a really nice place on the beach. And there are fireworks...

Once you start, what lengths will you go to to cover it up?

I received a copy of this audiobook in exchange for an honest review. I did enjoy this book it felt real, gritty and honest.

I actually thought this was nonfiction because it was so believable and realistic. Sadly, this could be the story of far too many people. The narration was also superb and could easily be taken as the author's own true narrative.

The Audible algorithm recommended this book to me based on the fact that I love addiction memoirs and have listened to more than ten of them, all true accounts of the human struggles of addicts suffering through incredible difficulties, usually culminating in their cautious optimism about their tenuous recovery.

My first problem with this book is that it is not a memoir. It's fiction. Specifically, it's a young adult novel, with all the annoying trappings of one. Because I've listened to so many addiction memoirs, I immediately became suspicious that this story didn't have the ring of truth, Googled it, and discovered it was just a novel. Okay. Whatever, it could still be interesting, I thought, so I kept listening. I'm irritated that I was manipulated into choosing this book based on its misleading title, which I feel was a calculated decision on the part of the author to capitalize on people's desire to hear true stories, especially people who have themselves struggled with addiction and are looking for kindred spirits and inspiration on their own journeys of sobriety.

Additionally, memoirs may not be fairytales, but this ultra-saccharine YA book is nothing but a thinly disguised morality tale. It makes me sad that someone would write something like this with a teenaged audience in mind. Nicole, or "Cole," the guileless protagonist, who is given a trauma-porn-style gang-rape backstory in lieu of any compelling personality or motivation, leaves college in order to start fresh. Almost instantly, she's got a two hundred dollar a day cocaine habit.

Things that happen to Nicole in very short succession due to her heedless plunge into addiction: Sexual assault by her boss. Sex with gangbangers in exchange for heroin. Graduating to shooting up heroin like a week after she smokes it for the first time. Eviction from multiple apartments. The death of a friend due to overdose, and subsequent obfuscation of her own involvement from law enforcement. Living in seedy residential motels with a racist caricature of a prostitute named "Sunshine" and turning tricks. Prostituting herself to members of a biker gang. Threatening her gay brother with exposure if he doesn't give her cash. Overdosing. Getting shot through the chest and getting out of the hospital a few days later. Becoming pregnant. You get the idea--it's like the script for a Lifetime movie, or a warmed-over, even more poorly researched version of Go Ask Alice.

This is where this book truly lost me. It turns into a pro-life parable about how Nicole's addiction makes her so selfish, that she miscarries, or "aborts her own baby" as the author puts it, after taking a massive dose of heroin. This is directly after she decides, breathlessly, while she's literally seconds away from getting an abortion, that "she would lie, steal and turn tricks for heroin, but she will not kill [her unborn child] for heroin," despite having absolutely no resources to care for the baby, and despite the fact that she is eleven weeks along and cripplingly addicted to heroin, which she has been shooting copiously throughout the pregnancy. This is a GROSSLY irresponsible message to put in front of teenagers and it honestly disgusted me. Her decision to keep the baby despite her lack of resources and addiction is framed as the morally correct one.

If you like disingenuous tragedy-porn and tawdry nonsense that does a huge disservice to people who are actually struggling with addiction, read this fictitious account of Nicole's struggle, penned by someone who has clearly never experienced any of the ordeals she puts her protagonist through. Terrible things happen to addicts, it's true! But this story has a falseness to it that isn't due to the fact that it's a novel--it's abundantly clear that the author is having fun LARPing as an addict and is just filling in the blanks using sensationalistic BS from her imagination.

True, human stories of addiction you should read instead if you don't want your brain to melt out of your ears: Hit so Hard, I Forgot to Die, How to Murder Your Life, Girl Walks Out of a Bar, Drunk Mom: A Memoir, Drinking: A Love Story, or Blackout: Remembering the things I Drank to Forget.

Narration very good. Detailed story. I can't wait to read the next book. Could not put it down.

What did you love best about Memoirs Aren't Fairytales?

Sadly, I learned what heroin can do to a person. I feel like I'm starting to understand the hold it has. A loved one is in the beginning stages of this book and it terrifies me to know that she may follow the same path.

What was one of the most memorable moments of Memoirs Aren't Fairytales?

When Eric overdosed. I thought for sure that would be the wake-up call moment.

What does Arden Hammersmith bring to the story that you wouldn’t experience if you just read the book?

The emotion, or lack thereof. The survival from one hit to the next, tone. You can't get that from a book.

When Michael expressed his tough love. I'm sure it was the hardest ever to have turned around and walked away. And when he appeared like an angel, only to leave as an angel.

I had to stop listening here and there even though I so badly wanted to hear more. Some parts were so frightening because I was afraid of what might happen next. This is so out of my realm of understanding and my lifestyle that every chapter just shocked me to the core, although I learned so much as my loved one makes the same statements, and has the same skewed view of denial.

I've never used the word "riveting" before but I think this best describes how I feel about this book! I can't stop listening to it. It depicts the very real struggles of being in active addiction. I know all to well as I am 4 years into recovery now. love this book!

Important listen for the time

Not an easy or light story, it's depressing and sad but so very important given the epidemic happening right now, especially in my home state of NH (the story takes place in Boston). This honest story doesn't skimp on details or try to make addiction romantic- it is truthful about the pain and loss drugs can cause.

loved it! unbelievable what drugs can do to someone.. narrator is the best!!I know each character.

Loved it! Great story, riveting. I couldn't put it down. 2 times listening to finish.

Would you consider the audio edition of Memoirs Aren't Fairytales to be better than the print version?

I did not read the print version

The truth in addiction and recovery. It was blunt, cringe-worthy, stomach-turning at times, but it told a human story without all the fluff.

Have you listened to any of Arden Hammersmith’s other performances before? How does this one compare?

I loved the narrator's performance.

Yes. I felt like I was right there on the journey, the pain, heartbreak, rolling around at bottom and the struggle out into the light. There were no promises made, no fairytales, just a day in the life, and stringing a bunch of those days together.

I was given a copy of this audiobook in exchange for an honest review.