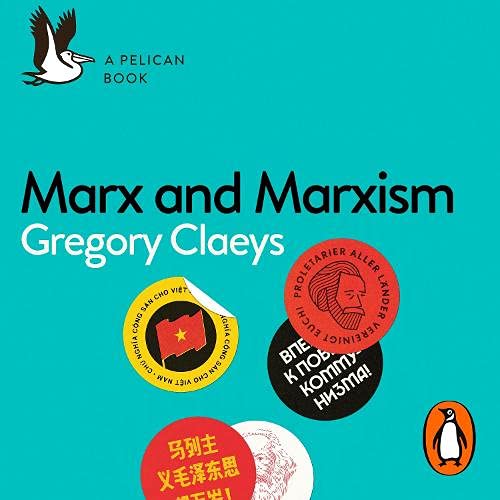 Penguin presents the audiobook edition of Marx and Marxism by Gregory Claeys, read by Michael Gould.

Why was Marx so successful as a thinker? Did he have a system, and if so, what does it consist of? How did Marxism develop in the 20th century, and what does it mean today?

Karl Marx remains the most influential and controversial political thinker in history. The movements associated with his name have lent hope to many victims of tyranny and aggression but have also proven disastrous in practice and resulted in the unnecessary deaths of millions.

If after the collapse of the Soviet Union his reputation seemed utterly eclipsed, a new generation is reading and discovering Marx in the wake of the recurrent financial crises, growing social inequality and an increasing sense of the injustice and destructiveness of capitalism.

Both his critique of capitalism and his vision of the future speak across the centuries to our times, even if the questions he poses are more difficult to answer than ever.

Best that I’ve read on Marx or on Bolshevism, and I’ve read a fair bit on both in the past few years. A good balance of description and evaluation, periodically stepping back to say what is novel or what is deficient in some new doctrine, or to compare one historical moment or figure with another that we’ve already encountered, in ways that I have rarely seen done so well. As soon as I finished the book, I immediately began reading it again from the beginning. I very rarely write reviews, but this is a book deserving of praise.

Having read various works on Marxist literature and Histories of Communism, this work has a few insights to make it not just an overview of familiar terrain.
The main strength is the biography of Karl Marx and the evolution of his thinking. In this regard, this book becomes an essential work not just on Marxism, but on Socialism as a whole.
Many mistakenly associate Marx as the progenitor of Socialism or Communism, however, he left what was perhaps the most coherent and influential program of socialism, and as such, stands taller in History than other socialists like Robert Owen or Communists like Proudhon.
The largest bulk of the book concerns Marx and Marxism, however, the second part of the book provides a World History of Communism of sorts, with particular attention given to Lenin and Mao's China.
As an avid reader on China, there was little new that it could bring to this particular reader, however, for the more unfamiliar, these chapters are immensely readable and informative.
The chapter on Lenin and the Russian Revolution is simply electrifying and impossible to ignore.
In comparison to other works, the world history of Communism cannot compare to Comrades by Robert Service, which is the definite account, however, that does not detract from this book in the sense that it is more bite sized and accessible.
The narration of Michael Gould can become somewhat tedious at times as his voice can have a sleep inducing effect at times, but nonetheless a decent read overall.
Overall, an excellent book and a very good book for understanding the evolution and building blocks of Marxism.

An interesting overview of Marx and those who came after him

I’m generally familiar with Marx’s thought but still found this to be useful and interesting. I really enjoyed the last chapter which was able and willing to identify Marx’s shortcomings while highlighting where his thought could be instructive in addressing contemporary problems like inequality and climate change.

I don't think the concept of Marxism was explained well, it assumes a certain level of knowledge to start with. The examples of USSR and China do bring it to life better. Felt like the book needed to be longer to fully do the subject justice.