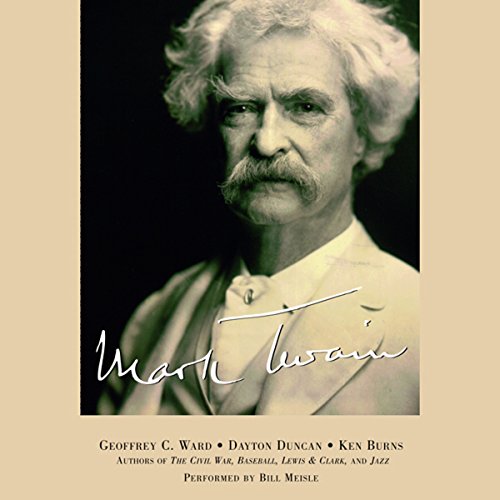 "Stands on its own merits as a fascinating account of Twain's extraordinary career¿" (Publishers Weekly)
A cogent, colorful portrait... provides the perfect introduction to Mark Twain. (Amazon.com)

Ernest Hemingway called Huckleberry Finn "the best book we've ever had. There was nothing before. There's been nothing as good since." Critical opinion of this book hasn't dimmed since Hemingway uttered these words. Mark Twain was the most famous American of his day, and remains in ours the most universally revered American writer.

From Ken Burns, Geoffrey Ward, and Dayton Duncan (authors of Jazz, Lewis and Clark, Baseball and The Civil War) comes this audio companion to the PBS film of the same name. It pulls together material from a variety of published and unpublished sources. It examines not merely Twain's justly famous novels, stories, travelogues, and lectures, but also his diaries and letters. The authors take us from Samuel Langhorne Clemens' boyhood in Hannibal, Missouri, to his time as a riverboat worker - when he adopted the sobriquet "Mark Twain."

Twain believed that "The secret source of humor itself is not joy but sorrow. There is no humor in heaven." This paradox fueled his hilarity and lay at the core of this irreverent yet profoundly serious author. With essays by Russell Banks, Jocelyn Chadwick, Ron Powers, and John Boyer, as well as an interview with actor and frequent Twain portrayer Hal Holbrook, this audio provides a full and rich portrayal of the first figure of American letters.

Listen to a conversation with Ken Burns.

This audiobook is a treat. It's actually three (short) books in one. The first is a five-hour biography, based on the Ken Burns documentary. The biography is well-researched, well-written, and well-narrated, and it's loaded with quotes, some of them extensive, from Twain and the people who knew him. Other biographies (like the one by Fred Kaplan) are more detailed, but this one covers all the main points in a concise and entertaining way. It doesn't shy away from the darker years, when many of Twain's loved ones had died and his attitude became more pessimistic and deterministic than ever.

The second part is a collection of short essays and extracts by Twain, chosen to illustrate both his wit and his range. I'm not sure what the organizing principle is here, but it's fun to listen to.

The third part is a collection of essays by some of the scholars who were interviewed for the documentary. They cover a broad range of topics, some biographical, some literary, some social: race, racism, and racist language are among the topics discussed in depth. One biographical essay is by Ron Powers, another Twain biographer who is himself represented elsewhere on Audible.com. This part also includes the transcript of an interview with Hal Holbrook, developer (and actor) of the one-man show "Mark Twain Tonight!". (Holbrook, at one point, remembers a quote from Twain that made me laugh out loud: "The problem isn't that there are so many fools in the world; the problem is that lightning isn't distributed right.") It's unfortunate that Audible doesn't carry Mark Twain Tonight! as a separate title (it IS available on iTunes, if you're interested).

I love Mark Twain. I loved this audiobook. The first part lays the groundwork, the other two expand on it. Taken together, they introduce many sides of this many-sided prince among writers.

This is a good introduction to the life of Twain, but it is more multimedia oriented than history oriented. It is missing vital pieces of his biography (esp. his pre-fame period) and it is utterly missing the analysis I like to see (not excessive, but enough to make the story more interesting). All that said, I recommend the book to you.

For those interested in history and in Mark Twain, this is a great way to spend your time. Full of facts about Twain that are not commonly known. It finishes with readings of some of his works accompanied by insightful critiques of why the work was important. The narration is also splendid.

I forgot how good this book is. Read it again, for the first time.
Maybe it should be re-read every 5 years.

Get ready to be enlightened

Completely spellbinding from start to finish.
one of the greatest audiobooks I have in my library.
Do not hesitate to purchase it .

Great Book but I didn't get through it

I liked this book, and I really enjoyed listening to it but I have to say that in the end I didn't finish it.

All I can think of is that in the end I enjoyed his books (I read 5 of them) much more than I enjoyed this biography.

If you are really into the topic of Mark Twain then this is probably the book for you but to me it was not as entertaining as reading his novels.

Who knows, perhaps I will come back to it another time and finish it off - I did get 75% or so of the way through it.