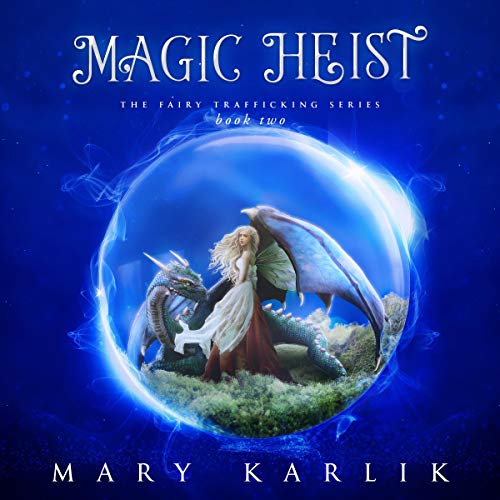 Layla rescued fairies that had been kidnapped and brought to the human world. But now they can’t find their way back to the magic realm, and time is running out.

Layla is a powerful fairy with magical ability that stretches beyond throwing spells. But with all that power, she still doesn’t know how to get over 100 fairies back to the magic realm. With their magic gone, the rescued fairies have no immunity to protect them from the toxins of the human world, and they’re slowly dying.

Layla hears a folklore about a silver wand that could restore the fairies' power. The trouble is she has to find it and steal it. To be successful, she knows she must team up with the one man who can make her insides quiver with an accidental brush of his fingertips. The same man who’s alter ego dragon is the natural predator of fairies. The man she knows will give his life to keep the fairies safe - Scotland’s finest specialist crime division leader, Ian Cameron.

Ian has been a dragon shifter for only a few days. He struggles to control the dragon spirit locked inside his human form, doesn’t know what magical powers he may or may not have, and has never been to a magical world. But none of those things frighten him as much as the little spark that ignites in his soul when the half-human fairy is around. But this little fairy is no Tinker Bell. She is brave, powerful, and can wield a sword like a medieval knight.

With growing feelings toward Layla, he couldn’t refuse to help her steal the wand if he wanted to. The problem is the dragon who lives inside him would like nothing more than to feed his appetite with all of those little fairies, especially the half human one who killed its leader.

I had trouble getting into this one. At first, I thought it was because I’m just getting into the PNR genre. Then I figured out that this is book 2 in a series and picks up after book one. What’s one to do? I kept listening. By the time I was halfway through, I finally had somethings figured out. There is no sex is this book, so it would be suitable for older teens.

excellent follow up to book 1, really enjoy the characters! narration continues to be excellent
#audiobookobsessionreviewer

Just as good as the first book

I am so in love with this series! Magic Heist is just as good as the first book. New characters to love and to hate. Layla and her gang are back Trying to save even more fairies. Can’t wait for book 3. As with the first book Ruth did an amazing job with the narration. She moves so easily between characters and has a perfect distinction between them

This was a brilliant second installment in this series. I fell more in love with the characters and their adventure than before. The interactions between the characters were superbly written and totally believable even though is fantastic lol. It's a fast paced story with plenty of action and loads of characters to drag you into their world.
Amazing storytelling!
The narration is probably the best I've come across. After listening to her for a while I found I could still hear the accents after I stopped.
SUPERB NARRATION SKILLS

This was a fantastic sequel to Magic Harvest. I really liked how the story picked right up after the first book. Events were still going and the plot was perfectly paced. I was eager through the series to find out what was going to happen next. The only issue I had with this book was kind of the same in the first one. While they obviously had problems to overcome, I felt like it was almost too easy because conveniently the people they needed were family members. It never seemed more like a bare minimum challenge.

As the story went on the character development was good as well. It was almost what I was expecting it to be but I really did enjoy it. Even though some problems seemed to be remedied easily, it was definitely interesting to read how the characters handled it.

NARRATION:
I'm so glad they kept the same narrators. She absolutely kills the narration of this stort and really brings it to life. Her accent is perfect because it really does put you in the place without it being difficult to understand.

I liked it more than the first book! Fab narration

They way Ruth Urquhart narrates this is so beautiful. She handles all the accents so well and it's easy to tell who is who and they carried on really well from the first book.

Is it odd that I liked this book more than the first? I'm not sure if it's being more comfortable with the characters and their world or whether I just liked the actual story more. I loved the way it carries on from the first book, the overarching storyline interspersed with smaller storylines. It made me chuckle in quite a few places and I like where it ended up.

It keeps getting better!

This series has totally sucked me in! I think book was even better than the first. So many little twists and turns. So much adventure. Plus the sweet romance between the two main characters. It all adds up to a great storyline that keeps you coming back for more.

Ruth it absolutely delightful in her narration of this series. She really brings the story and the characters to look life. I can't wait for more!

Magic Heist by Mary Karlik is the second book in the Fairy Trafficking Series that I listened to on audio narrated by Ruth Urquhart.

This is the second book of Mary’s that I have read and it definitely won’t be my last. The story was a very enjoyable young adult fantasy. I love Layla and Ian’s sweet romance. The book does end on a cliffhanger.

Ruth did an amazing job narrating. I absolutely loved her accent for this book. I felt like it brought authenticity to the fairy world.

Following straight on from book 1 was a nice touch. The story Just continues in Mary Karliks unique, imaginative way. Though fantasy it is almost plausible and the underlying issues weaved within are subtle and well done. Ruth Urquharts melodic tones bring such characterisation its applaudable. Definately a great marry of Author and narrator!
I loved it and await book 3 for more adventures.

While this book wasn't exactly as wonderful as the first book in my opinion, it was still very wonderful. Also, if I'm being honest, both books were very cheesy. I think that's what makes them both charming to me. I also have to give the author points for creativity and uniqueness. She managed to make very popular topics shine in a brand new light. It's like she made the impossible seem possible. I can't wait to continue this series. Especially with the way it ended. The characters area all great, but I can't lie. Sometimes I got a little overwhelmed and confused with all the characters. I adore Layla, but there are times she kind of gets on my nerves a bit. I adore Ian as well. He could be a book boyfriend, but there are times he just lacks the flair I need and want in a book boyfriend. He's still amazing though. I have no complaints where the narrator is concerned. Her name is Ruth Urquhart. I am pretty sure she did the first book as well, but I'm not a hundred percent. I'd be curious to try other books she has narrated quite frankly. I'd love to know if the accent in the book is her real accent. It's so adorable! This has been a great journey that I'm excited to continue on to see where it heads. While this may not be one of my favorite book/series of all times, I have enjoyed it quite a bit. I've enjoyed seeing familiar things in a new light. It's been quite enlightening and enjoyable. I'm glad I was introduced to these books.

This book starts exactly where the first book ends and the story continues to save faeries from death and slavery. There is so much more you learn in this story and more twists to keep you on the edge of your seat. I can’t wait for more in this series and hope it will be out soon.