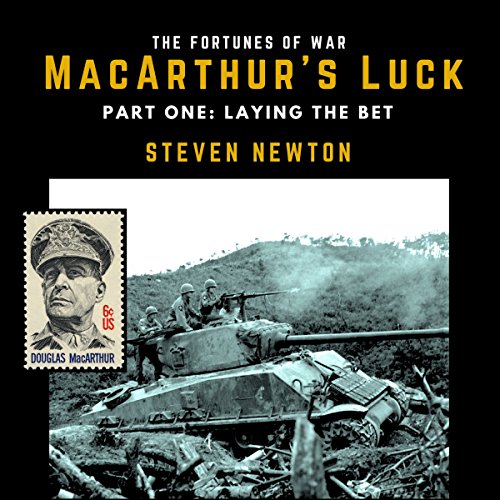 A globe-spanning novel of alternate history in the final days of World War II.

When MacArthur relieves General Dwight D. Eisenhower from command in Europe, the Anglo-Allied advance devolves into a free-for-all as competing armies race for Berlin, and the changes echo across the globe.

Populated by a cast of realistic characters who will take you inside the American, German, Soviet, and Japanese military machines, and meticulously researched by a well-known military historian, MacArthur's Luck opens The Fortunes of War series, exploring a world both tantalizingly like our own, but also dramatically different.

Half the fun is figuring out what's real, and what's not.

An interesting alternate history with fascinating yet small changes that enhance the outlook of the whole . I’m looking forward to The next audiobook .

Striking and very well worth it

yes. The recording just captured me. It was hypnotic at times. I kept looking forward to see how each character would resolve. Game of Thrones did that to me also. You really want to know what is going to happen to these people. The fact that just one writer created all this was quite surprising.

What other book might you compare MacArthur's Luck, Part One: Laying the Bet to and why?

I hadn't heard him before . Striking voice and all sorts of real characters.

Steven Newton is obviously very skilled at his craft. When is the next book coming out? The one that closes out this story? I want to know what the hell is going to happen to these people.

I read the story before I heard the audible version of it. I'm glad I did both. The story is compelling and the narrator does a excellent job of giving distinct voices to the various characters in the story. What I especially appreciated about the narrator is how his voice sounds like the time period during which the story occurs. If you listen to the story, you might find reading it also interesting (or vice versa). This story is as good as alternate histories get. I highly recommend it.

What made the experience of listening to MacArthur's Luck, Part One: Laying the Bet the most enjoyable?

To be clear, I was asked to review this for the publication I write for but was unfamiliar with the writer or the narrator. Well... the man reading it was one of a kind. Very special talent. Large variety of voices but true and real The writer was detailed about the history of the period and penned some very,very interesting and sympathetic characters, this whole moment in history is absolutely dramatic and riveting I have studied it and thought this was a very original and striking way to appreciate it

Actually some might disagree but I liked MacArthur in this. In history we are given an unreal depiction of him. Here the writer seems to expose all sides of him, makes him human but flawed but also grand and the kind of man we needed at the time to lead.

This man finds humor in the strangest situations. You feel what he reads and you see it. And its a remarkable voice.

Who was the most memorable character of MacArthur's Luck, Part One: Laying the Bet and why?

I don't think there was just one. There were so many. It was rather amazing. Dmitri the Russian fighter was sweet and sad, Konev was harsh but funny, one of the German officers was very,very poignant, another was a brutal pig,- the Americans were all portrayed realistically and written with flair

I'd buy this one just to listen a second and third time. It's that good., a diamond in the rough

Would you listen to MacArthur's Luck, Part One: Laying the Bet again? Why?

I'm not even finished yet, just started listening 5 hours ago but you better believe it. I listen to a lot of these and many of them are turkeys and gobblers. This one's for real.

the Russian, Konev. Bad ass. If we ever tangle with the Russians people should listen to this guy first.

Mr Thaler is nothing short of brilliant. I love Peter Coyote and Joe Barrett and maybe a very few others. Thaler is right up there with them.

I don't write these much but I'm pretty stoked about this one. S. Newton knows his craft. You can tell he's Military. You can just tell. He has discipline, he tells a fine story, specially if you know any history, he side tracks himself at times but that's not a big deal. He's pushing his cards into the center of the table and I respect that. He writes to win.

Would you listen to MacArthur's Luck, Part One: Laying the Bet again? Why?
I listened to it again now and I'm upset - where is the second book!!!

Yes, I would/will listen again. Mainly because I'm new to audible and it requires more attention than I anticipated to catch all the details. I enjoyed the story and know I'll enjoy it again (not right away though) because there will be details I missed the first time.


Who was your favorite character and why?
Col. Neames (sp?). I like his attitude and desire to help while also trying to cover his own ass.

What about Robert Thaler’s performance did you like?
I like the voices he brought to the characters. Clear and easily understood. That is important to me because I don't want to blast the volume, but I do have some hearing loss and the clear diction is vital to my enjoyment.

Any additional comments?
Buy it!

What made the experience of listening to MacArthur's Luck, Part One: Laying the Bet the most enjoyable?

The author really went for it. That means he scores and at times he spreads things out a bit. There are a lot of interesting characters and the narrator really helps with this. I loved the storyline that runs on the Russian front. You get a great glimpse of how Stalin manipulated his generals, and also how funny that could be at times. In the same way the writer does a good job granting sympathy to some of the average German soldiers and officers. This way you feel at times like your right there in the action feeling what they must have felt and seeing things from their perspective.

What was one of the most memorable moments of MacArthur's Luck, Part One: Laying the Bet?

German hospital scenes were poignant. Guederian negotiating with Hitler. Dmitri the Russian kid who becomes a tank commander. There were many scenes in this book that are worthy and that humanize the experience

Which character – as performed by Robert Thaler – was your favorite?

Guederian or Wenck or maybe the Russian, Konev. And I got to say I really liked Marjorie, she had some brass ones and was up front, a practical girl caught up in the War.

If you could rename MacArthur's Luck, Part One: Laying the Bet, what would you call it?

good question because my main criticism of the book was the title. I don't find it that accurate.

Like I said, MacArthur is really not the center of this book. He's there and the writer portrays him as a bit pompous but this makes him funny at times too. But the story really is about all the other characters around MacArthur and Hitler and Stalin, at least so far. I look forward to the next book that finishes this tale, i listened to this one in a very short space of time, i guess because i was very entertained. Writer was imaginative and narrator is helluva an actor.

Yes there is. I would make General MacArthur a major character in this book. He is not. MacArthur is given a few brief cameo appearances and then fades into the background as the various story lines revolving around sundry other characters unfold.

I bought this book, based upon the title, believing that it would be a book about General MacArthur. So far, it is not. Perhaps in the subsequent volumes in the series he will play a more prominent role; but he is all but absent in this volume.

Was MacArthur's Luck, Part One: Laying the Bet worth the listening time?

This is a good war novel, nicely performed by Robert Thaler, and worth listening to. My only real complaint is that General MacArthur was given such a de minimis role in the book.