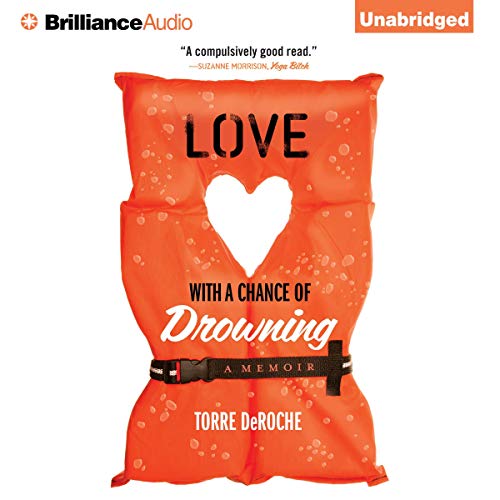 "A funny, irresistibly offbeat tale about the risks and rewards of living, and loving, with an open heart." ( Kirkus Reviews)

City girl Torre DeRoche isn’t looking for love, but a chance encounter in a San Francisco bar sparks an instant connection with a soulful Argentinean man who unexpectedly sweeps her off her feet. The problem? He’s just about to cast the dock lines and voyage around the world on his small sailboat, and Torre is terrified of deep water. However, lovesick Torre determines that to keep the man of her dreams, she must embark on the voyage of her nightmares, so she waves good-bye to dry land and braces for a life-changing journey that’s as exhilarating as it is terrifying.

This sometimes hilarious, often harrowing, and always poignant memoir is set against a backdrop of the world’s most beautiful and remote destinations. Equal parts love story and travel memoir, Love with a Chance of Drowning is witty, charming, and proof positive that there are some risks worth taking.

Love with a Chance of Drowningに寄せられたリスナーの声

True Adventure and Romance--I Loved It!!

This true memoir audiobook was extraordinarily fun for me. Audible does a great job of describing it. My description is more brief. Young Australian female travels to San Francisco to live for a year after promising her family she will not fall for an American and stay in the US. Instead she falls for an Argentinian who is determined to sail the world in his old but refurbished sail boat. Does she choose to go with him? You bet and there would be no story if she didn't go. Is she afraid of deep water? You bet. (But not as scared of it as I am!)

This is a very entertaining story, just perfect for armchair adventurers like me. No scares, no risking my life, no constipation, just relaxing in the house and listening to someone else's wonderful, scary, funny, one of a kind experiences. It is not just fluffy romance. There is a great deal about the workings of a sailboat, family dynamics, meeting interesting people, finding food, South Pacific islalnds/islanders, and making a relationship work when you have not a square foot of privacy and nowhere to go during a spat. Think 24/7 for months at a time. I wonder how many of us have someone we could imagine spending that much time with?

I found the story to get better and funnier as it went on and now that it is done, I wonder, what can I listen to next? Everything else seems so dry, dull, and boring. (Really, I want to listen to it again. Not sure . . . .)

I loved this book! As I'm thinking about taking up sailing I decided to do a search for good books on sailing. What I loved about the description on this book was that unlike all the others Torre was not keen on the idea at all. As someone who is also being told by her partner how great sailing is I was ecstatic to find a book written by someone who was coming at the whole adventure from my viewpoint: sailing is scary and so is the ocean!

The book is laugh out loud funny while at the same time giving an honest account of both the highs and lows of travel, sailing and doing so with your partner.

I can only highly recommend this book for anyone interested in sailing or long term adventure with your partner! (Be that of the armchair or actual variety!)

A great story, which is brought to live by the narrator. A fast read, you can’t wait to find out what happens next. Highly recommend.

This is literally one of my favorite books I've ever listened to... The story, the humanity, The adventure... And just an absolutely perfect performance. It's a story that I wish I had lived but through her book I got to live it. The love is absolutely perfect here, and the ocean is even more... Thank you for this ! I'll relisten to it every year, I'm sure. :-))

Basically repeats all the things the girl does as an inadequate sailor and is chasing some guy around the world. I would not recommend.

Humor and Humility on the High Sea

Love With a Chance of Drowning is the story of how Torre DeRoche’s plan to spend a year away from her native Australia took a big long detour. She met a man from Argentina, fell in love, and then (as of course makes sense when you’ve just started a new relationship) joined him on a 32-foot boat for a sailing adventure from California to the remote islands of Oceania.

DeRoche uses a sense of humor and humility to weave the details of the ups and downs of new love, sometimes harrowing adventures of life on the sea, and joys of exploring remote destinations into a funny and heartwarming memoir where the reader also learns a thing or two about life on a boat.

Although the main setting for the book is their boat, Amazing Grace, there are some great descriptions of some of the small islands they visit--you will definitely wish you were on a beach with a bowl of tropical fruit as you read about their destinations.

The author does not read the book herself for the audio version, but the narrator does an excellent job of conveying emotion with humor and keeping listeners engaged.

If you’re considering a long-term sailing trip, going on an extended adventure with a new love, want to explore remote destinations, or if you enjoy thoughtful funny memoirs, you’ll enjoy Love With a Chance of Drowning.

A romantic adventure for ocean lovers!

I loved this book! Coming from someone who has once had her own South American romance and who loves the ocean it was a perfect fit! It hooked me with its optimism and youthful approach to adventure. I appreciated how the protagonist is portrayed as someone who is fearful of the ocean and full of worry, then you watch her grow and gain experience and courage. Even through the sailing challenges and the absolute stupidity and stubbornness of Ivan at times, it made me appreciate the strength you gain traveling abroad with a loved one. It’s an easy, light, entertaining listen that’ll have you longing to be with them sailing the South Pacific!

As a sailor, this book was painful. I felt so bad for the author, sucked into sailing with someone so clueless and dangerous. I hope it doesn't dissuade others from the sea.

Captures the spirit of life at sea, the stubborness of fools and the sacrafices made for the sake of love. The narration was emotional and perfect for the difficulty of embodying a trip across the world.

What a great memoir!

What made the experience of listening to Love with a Chance of Drowning the most enjoyable?

The narration was absolutely fantastic.

I was actually really disappointed when I learned (about halfway through listening to this book) that the narrator was not the author herself. I looked up DeRoche and had been imagining her telling me the story the whole time. After that moment it felt like a lie, but the story was fantastic, as was the narration, so I got over it.

Exhilarating and yet comforting

Didn't want 'Love with a chance of drowning' to end as I was enjoying it so much. The perfect combination of exciting yet calming and lovable. Definitely recommend giving this a read!

Every bit as good as the first time.

Every bit as good as the first time I read this book a few years ago.
I’m still longing for an adventure of a lifetime, guess I’m just waiting to meet “my” Ivan, but when I do I’ll remember Torre’s worts and all descriptions and do it anyway.
A really lovely book with just enough technicality and disasters to make you realise the risks involved and just enough gloss to make you start planning !
A well written lighthearted mix, definitely worth 5 stars from me. Thank you Torre.