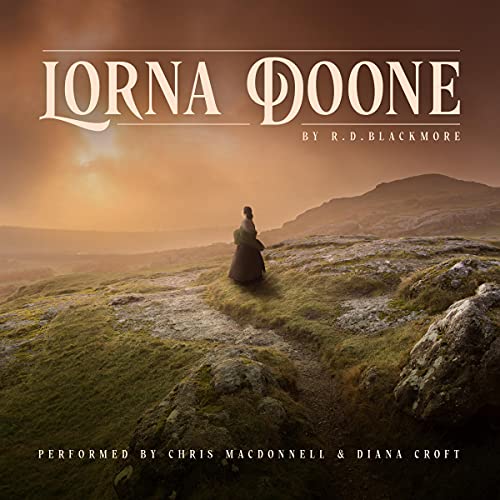 R. D. Blackmore’s enduring masterpiece Lorna Doone: A Romance of Exmoor is renowned for its beautifully descriptive writing, the cleverly woven plot, and the powerfully drawn portrait of true love. Set in Devon in the late 17th century, it is an enduring masterpiece. First published in 1869, the novel revolves around the story of Devonshire farmer, John Ridd, his family, friends, and community. John tells the story in the first person beginning when he is just a boy and his father is murdered by the Doones.

Formerly a noble family from the north of England, the Doones have been forced by circumstances to leave their traditional home and live as outlaws on the Devon/Somerset border where they tyrannize, bully and rob the local population.

John’s curiosity and adventurous nature lead him secretly into the isolated and closely guarded Valley of the Doones, where he meets the beautiful Lorna. Abducted from her mother as an infant some years before, she is held by the outlaws whose interest in her is purely selfish. Over time and through secret meetings, John and Lorna develop a relationship that blossoms into deep love - a love that forces John to rescue his beloved from the hateful Doones who are trying to starve Lorna into submission to their wishes.

The novel incorporates real events, places, and characters such as the Great Winter, the Duke of Monmouth, Judge Jeffries, Shakespeare (who is said to be an inspiration for the plot), highwaymen, battles, smugglers, King Charles II, and his queen.

Blackmore went to Blundells School in Tiverton, which is where the novel opens and introduces the young John Ridd. Another inspiration for the plot is the actual shooting of a young woman at a church in Chagford, Devon.

Great accent, classic story.
Lengthy, but worth the investment in time.
May return toot someday.

A Classic Brought To Life

If you're reading just the book, the story can seem a little daunting. However, when I added the wonderful narration by Chris McDonnell and Diana Croft, this classic was brought to life with beautiful imagery. I enjoyed reading and listening to this tale.