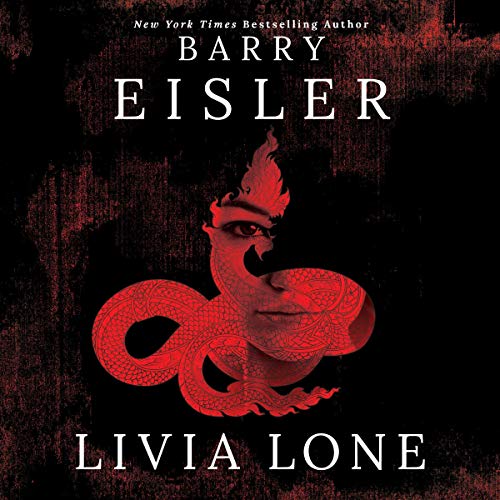 "Author Barry Eisler narrates his own work with the skill of a professional voice actor.... He never strains credulity as Livia transitions from child victim to confident woman and avenging angel for the abused. Livia's male abusers - especially her stepfather - practically hiss with vileness, like coiled snakes. When young Livia learns jujutsu and starts fighting back, listeners will share her visceral catharsis and newfound empowerment." (AudioFile)

Seattle PD sex-crimes detective Livia Lone knows the monsters she hunts. Sold by her Thai parents along with her little sister, Nason; abused by the men who trafficked them; marooned in America...the only thing that kept Livia alive as a teenager was her determination to find Nason.

Livia has never stopped looking. And she copes with her failure to protect her sister by doing everything she can to put predators in prison.

Or, when that fails, by putting them in the ground.

But when a fresh lead offers new hope of finding Nason and the men who trafficked them both, Livia will have to go beyond just being a cop. Beyond even being a vigilante. She’ll have to relive the horrors of the past. Take on one of the most powerful men in the US government. And uncover a conspiracy of almost unimaginable evil.

In every way, it’s an unfair fight. But Livia has two advantages: her unending love for Nason -

And a lifelong lust for vengeance.

This is a heartbreaker that makes u want 2 hit someone!

This is another really Excellent book from Barry Eisler. Although I would really like more of the John Rain series, his last book (Gods Eye View) and this one really demonstrate his writing as well as his narrating abilities.
This is a very dark story involving human trafficking and the sex industry. There were scenes that were somewhat difficult to listen to, however this story is a work of fiction. I realize that there are people that just do not want to listen to books like this but I also think it is very important not to bury our heads in the sand and think that will make this awful side of (in)humanity go away.
I agree with Audible listener Wayne in saying this book has my most HIGHEST RECOMMENDATION.
If you found this review helpful please indicate so.
Thank You.

WOW! What a story. Great Narration too!

Wow this was some story. So many emotions, hate, revenge, disgust, sad, satisfaction, justice. Livia Lone was a determined, strong and compelling character for sure!

The story line and plot was great. You lived through this girl's life back and forth from THEN and NOW. I liked the way you got the history from the past to the present like that. You really got to know the Livia and what made her. I was also quite surprised at the end. Which is good because usually I can figure things out.

I highly recommend this book if you are not queasy listener it does contain some scenes that some readers/listeners wouldn't like. Some I didn't care for but for as brutal as some of this was it was very well written.

As for the narrator. He was the author of the book and did a fantastic job. He read with emotion and did a good job on the female voice.
Thank you for such a riveting story Mr. Eisler.

One of the best revenge novels out there

I love revenge stories. This is one of the best out there with a satisfying ending that ties everything together. Having read Eisler's Rain novels, I already knew he was an author I liked. But Livia Lone is even better.
His use of forensics, psychology, fire arms expertise, martial arts is masterful. It all rolls along as part of the story, not clunky sermons for tech geeks.
I am now downloading his latest novel and am eager to see how he brings all of his series together. If you aren't aware of Eisler yet, you now have a bunch of great options to download for a while.

I could not finish it

May be it's just me, but I tried to get through 21 chapters and just cannot continue with all the child sexual assault.

The narrator is perfect for this because he is just "creepy" sounding in all voices.

I just couldn't do it.

This book was a masterpiece, but if you are a surviving rape victim, I would skip this one.

Livia is a wonderful character, and it is nail-bitingly satisfying to see her get revenge on all of those who harmed her as a child. The plot and premise were believable and heartbreaking. Personally, I loved this book. As a rape survivor myself, I enjoyed watching her get her revenge... but I can’t pretend it was easy listening to Livia and Nassan be abused. I’m just glad there was a satisfactory end to it all.

The basic story was good but the graphic rape descriptions were stomach turning. I understand that was probably the point to show how discussing it is but still I thought it was to much. It took away the joy I normally have with a book. I just felt sick.

A difficult listen, but a must listen novel

Livia Lone is a dark and painful novel. Its topic is from the most depraved portions of humanity. The topic of this novel is sexual abuse and sex trafficking of preteen and early teen girls. It is also a story of retribution, righteous retribution. Livia Lone is a beautifully written and narrated audiobook about painful situations. It is not like Eisler's John Rain series or even similar to The God's Eye View (Eisler's prior book). As has now become the norm Barry Eisler narrates his own audiobooks. He is a very dependable 5 star narrator. Livia Lone has my HIGHEST POSSIBLE RECOMMENDATION.

Whoa.. Where Did That Come From? Awesome!

Barry Eisler- where have you been all my life?

'Livia Lone' is my first Eisler novel and I bought it due to all of the positive reviews. I became enthralled with Livia, grown vigilante cop and a child who was sold by her parents into the corrupt human trafficking world of Thailand. After a long boat ride she ends up in the United States and she is adopted- and must learn to protect herself against all people who intend to harm her. Unfortunately, there are many in her path.

Awesome character, amazing character development- I hung on every word and morally cheered for Livia. She's a tough butt-kicking no-nonsense broad who has had to be tough to survive, and I loved every minute of her story.

in the end, the bad guys did win

This is another one of those scenarios where I just cannot fathom how so many have given this book good ratings. As another reviewer mentioned, human trafficking has been addressed SO much better in many other books, notably several by European authors. This one is disgustingly and unnecessarily graphic in its depictions of rape - it kind of makes you feel like your brain is being raped. The revenge taken is completely ridiculous and unbelievable, but the path that gets you there is so utterly improbable that you expect nothing less. Saddest of all, the bad guys do win in this tragic waste of my time, because they own Livia, motivating every thought, every move, every relationship, every sad, empty act of violence the main character perpetrates.
In the end, I didn't give a rat's *#@ about what happened to anyone in this overly violent, totally unrealistic and, frankly, insulting book.
I won't be giving Eisler another chance, because I feel like he would have to ask forgiveness for this piece of crap first.

This is a truly moving book. If the subject matter of human trafficking is upsetting to you, this is not for you. I cried at many places in this book. Livia Lone and her little sister, Nason, life is irrevocably changed because of the poverty in Thailand and the hopelessness of its people.

This is human trafficking at its’ worst. Livia and Nason are separate and Livia life is the desperate need to find her sister and the guilt that it is her fault they were separated. Why is it that once you become a victim, you are constricted to be powerless for the rest of your life?

Livia fights the bonds of victimology. She finds her strength and self-esteem in her athleticism. She acquires the means to find her sister; she becomes a cop. She is a cop by day and a vigilante at night.This is a poignant story of a young girl must accept degradation, to keep Nason safe and hope for information to be reunited with her.

The twist and turns are engrossing. When luxury and privilege are added to Livia’s, why is she not happy? What holds her to the past? What is luxury when you are still expected to endure the life of sexual abuse?

This story presents a picture of how human traffic is enabled in our society and of the many helpless people (children, youth, and adults) who are forced to satisfy the need of the depraved abusers.

Normally, I do not like an author as a narrator. Many do not have the range of voices. Barry Eisler does an excellent job. I never read one of his books before. I am trying another one of his books.

Not a pleasant subject to be dealt with but handled without glorification . The story moves at a great pace from the start with no side filling to fill out the tale. Looking forward to book two of this series .

Congratulations to the author for his narration. Very dark, emotional story. This is the first book that I have listened to by this author. It won't be the last.

One of the best books I've heard for ages. Loved everything about this story. Very grim in parts but I just had to keep listening. Highly recommended

Another great one from Eisler

Would you listen to Livia Lone again? Why?

I would read the book again, rather than listen

What other book might you compare Livia Lone to, and why?

If you've read Eisler's other books, you know the well crafted, fast paced, sexy, gritty works they are

What aspect of Barry Eisler’s performance might you have changed?

Barry is a terrific author and a great guy. What he isn't, however, is an actor. Although his performance is quite good, I'd rather see his books read by Jeff Harding, who read some of the earlier Rain books

Excellent narration brought this story to life. Thought provoking topic, a black mirror on our species's.

Absolutely loved this, I was unsure before I started it not being a Rain novel, but I was quickly hooked and can't wait to start the next

Brilliant author and narrator - stepping up his writing to tackle big social issues. The action is still fantastic though!