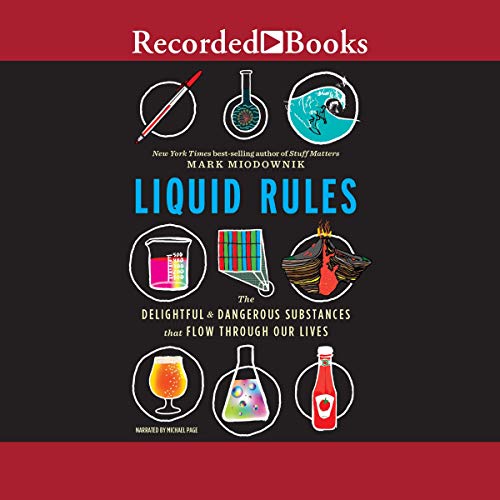 We all know that without water we couldn't survive, and that sometimes a cup of coffee or a glass of wine feels just as vital. But do we really understand how much we rely on liquids, or the destructive power they hold? Set over the course of a flight from London to San Francisco, Liquid Rules offers listeners a fascinating tour of these formless substances, told through the language of molecules, droplets, heartbeats, and ocean waves. Throughout the trip, we encounter fluids within the plane - from a seemingly ordinary cup of tea to a liquid crystal display screen - and without, in the volcanoes of Iceland, the frozen expanse of Greenland, and the marvelous California coastline. We come to see liquids as substances of wonder and fascination, and to understand their potential for death and destruction. Just as in Stuff Matters, Mark Miodownik's unique brand of scientific storytelling brings liquids and their mysterious properties to life in a captivating new way.

Rather than write a normal review I'm going to comment in list format. 1. I like LIQUID RULES more than Stuff Matters the author's primary book. Both are excellent. 2. The author's references to chemical formulas is a possible negative for many listeners. 3. This book is written about the author's thoughts/actions as he flies from London to San Francisco. 4. I feel sorry for Susan who was the author's row mate on his long flight. He was obnoxious! 5. The author's dry humor makes LIQUID RULES more interesting. 6. Micheal Page's narration is fabulous.

An eye-opening, mind-bending look at liquids. This book defies simple definition. It is history, encompassing eons, science lessons, global consciousness and science fiction losing its fiction status. All this and more, achieved by close analysis of everyday ( and a few not so everyday) liquids. Fascinating. An incentive to read more science. The narrator is delightful, too!

Miodownik's last book was good, this one is great

This book is not boring. It is a pleasant way to better understand the world, in particular the liquid substances around us. Mark introduces us to jet fuel, snot, saliva, and CFCs in a single corky narrative. Mark's academic background makes him an authority on these matters, but I wish he spent more time and went more in-depth on the substances he discussed: each could have its own book. But the overviews in this book are worth the listen.

I was delighted when I saw Miodownik was coming out with another book. Having enjoyed his "Stuff Matters", I acquired "Liquid Rules" and was not disappointed. Framed by the narrative device of observing liquids around him while flying from Britain to California, Miodownik describes oceans, glaciers, clouds, wine, saliva, droplets in the pressurized cabin, tea, coffee, blood... to name a few. I learned so much! As a result, I found myself not just noticing all the liquids I encounter in my life, but also contemplating what properties they have in relation to one another. This included pondering the process of converting my bar of solid soap into a liquid substance by interacting it with water, another liquid. Miodownik's section on hand soap vs. liquid soap (and his preference for the former) was thus especially interesting. My only quibble with this work was its lack of acknowledging its own limitations. The subtitle implies that "dangerous" liquids would also be discussed, but--with the exception of mercury--the diversity of naturally occurring toxins and poisons are not mentioned. Of course it is unrealistic to expect such a short work to touch upon everything, but I wish there was more of a "there's so much more to learn and discuss" preface and/or conclusion. That being said, this was extremely eye opening, as "Stuff Matters" was, and I will be recommending it to many. This is a great way to inspire a natural curiosity for the natural observation of fluid dynamics. I can even see myself re-reading it again!

At first, I contemplated returning this. I am SO GLAD I did not! With further delving into the information given, it got better, and better, and absolutely better! Possibly one of the best I have ever acquired! I found that a chapter at a time was the best way to absorb the true plethora of information. Listen to a bit, or a chapter, then stop and go about life, letting it sink in and become pertinent. All the applications are appropriate to our modern life, which is unusual; as new applications come about, this book will become passé. Please, sir: Write another book like this when this becomes old news!! The narrator is superb... and becomes the embodiment of the facts presented! His voice and accent rounded out my life quite well for a period of time... and ushered me into sleep as well. My compliments! The author gets major props for making very, very complex subject matter quite accessible. In short: EVERYONE who uses any liquid should dip into this !

I picked this book because I love learning about science where I know nothing. I wondered how a book on fluids could be made interesting. The answer (1) give the book a context, in this case the fluids involved in a transatlantic flight (2) have it read in an English accent. I'm a sucker for all manner of British accents. Everything just sounds so much more intellectual and/or comical sometimes simultaneously. Still I found the book overly detailed at times and yet shallow on subjects I thought deserved more. I enjoyed the coffee and tea discussions very entertaining and educational. Well worth a listen.

You want to learn something? Try this!

This book makes the complex simple and understandable. I never realized how little I knew about liquids.

I loved "Stuff Matters" and was delighted to see that there's a sequel. Liquid Rules has all the strengths of Stuff Matters: wit, focused bite sized chapters, science, interesting history, and perfect narration. For anyone who enjoyed either Stuff Matters or Liquid Rules, you should definitely also check out the other. I can't help but wonder what his next theme will be.

The last chapter or so is about the fake technology of Theranos and it displayed that this lovely scientist was still taken in by the BS in an embarrassing way. Shows you can't take the other things he says seriously either. Which is unfortunate because it's a pretty fun read.

Book dripped in my brain.

Learned so much. Love the author reading and loved how the author conveyed the information through the use of a plane flight. Really great book. Really enjoyed it I highly recommend it!

I never pershsed the audio book by this narrator

I never pershsed the audio book by this narrator originally but for some reason when I re-downloaded the title it downloaded this more up to date one. it sounds rushed and sounded like a computed robot talking. had to download the original which is shorter bot much better narrated