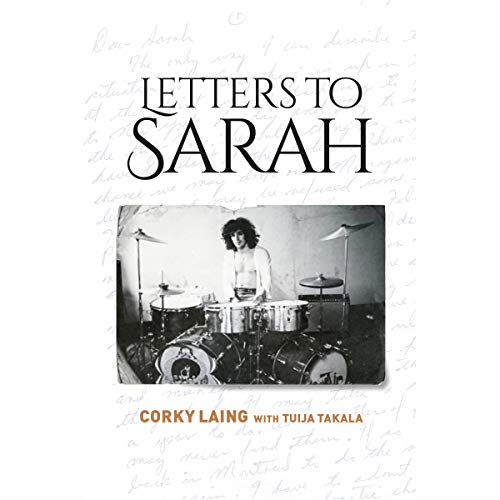 Letters to Sarah is a rock autobiography with a difference. In addition to the exceptionally honest and endearing voice of Corky chronicling the ups and downs of his life, there are excerpts from dozens of letters (out of the c. 200) that Corky wrote to his mother, Sarah, between the years 1963 and 1997. She had saved them all. The letters were a way for Corky, away on the road for years on end, to keep in touch with his roots and also, to make sense of his life. This continues in Letters to Sarah, as Corky relives the first 50 years of his life, up until his mother’s passing in 1998.

Laing is best known as the drummer of the legendary bands Mountain and West, Bruce & Laing and over the years, he has played, recorded, and written with the who’s-who of rock. Apart from a six-year period in the 90s, when he worked as VP of A&R at Polygram Canada, he has been performing and making music constantly since 1965. He has received multiple gold records, several Juno Awards, and was given the Bonzo Bash Legend Award in 2014.

Tuija Takala, PhD is a widely published academic author with over 70 international articles, and 16 books and edited collections to her name published by, among others, Cambridge University Press, Oxford University Press, Springer and Routledge. Since 2012, Tuija has been working closely with Corky as his manager and partner.

down to earth Rock and Roll memoir

great memoir of an often forgotten Rock pioneer from the Woodstock era. played with many of the greats. Very relatable storytelling, easy to finish this book quickly

Sincere and honest history and insights from a Rock & Roll icon

Corky Laing was there at the the inception of modern Rock & Roll. He gives an honest, insights accounting of the trials and tribulations of being a professional musician in a top tier Rock Band from the drug fueled 60's onward. Corky is an every man's Rock Star. He is down to earth, humble and thankful. His story is honest, vulnerable and devoid of the bluster and ego that sometimes seeps into the pages of other Rocker bios. He has stories of playing and hanging out with some of the most legendary Rockers in modern history. He also describes the tenuous and precarious nature of the Rock star life. There's not much stability and no guarantees of work or financial security. His letters to his mother are heartfelt, warm and gentle windows into the time, circumstances and mindset of the man and the times. Mountain was a musical powerhouse and Corky's drumming along with Felix Pappalardi on bass provided the platform for Lesley West to paint a picture with his magic guirar tone that gave us iconic songs that have stood the test of time. I highly recommend this self narrated rock history biography.