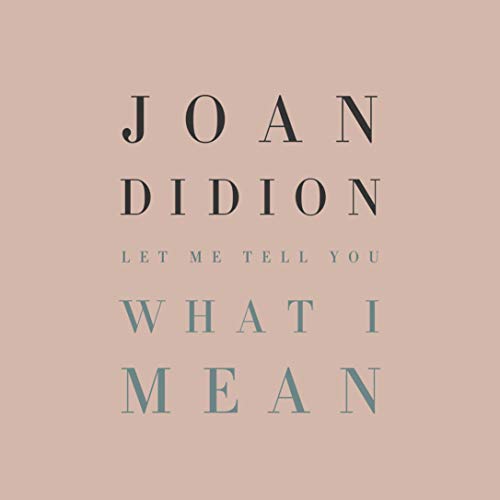 "Didion’s remarkable, five decades-long career as a journalist, essayist, novelist, and screen writer has earned her a prominent place in the American literary canon, and the 12 early pieces collected here underscore her singularity. Her musings - whether contemplating 'pretty' Nancy Reagan living out her 'middle-class American woman’s daydream circa 1948' or the power of Ernest Hemingway’s pen - are all unmistakably Didionesque. There will never be another quite like her." (O Magazine)

“There's plenty of journalistic gold in Let Me Tell You What I Mean.... What's particularly salient is her trademark farsightedness, which is especially striking decades later.... The relevance of her observations in today's fractured world of fringe media is uncannily prescient.” (Heller McAlpin, NPR)

“Back in 1968, Joan Didion identified a problem with the mainstream media.... Didion’s critique seems more prescient than ever.... [This collection] is sure to be of interest to Didion completists and fans of such cultural touchstones as Slouching Toward Bethlehem and The Year of Magical Thinking.... [These essays] make it clear why she has been an essential voice in American arts and letters for more than half a century.” (Ann Levin, Associated Press)

From one of our most iconic and influential writers: a timeless collection of mostly early pieces that reveal what would become Joan Didion's subjects, including the press, politics, California robber barons, women, and her own self-doubt.

A Most Anticipated Book of 2021 from Vogue, Time, Bustle, The New York Times, and many more.

These 12 pieces from 1968 to 2000, never before gathered together, offer an illuminating glimpse into the mind and process of a legendary figure. They showcase Joan Didion's incisive reporting, her empathetic gaze, and her role as "an articulate witness to the most stubborn and intractable truths of our time" (The New York Times Book Review).

Here, Didion touches on topics ranging from newspapers ("the problem is not so much whether one trusts the news as to whether one finds it"), to the fantasy of San Simeon, to not getting into Stanford. In "Why I Write", Didion ponders the act of writing: "I write entirely to find out what I'm thinking, what I'm looking at, what I see and what it means." From her admiration for Hemingway's sentences to her acknowledgment that Martha Stewart's story is one "that has historically encouraged women in this country, even as it has threatened men", these essays are acutely and brilliantly observed. Each piece is classic Didion: incisive, bemused, and stunningly prescient.

Let Me Tell You What I Meanに寄せられたリスナーの声

I adore Joan Didion and have read all of her work. It’s wonderful to have these previously uncollected pieces. But this narrator doesn’t do her justice. She sounds too chirpy and unserious — the opposite of Joan Didion. I’ve listened to other books she’s narrated and will avoid them in the future. Also, I have to wonder why Didion included the last essay, about Martha Stewart, as it predates her downfall for insider trader. It sounds strangely incomplete, and it’s odd to hear Didion defend someone who, in the end, does not deserve it.

SUCH A FUN LISTEN

The author’s words were so much enhanced by the narrator I would love more of both.

There is nothing new here. Same old hackneyed view of the 1960s. Boring. Not worth the time,

Hilton Als’ foreword alone is worth the price

Hilton Als’ foreword, an essay really, is outstanding. The stories in the book are okay but not Didion’s best work. Unfortunately the narrator is hopelessly miscast, reading “with expression” like a 2nd grade teacher at storytime, absolutely not Didion’s dry, sophisticated style.

My thoughts on “Let Me Tell You What I Mean”

Joan Didion and I, also a 5th generation Californian, grew up in the same environment, the Sacramento Valley, and share the same history. I read everything she writes and am, constantly amazed, at the ideas we share. My favorite will always be “Run River” which so perfectly captures this area I love. Nan Cook

Listening to this book made me sad. The old pieces seemed so over, the references so likely to be mysterious to anyone under the age of 50. And the encomium to Martha Stewart , a brave attempt, felt embarrassing. I think it’s just time for Didion to hang up her quill.

Kimberly did a great job, however, her tone is off for Didion. Hilton Als did (and would continue to do) more justice to Joan in the introduction to the other works.