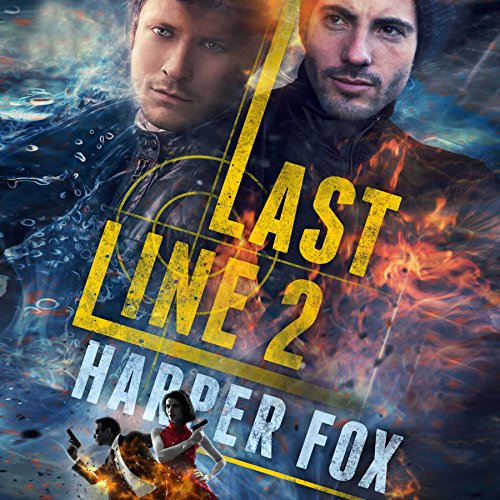 MI5 agents Marina Griffin and Leo South are made to be together. But their mission's-end encounter with Ashkeloi gypsies in the Russian forest reveals a terrifying prophecy - a fate that will tear them apart, and re-echo into the lives of their sons, John and Mike.

Thirty years later, a deadly climate shift has opened up a seaway through the Arctic, and nuclear war is imminent as the global superpowers make a grab for the oil reserves suddenly exposed. Like everyone else, Mike and John just want to ride out the storm and protect the people they love, especially their boy Quin. But love isn't enough when the stakes are this high, and Mike and John too are in the grip of a destiny they can't avoid. Summoned from their Glastonbury farmhouse to the office of their ex-boss, James Webb, they discover not only the truth about their heritage but the forces they will have to encounter if the war for the Arctic - and the future of humanity - is to be won.

Last Line 2: Ring Around the Sunに寄せられたリスナーの声

I like most of the author’s other books more than this one. It had lots of good reviews so I muddled through after a confusing, long winded prologue. There were some good moments of connection between Griffin & Michael that might make the read worth it for fans but it is not a standalone and ends on a cliffhanger, kind of. Well, maybe ends more at a sudden barrier. When a fatal car crash is the most romantic scene in a book that I think is supposed to be a romance, there are issues.

The magic was at least relevant in this installment. In a near complete reversal from book one, the magic dominated in book 2. The magic was overwhelming, but unreliable. It was very frustrating as a reader having to guess whether each scene was or wasn’t magical & why. I was annoyed, again, that Griffin & Michael split up for the main action sequence. The bad guys were so much better at using their powers, I wondered why they even bothered with our comparatively inept heroes. Beyond bothering, *Every* main bad guy went out of their way to go full Bond Villain in their exposition. This works as a Bond satire. If that wasn’t the intent, not so much. The characters became almost caricatures.

There were some continuity errors. The oddest: after making a point that the guys reserved their most energetic exertions for when Quinn is out of the house, they go full throttle when Quinn’s new girlfriend first stays over. An otherwise sexy scene left me full of tension about how breakfast was bound to be a nightmare of cringe. Apparently no one overheard? Then after the aforementioned car crash (it was only mostly fatal…), the guys basically forget Quinn exists which, under the circumstances, was carelessly rude.

While I want to enjoy plots with fortune telling, I rarely do. This was not an exception. The fortune telling was heavy handed, and I am still unsure what the motivation was beyond “magical minority”. That might not be as insulting as usual since most of these characters are magical, but again, given that they’re mostly caricatures, it kind of is. It doesn’t help that there’s a thru line about an amulet that doesn’t pay off in this installment. It’s carefully tended, which I normally appreciate, but much is made of the amulet when this story could exist fine without it, so instead I resent the attention I paid to a boring detail.

Fans of the author who are also completists might like this book. I recommend skimming the first parts if you do.

Steam: Med-high with kink & cheating.
There’s M/M kink on page. But as I mentioned, some of it was spoiled by the potential for a houseguest to overhear them. Also, there is cheating. I never quite figured out the rationale for it. It was addressed as a work duty/sacrifice yet I didn’t buy it. Just puzzling to me why that choice was made.

Narration: Was a combination of pretty good and confusing. The varied voices were ok, but occasionally applied to wrong characters. The Russian pronunciations were internally consistent but wrong. I again found myself confusing the main characters more than a couple times, which was both a prose & narration issue here.

Seriously, you really need to read the first book and then this one. Right now.

I don't know why, but the story lost my attention several times. nNot a bad book, just a weird one.

Such a good series.

This series was amazing. The imagination and story weaving was brilliant. My one and only complaint is that she didn’t complete the story with book 3.

I hope there is a third book! I love this story, very gripping and passionate!

Good, but leaves you wanting...

An explanation, more character development, and bad guys that made sense. This story deserved better.

the story is confusing and disjointed. really hard to listen too. I couldn't finish it.

though this wasn't advertised as paranormal it is. Not a fluff read, close attention required!

So much promise but didn’t end up delivering so don’t expect too much.

The reading and Vocal performance on this is Amazing , so well done!!!

As for the story/writing for me it really fell flat. There was so much build up, back story and character development that was decently done but it almost seemed like the author couldn’t or wouldn’t decide if she wanted to commit to the out there Sci-Fi aspect until the last few chapters that fully jumped the shark and hardly made any sense. Then to cut such an abrupt ending after expecting us to suspend all logic by trying to make those crazy jumps with her really left a bad taste in my mouth.
Feel free to give this sequel a shot yourself but best to keep expectations low throughout so you’re not left as disappointed as I was.

in every way. story, characters, narration, content, excitement, adventure and most of all a beautiful love story.