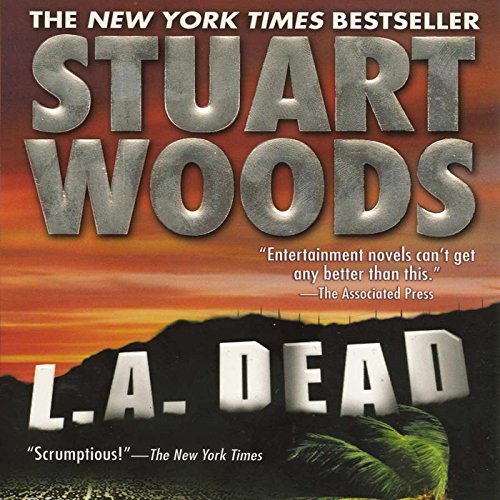 Cop turned lawyer and investigator Stone Barrington ventures out to the West Coast - and out on a limb - in this "stylish whodunit" (Detroit News) filled with romance and murder.

Stone's trip to Venice -with a fiery Mafia princess- is cut short by a frantic phone call from half a world away. A celebrity murder has Los Angeles in an uproar and has a former flame pining for Stone's help - in more ways than one....

Bored With Barrington - This One's Enough

Woods is recycling plots about ambiguous women ambiguously involved in thinly plotted murders. Additionally he's stuffing the page count with more and more repetitive sex that's merely decorative. Yeah Woods, who's otherwise a fine writer, has managed to make sweaty-bed-squirming boooooring. Given his laborious descriptions, well... if y'seen one... y'seen 'em all. Plus, I no longer care about these people. Barrington's a shallow cypher, and his ensemble cast, ain't growing either in number or depth.

Sooooo... This is probably the last Barrington buy for me. Probably? Well the plots have become so improbable that it will take at least a couple of years to unload the baggage of disbelief I just couldn't suspend to finish L.A. Dead.

Kept me heading to the next Chapter! Tony Roberts does a superb job of narrating. Great story line and character development.

Would you try another book from Stuart Woods and/or Tony Roberts?

I've read several Stuart Woods books, and they are usually pretty good. This one seems to be a little more shallow, and if Stone eats one more lobster salad I think I'll puke. Also, the gratuitous sex is a bit overwhelming in this one. I'm not a prude, but the man is engaged to one woman, in love with another and has sex with almost every other attractive female in the book. It's not an attractive characteristic, and makes any idea that he is of above-average intelligence ring completely false.

Would you be willing to try another book from Stuart Woods? Why or why not?

I will likely read more by Woods because I read "Chiefs" and others in the "Will Lee" series, and for the most part they are very good. Woods is no John Irving (Or even Lee Childs!) but he is capable of plotting a good yarn when he exerts himself.

Roberts makes Barrington's friend Dino sound just terrible. The nasal, grating tone he attributes to Dino is distracting and annoying. His voicing of Dulce Bianchi is ridiculous. This is an American girl, raised in Brooklyn and Manhattan. Would she really have an Italian accent?

Some of the characters in this book are likable, and I'm giving Woods the benefit of the doubt as I know he has good stuff in him. I'll likely try one more in the Barrington series, but if it doesn't get better than this I'm out.

I listened to a couple of the Woods books narrated by Richard Ferrone, and they were much better. So obviously the annoying and grating Roberts narration makes it much easier for me to find fault with the book.

Excellent to the end.

Great book with multiple characters that keeps you wondering to the end. Can't wait to read the next book in the series.

Superb storytelling. Love all the characters. Stuart Woods has done it again. If you haven't listened yet, you should! You start to feel like family

Stone seems to think or is lead by his penis, no matter whom is may hurt, as long as he can get his pleasure, I think Dolce got a raw deal the way the story has been written.

I don't see why this app requires 15 words to say Excellent, as always. That's why I rarely leave reviews.

loved this story. STONE gets into several scrapes and love interests. complicated but a real mystery. You think you know who did what, but surprise! it was someone else.

Fast-paced and great energy. Stone is becoming naïve beyond belief and Arington has become a bonafide airhead. While there are many enjoyable twists and turns it looks like Mr. Woods is going to bleed the Stone:Arington relationship issues for another 8-10 books or more. I've only read his first nine in this series. Great mind and great books, but would like to see one actually have a beginning and have an ending. Meanwhile, I'll keep reading forward until I can't take it anymore.

Great book. This book was good.

This is my favorite book. This was amazing. Great story. I am still hooked. Yes!