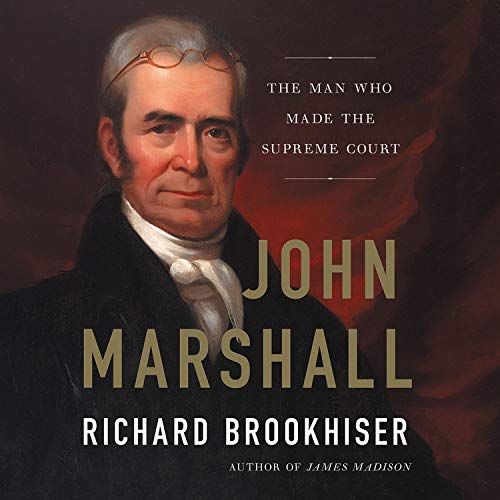 "Richard Brookhiser brings his deep knowledge of the American founding, his appreciation for history's crisscrossing patterns, and his signature minimalist style to America's greatest chief justice. His book is also timely. For John Marshall's seminal conviction was that we were a single people, and that government was not 'them' but 'us.'" (Joseph J. Ellis, author of American Dialogue: The Founders and Us)

"Brookhiser's John Marshall is an erudite and elegant tour through not only the great chief justice's life, but the beginnings of the United States and the nation's Supreme Court. With colorful portraits of members of the founding generation, and clear and insightful descriptions of the legal cases that that shaped the American legal system, this book is a welcome contribution to the scholarship on the Early American Republic." (Annette Gordon-Reed, coauthor of Most Blessed of the Patriarchs)

"Richard Brookhiser is a master of the interpretive biography, and his incisive portrait of John Marshall couldn't be more timely. The Supreme Court stands at the middle of the American political arena, and Marshall is the man who put it there." (H.W. Brands, author of Heirs of the Founders)

In 1801, a genial and brilliant Revolutionary War veteran and politician became the fourth chief justice of the US. He would hold the post for 34 years (still a record), expounding the Constitution he loved. Before he joined the Court, it was the weakling of the federal government, lacking in dignity and clout. After he died, it could never be ignored again.

Through three decades of dramatic cases involving businessmen, scoundrels, Native Americans, and slaves, Marshall defended the federal government against unruly states, established the Supreme Court's right to rebuke Congress or the president, and unleashed the power of American commerce. For better and for worse, he made the Supreme Court a pillar of American life.

In March 2018 I read Joel Richard Paul’s “Without Precedent Chief Justice John Marshall and His Time”. The book wet my appetite to learn more about John Marshall. When I saw this newly released biography of Marshall by Richard Brookhiser, I had to buy it.

John Marshall (1755-1835) was the fourth Chief Justice of the Supreme Court. The first was John Jay, then John Rutledge and then Oliver Ellsworth. None of these men served in the position long. Marshall was sworn in as Chief Justice in 1801 and died in 1835 in a stagecoach accident when travelling for the Court. Marshall laid down the principles of the law and policies of the Court. According to Brookhiser it was Marshall that brought dignity to the Court.

John Richard Paul’s book “Without Precedent” was longer and provided more information about Marshall’s personal life as well as more in-depth analysis of his various rulings. Brookhiser is more concise and covered primarily his working life and relationship with George Washington. Brookhiser’s book was a bit more entertaining. I think that Brookhiser’s biography is ideal for the lay reader. Richard Brookhiser is a journalist and biographer. I have read his biographies of Alexander Hamilton and George Washington.

The book is nine hours thirty-one minutes. Robert Fass does an excellent job narrating the book. Fass is a well-known narrator. He has been nominated for the Audie Award eight times and won it twice. He also has won many AudioFile Earphone Awards.


One of a Kind, When Needed the Most

It is easy to forget that, in the beginning, the United States was so small that it could be, and was, shaped forever by a handful of gifted minds. Marshall was one of these. He had a complete vision of what needed to happen to make the political philosophy of federalism, checks and balances and three separate and co-equal branches of government a reality. Brookhiser does a magnificent job portraying the personal and professional battles that made the US judiciary, and indeed, the national government itself into institutions that could both survive in the short term and thrive in the long term. Extremely well-researched. Difficult to stop listening to.

A necessity in the study of our Constitution.

While we may know Madison as the father (one of) the Constitution, Marshal raised it out of infancy. Impressed by his balance and discipline yet disappointed on his view of slavery. This book is essential. This is one you'll study.

This was a great listen and will have you wanting to learn more about Marshall and his life on the court and the impact on the USA.

i have been wanting to listen to this book for a while. John Marshall in my opinion the grestest of all Justices. He invented the Court to what the Court is today and future. If you have and interest in how the Justices of the Supreme Court get there obgation each brank of the Federal Government John Marshall established it.

Was thoroughly entertained and enlightened by this book

This book is outstanding to me because it presented the history of Chief Justice John Marshall’s life within the atmosphere of the world he lived in at the founding of the country and provided the various interests of others and their motivations to influence early decisions of the Supreme Court. I’ll going to listen to it again, a first for me, I usually just move to new audio books, but in this case I believe I’ll pick up important elements that flew past me the first time.

Interesting and straightforward overviews one of our most significant (chief) Supreme Court justices. would recommend supplementary reading on individual decisions.

Enjoyed the content and reading greatly and will enjoy listening again. This Work also will lead to more Founding Fathers reading.