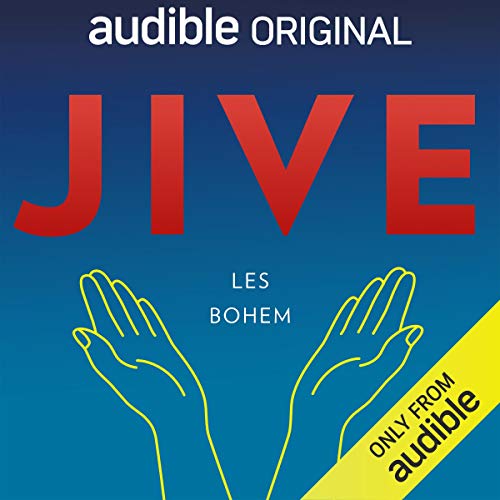 The events of Jive take place in a not-too-distant future where things have gone from bad to worse. After the pandemics (and yes, there will be more) came the Bloom, an invasion that arrived in a way that no one could have predicted. It was a genetic invasion, the ancient alien hidden in our DNA “blooming”, an event that killed a third of the world population (that’s over one billion) and mutated a third into something slightly “more” than human. They were a daunting presence - and they were in charge. Their appetites were voracious. Impossible. Food, drink and drugs, sex, violence. The remaining third, despite the genetic key in their blood, had remained human. For them, life had been a waking nightmare.

But the humans had found a way to fight back. A way to win. And now the humans had landed back on top. But the world has been fundamentally changed. It will never be the same. Stuart Cornfeld missed the entire thing. He was in maximum security lock-up as the world outside went mad. The world may have changed, but Stuart hasn’t changed at all. He comes out into this new world the same passionately narcissistic, single-minded con man he has always been. And the new world is desperate for just that sort of messiah. Jive tells the story of Stuart’s meteoric rise from prisoner to prophet; of those who want to keep him in power and those who will do anything to bring him down.

Jive thrillingly sets the byzantine rules that control our future, then gives us the only man fit to follow them as our leader: Listener, meet Stuart Cornfeld. This isn’t going to be pretty.

A Big Story in a Small Package

This was the first story I've heard from Les Bohem, but his talent for storytelling was obvious right away.
His characters, dialogue, and world building were all spectacular. And while I cannot think of pretty words to sell this story right now - in times like these I think of the book title 'Me talk Pretty Someday' - just give it a try. As my basic training company commander said many decades ago used to say, "It's Huah, you'll like it." Okay, it's nothing like Army training, but still, listen.

Funny, cynical, magical. An absolute treasure to listen to. I’m about to listen again. And try to find my MFer.

Fun, biting, smart and hilarious. Such a great listen. Les Bohem is one of my favorite authors!

A quick, but detailed, look into the workings of a liar's mind and the abrupt payment for his sons.

Fun, biting, satiric, Bohem hits all the right notes in this story of a dystopian near future. He found his inner motherf******. Listen to it and you’ll know what I mean. An entertaining follow up to his novel “Junk”, but stands in its own as well.

Snarky dystopian story, told well. The characters were as believable as the plotline of the story

must be alot of paid raters.

Did not care for style, characters, or subject. could not make it through the first hour of the book.

I loved the summary of the book and the world that was created, but the story itself felt unfinished. I know this is a short story, but plot elements are introduced without ever being addressed leaving hanging threads that leave me feeling like much of the story is missing. It is as if either the author ran out of space in the constraints of the short story and didn’t care enough to make the story more self contained or he wanted to create a story that left the audience as disconcerted as the world in which the book take place.
If the purpose of art is to bring forth emotions, this is art. It is just unsatisfying for me to read.

Yet another strong Audible original.

Audible Originals continue to impress, and this is a prime example. Short, sharp, and interesting. That said, the plot somewhat meanders, which a short story can ill afford. It was a solid distraction for a long day walking. Recommended.