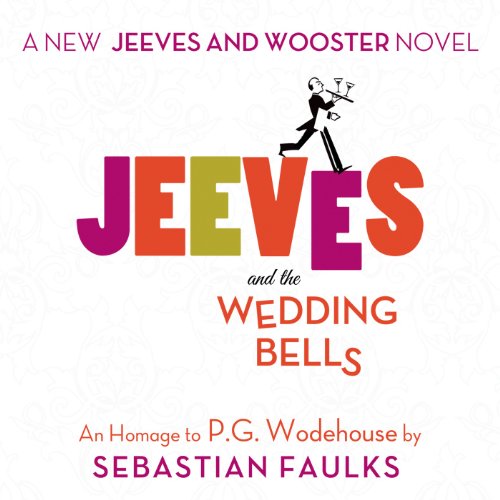 Bertie Wooster (a young man about town) and his butler Jeeves (the very model of the modern manservant) - return in their first new novel in nearly 40 years: Jeeves and the Wedding Bells by Sebastian Faulks.

P. G. Wodehouse documented the lives of the inimitable Jeeves and Wooster for nearly 60 years, from their first appearance, in 1915, ("Extricating Young Gussie") to his final completed novel (Aunts Aren't Gentlemen), in 1974. These two were the finest creations of a novelist widely proclaimed to be the finest comic English writer by critics and fans alike. Now, 40 years later, Bertie and Jeeves return in a hilarious affair of mix-ups and mishaps.

With the approval of the Wodehouse estate, acclaimed novelist Sebastian Faulks brings these two back to life for their legion of fans. Bertie, nursing a bit of heartbreak over the recent engagement of one Georgina Meadowes to someone not named Wooster, agrees to "help" his old friend Peregrine "Woody" Beeching, whose own romance is foundering. That this means an outing to Dorset, away from an impending visit from Aunt Agatha, is merely an extra benefit. Almost immediately, things go awry and the simple plan quickly becomes complicated. Jeeves ends up impersonating one Lord Etringham, while Bertie pretends to be Jeeves' manservant "Wilberforce," - and this all happens under the same roof as the now affianced Ms. Meadowes.

From there the plot becomes even more hilarious and convoluted, in a brilliantly conceived, seamlessly written comic work worthy of the master himself.

Jeeves and the Wedding Bellsに寄せられたリスナーの声

I've read every Wodehouse book I could get my hands on, and he's definitely one of my top ten authors of all time. It must have been a scary proposition for someone to attempt to continue his work, but I'm very glad that Mr. Faulks did so.

I think it would be hard to get any closer than this to the "real thing." It's obvious this author knows his Wodehouse. The humor, mannerisms, and style of speech are definitely faithful to the Wodehouse tradition. I hope that he will continue the series, as I'd like to see what happens with this new direction he's taken with Bertie and Jeeves. (I'd also like to see the author tackle another of my favorite Wodehouse characters--Psmith.)

They say that imitation is the greatest form of flattery. I think P.G.W. would be very flattered by this novel.

Would you listen to Jeeves and the Wedding Bells again? Why?

Yes, I would, because the English jargon and references speed by too quickly for an American listener, and they obviously add to the humor.

What other book might you compare Jeeves and the Wedding Bells to and why?

Any of the original Wodehouse Jeeves series.

Which character – as performed by Julian Rhind-Tutt – was your favorite?

No question: Bertie Wooster. The narrator perfectly catches his befuddled and slow-in-the-uptake persona.

If you could rename Jeeves and the Wedding Bells, what would you call it?

I was a bit nervous for the author when taking this one on. The Wodehouse series of Jeeves novels is an absolute classic, with a very specific usual plot type, extraordinary and unusual usage of language, distinct characterizations, and both highly English and highly intellectual references sprinkled throughout. This author did not just take on a genre, he took on a one-of-a-kind genre originally penned by the creator and master of the art. I enjoyed this book, actually, more than any of the Wodehouse originals!

Where does Jeeves and the Wedding Bells rank among all the audiobooks you’ve listened to so far?

What other book might you compare Jeeves and the Wedding Bells to and why?

not as good as wodehouse at his best, but better than some of p.g.'s lesser works.

his contagious sense of fun in reading.

if i had a spare 7 hours, on a plane or driving, absolutely.

author has been criticized unfairly for taking on a challenging assignment. he did an admirable job. if people would rather just read p.g.'s writings, they should just go ahead, but having this available doesn't hurt anyone and should provide enjoyment to many.

Delightful in every regard. Superb and sympathetic reader. An affectionate tribute to the master himself that is to say Wodehouse. Highly recommended.

Wonderfully done. I felt as though P.F. was back with us. A great romp.. loved

This should have been Wodehouse's last book!!!

What made the experience of listening to Jeeves and the Wedding Bells the most enjoyable?

I am a P.G. Wodehouse fan either reading and or listening to every Bertie and Jeeves book. I have read many of his older works as well. Some many times. But I must admit that I had a lack of fulfillment in that Bertie's good qualities were never recognized and he never moved on in life. I can't say much more not to spoil the book. I had reflected in the past what Wodehouse should have done in his last book and this is it. The author is a genius in that he understands so well Wodehouse's farcical method and he incorporated many of the old bits of P.G. I found it even funnier hearing them again from someone else. The ending was moving and again one that was needed. The family of P.G Wodehouse approved of the book and I look forward to listening to it again. It is best heard with headphones. The reader is a little hard to understand at first but I picked up his tune quickly.

I liked this book very much--but it was not exactly what I was unconsciously hoping for. I think after hearing Wodehouse read by Jonathan Cecil (Audible) and played so outrageously comically by Hugh Laurie & Stephen Fry (TV), I was hoping for something that approximated what I had in memory.

That was my big mistake. This book is very good--it is quite clever, and fun to listen to. However, I initially wanted it to be what it wasn't. When I stopped that--and listened to it on it's own merits, I found it to be delightful. Suggest you do not try too hard to make it into the next sequel to either past book-on-tape narration or tv characters, but allow this book to be itself.

Sebastian Faulks has done a very good job of carrying on in the tradition of Wodehouse--not an easy task at all. This is a fine and fun book to listen to, and would be even more fun (I think) for someone whose memory was less engrained with other voices for the characters. I think Wodehouse himself would approve of Faulks continuation of his characters and style. It is all very well done. I really do recommend this book--it's a fun listen, and hopefully the listener will approach it from the beginning for the pleasure it will bring as it is (without expecting voices that have spoken for Jeeves and Wooster in the past).

Do try this--it's a lot of fun. Just as the original Wodehouse books are! The narration is also very good--just not what I was previously used to.

An absolute tribute to P.G Woodehouse

I was thrilled with this resurrection of Jeeves and Wooster excellently written and performed fans will not be disappointed.

Authentic and satisfying -- a perfect end

I loved this final chapter in the adventures of Wooster and Jeeves! Sebastian Faulks did an outstanding job preserving the delightful style and characters of PG Wodehouse. Wooster is himself as we always knew and loved him -- a kind-hearted, deliciously absurd dear. And Jeeves is still Jeeves, if a bit more retiring than in Wodehouse's books. Many of the previous characters -- Stiffy Bing, Stinker Pinker, the dog Bartholemew -- make an appearance, Bertie finally guesses one of Jeeves' quotations correctly, and all is joy and light in the end. A wonderful finale for fans of Bertie and Jeeves!