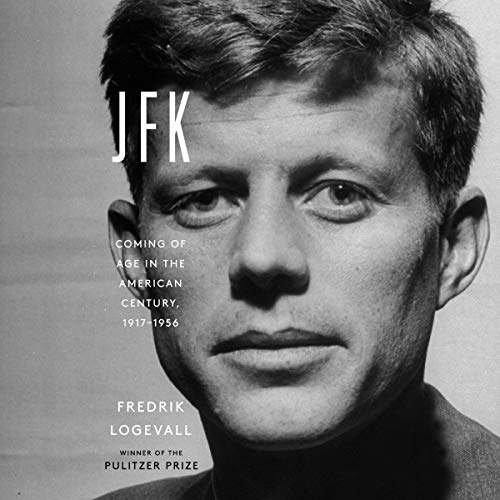 “An utterly incandescent study of one of the most consequential figures of the twentieth century....With JFK, Fredrik Logevall has reinvented the genre of presidential biography, casting new light on the man and, far more profoundly, on the times. This is a brisk, authoritative, and candid biography, and a wonderfully compelling history of America’s heady and troubled mid-century rise.” (Jill Lepore, author of These Truths: A History of the United States)

“Our best historian of the Vietnam War now turns to another subject you thought you already knew, and he makes John F. Kennedy as alive and compelling as if you were reading about him for the first time. Fredrik Logevall portrays the young JFK with the masterful intimacy and sympathy that only a great scholar and writer could achieve.” (George Packer, author of The Unwinding: An Inner History of the New America and Our Man: Richard Holbrooke and the End of the American Century)

“John F. Kennedy was a man before he was a monument, and among the great achievements of this wonderful book is how brilliantly Fredrik Logevall conveys both JFK’s humanity and the history of the age. With precision and with grace, Logevall has given us a memorable portrait of a man and of the world that, before he shaped it, shaped him. It’s a powerful, provocative, and above all compelling book.” (Jon Meacham, Pulitzer Prize-winning author of The Soul of America)

A Pulitzer Prize-winning historian takes us as close as we have ever been to the real John F. Kennedy in this revelatory biography of the iconic, yet still elusive, 35th president.

“An utterly incandescent study of one of the most consequential figures of the twentieth century.” (Jill Lepore, author of These Truths: A History of the United States)

By the time of his assassination in 1963, John F. Kennedy stood at the helm of the greatest power the world had ever seen, a booming American nation that he had steered through some of the most perilous diplomatic standoffs of the Cold War. Born in 1917 to a striving Irish American family that had become among Boston’s wealthiest, Kennedy knew political ambition from an early age, and his meteoric rise to become the youngest elected president cemented his status as one of the most mythologized figures in American history. And while hagiographic portrayals of his dazzling charisma, reports of his extramarital affairs, and disagreements over his political legacy have come and gone in the decades since his untimely death, these accounts all fail to capture the full person

Beckoned by this gap in our historical knowledge, Fredrik Logevall has spent much of the last decade searching for the “real” JFK. The result of this prodigious effort is a sweeping two-volume biography that properly contextualizes Kennedy amidst the roiling American Century. This volume spans the first thirty-nine years of JFK’s life - from birth through his decision to run for president - to reveal his early relationships, his formative experiences during World War II, his ideas, his writings, his political aspirations. In examining these pre-White House years, Logevall shows us a more serious, independently minded Kennedy than we’ve previously known, whose distinct international sensibility would prepare him to enter national politics at a critical moment in modern US history.

Along the way, Logevall tells the parallel story of America’s midcentury rise. As Kennedy comes of age, we see the charged debate between isolationists and interventionists in the years before Pearl Harbor; the tumult of the Second World War, through which the United States emerged as a global colossus; the outbreak and spread of the Cold War; the domestic politics of anti-Communism and the attendant scourge of McCarthyism; the growth of television’s influence on politics; and more.

JFK: Coming of Age in the American Century, 1917-1956 is a sweeping history of the United States in the middle decades of the 20th century, as well as the clearest portrait we have of this enigmatic American icon.

Great book, wish the second part was available now! Mark Deakins is one of the best narrator’s in the business.

Beautifully narrated & written . I lived the years of the Kennedy & admired his tenacity and brilliance.everyone should read this wonderful book.
Ester AclanRn, BSN

This book was VERY detailed starting from his birth and before. I recommend this to anyone fascinated with JFK..You’ll definitely learn things I promise you never knew about him and his family.

A very thorough book on the life of John Fitzgerald kennedy. the narration was very good and clear with much information on this president.

Excellent Portrait of JFK & His Times

This is an extremely well done biography & masterfully narrated. Have read & studied John F. Kennedy a lot, but still learned a LOT from this book. It is a vivid & lifelike portrait of JFK, but also of his family & the remarkable times in which he lived. I cannot imagine a better portrait of the man as he really was. Smart. Funny. Sloppy. Suave. Sometimes insensitive & manipulative. But beloved, bold & inspiring. The Kennedy family history is fascinating & crisply told. His father Joseph P. Kennedy receives a thorough & balanced treatment. The father's philandering established a pattern for his sons & JFK was prolific & reckless in this regard even as he matured & established himself as a public figure of substance. The recounting of JFK's travels in pre-WWII Europe is outstanding, as is the story of how it influenced him & how he differed from his father & his older brother with regard to isolationism vs. interventionism. The same is true for the chapters on PT-109 & Kennedy's myriad health problems. Logevall also does first-rate work on the Kennedy family's close connections to red-baiting demagogue Joseph McCarthy. All the other significant figures in JFK's young life received their due, including, of course, Jacqueline, Rose, Bobby, sister Kathleen, friends like Lem Billings & aides like Ted Sorenson. Just a really great book that never lags or bogs down. The narration by Mark Deakins is virtually flawless & beautifully fits the text. Highly recommend.

In short, Friederik Logevall has produced a phenomenal biography.

This biographical manuscript is comprehensive yet held my interest from beginning to end. Spanning the years 1917-1956, the arc of this book examines, in great detail, how the Second World War and early Cold War shaped JFK. A significant advantage Friederik Logevall has in approaching a JFK biography, is his previous scholarship on the Vietnam War. Specifically in his book "Embers of War The Fall of an Empire and the Making of America's Vietnam". The present volume concludes at the 1956 DNC, after JFK failed to secure the vice-presidential nomination. Just on the eve of when JFK begins to shape many of the pivotal events of the Cold War himself. For this reason, I am looking forward to Logevall's second volume. (In particular JFK's role in the early stages of the Vietnam War.)

Mark Deakins has long been one of my favorite narrators and delivers a splendid performance in the present volume. I very much hope he narrates the second volume of this Duology.

(Mark Deakins narrates two other presidential biographies I highly recommend; Days of Fire by Peter Baker and Traitor to His Class by H.W. Brands)

Very disappointing. I was really looking forward to this book but the audio quality is terrible. It skips every other sentence. This is the first time I have this issue on audible.

I include this author with Robert Caro, William Manchester, Shebly Foote and Ian Toll. All these authors know how to find the historical facts that inform the reader and at the same time tell a good story - and what a story! The only problem . . . now we have to wait several years for the final volume.

The bio that both scholars and enthusiasts deserve

There are many JFK books out there but few of them take the subject matter as seriously as Fredrik Logevall does. This biography debunks many of the myths surrounding the 35th president like how he allegedly didn't write Profiles in Courage, was a playboy who never took anything seriously, and was forced into politics by his father who was still mourning the loss of his first born son, Joseph. These myths, as well as many others, are thoroughly discussed, discredited, and replaced with solid research that paints JFK in a new and honest light. Logevall has set an all new standard with this insightful biography.

No doubt that this book and its proposed second volume will be the top selling books written by this author. That is a tragedy. The author, Professor Logevall, is the eminent scholar of the long American trajectory that ended in the US involvement in Vietnam. Indeed, Kennedy’s life is the summation and culmination of the same, as Kennedy’s life span covered by this biography takes place during the same period covered in this book, and the upcoming volume.

However, this book does not have the gravitas of the Professor’s previous excellent writings. In many ways, this book felt that it was on one hand hagiographic. Elsewhere, such as the chapter on Jackie Kennedy, it becomes almost completely tabloid. Clearly, there is an audience that has an exceptional appetite for consumption of all things celebrity.

JFK perpetuates notions of the romance of Camelot, and that is itself the American tragedy that brought us to the current state of America. The sacrifice of critical thinking in favor of joining the throng of celebrity worship.