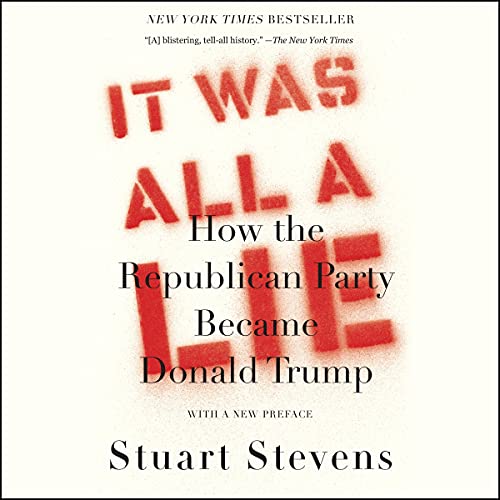 "Stevens stands out among Trump’s conservative critics because of his candor about the deeper rot at the core of the GOP.... He offers a grand mea culpa for his own role in paving the way for Trumpism." (Sean Illing, Vox)

"This book is going to become an important reference volume for future historians trying to explain what happened to the Republican Party in the second half of the 20th century and the Trump era. It takes someone with Stuart Stevens' insights as a writer to be able to see this story and deliver it to us the way he has." (Lawrence O'Donnell)

"An epitaph, of interest to all politics junkies, for a formerly venerable party by a champion-turned-gravedigger." (Kirkus)

From the most successful Republican political operative of his generation, a searing, unflinching, and deeply personal exposé of how his party became what it is today

“A blistering tell-all history. In his bare-knuckles account, Stevens confesses [that] the entire apparatus of his Republican Party is built on a pack of lies." (The New York Times)

Stuart Stevens spent decades electing Republicans at every level, from presidents to senators to local officials. He knows the GOP as intimately as anyone in America, and in this new book he offers a devastating portrait of a party that has lost its moral and political compass.

This is not a book about how Donald J. Trump hijacked the Republican Party and changed it into something else. Stevens shows how Trump is in fact the natural outcome of five decades of hypocrisy and self-delusion, dating all the way back to the civil rights legislation of the early 1960s. Stevens shows how racism has always lurked in the modern GOP's DNA, from Goldwater's opposition to desegregation to Ronald Reagan's welfare queens and states' rights rhetoric. He gives an insider's account of the rank hypocrisy of the party's claims to embody "family values", and shows how the party's vaunted commitment to fiscal responsibility has been a charade since the 1980s. When a party stands for nothing, he argues, it is only natural that it will be taken over by the loudest and angriest voices in the room.

It Was All a Lieに寄せられたリスナーの声

Oh man this book is fantastic. Of course it’s a bit of confirmation bias on my part. I grew up in a Republican household in a conservative community but have never been able to square the contradictions and hypocrisy that I’ve seen in the party over the years. I usually don’t bother with books that rail against Donald Trump. His flaws are so obvious that there’s no point in wasting my time. But this book is different because it’s written by a conservative who obviously cares about the direction of the Republican party. He pulls back the curtain and shows how Republican strategy has been leading towards Donald Trump since the 1960s. Of course a similar book could be written about the Democratic party but that’s not what you’re going to find here. It’s not a book about how much better the Democrats are than the Republicans, just an honest look at how the GOP has lost it’s way. If you are a fan of Donald Trump and the current direction of the party you aren’t going to appreciate this book but if you are a conservative who feels like you’ve lost your party than it’s worth listening to.

An Unsparing Overview of the Demise of the GOP

While libraries of books will be written in an effort to understand how and why the US elected to its highest office a man without morality, character, or intellect, I have been more interested in understanding how an entire political party collapsed in just a few months. Trump has turned his back on literally every single tenet of conservatism, and his Congressional supporters hold him so close it's impossible to tell where one starts and another ends. Stevens provides an unsparing 'autopsy' of the party he helped to build. He flinches neither from his own role nor the utter pessimism with which he views the future of the party. In fact, he concludes that there is no longer a Republican party...a party without ideas, integrity, or policy is simply a cult. The pain Stevens feels in painstakingly tracing the fault lines of the GOP is palpable, as is his final conclusion: all the values and principles touted by Republican leaders were a lie, a facade to hide naked power grabs, and to maintain wealth and privilege. Indeed, he concludes that even the most baseline level of decency is utterly absent throughout the GOP, with the possible exceptions of Larry Hogan and Charlie Baker. In my opinion, whatever the result of the 2020 elections, time will prove the eternal accuracy of Rick Wilson's infamous prediction: "Everything Trump Touches Dies".

I dare Republicans to read this and face facts!

The author spent decades electing Republicans as an internal operative and consultant. He lays bare the demise of the Republican Party. The book is chock-full of examples that Republicans can't ignore, and the rest of the country needs to understand.

He explains how cheating, racism, and playing on fears he got multiple Republican candidates elected to all levels of government. Basically, "...five decades of hypocrisy and self-delusional."

He also works expose the lies perpetrated the anti-science conservative media, and how they, like the republican party, have had to rely on conspiracy theories and alternative facts to stay in power.

He shows how Republicans are not interested in fiscal responsibility and have been the party of the rich, systematically marginalizing non-white voters. He explains how Trump rose to power and how he will try to stay in power by cheating, from slowing down mail delivery, to even putting Kanye West on the ballot. That's right, Trump's attorneys are adding a black secondary presidential candidate, in order like Nixon did in the south, to pull voters away from the Democratic candidate.

A must-read for anybody that wants to see the truth elegantly laid out in an entertaining read.

Brilliant Summary Of How We Got Here

Didn’t know who Stuart Stevens was until today. Very glad to have been introduced to him now!

Must Read for All Americans

This author clarifies the reason behind the Republican party's madness. Winning at the expense of anything good has become their mantra. Be prepared to grit your teeth.

This books puts into words what I have felt since 2015. Every one should read this before election day.

Wow, truth from a Republican. It’s about time!

From a man who worked in the Republican Party for most of his life and helped get a lot of them elected, he opens up with a honest truth about the happenings over many years! A must listen to anyone especially Republicans who love to put their heads in the sand! I listen to tons of books and this is one of the best! Great job Stuart

Fair and accurate history of the Republicans party. Explains why the R's have difficult road ahead to restore a principles to a party stripped of any morals or purpose.

good in every way...

I will re listen to this book, it confirms my personal beliefs about trump and the Republican party. I would like
a reporter to interview as many Republicans as possible from now to November and give them a chance to respond and rethink (?) their standing within the party out loud for the public to hear. I want it documented one by one, where their head is at and what they stand for.

Wow...this book was amazingly deceptive. I give the author credit for his ability to weave the half-truths and outright lies into a seemingly full-proof argument against Trump, the Republican Party, and Conservatives in general. Here are just a couple of facts carefully hidden in the first chapter "Race: The Original Republican Sin" that if you didn't already know, you would come away believing the opposite is true.

1) George Wallace was a Democrat.
2) The Civil Rights Act of 1964 was passed with a vast majority of Republicans. In fact, the longest filibuster in history was lead by the Democrats to stop this bill from passing. In the Senate, 78% of the "no" vote was Democrat. In the House, it was 74%.
3) Only 6 Republican Senators voted "no" to the bill, including Barry Goldwater. However, Goldwater had always been a strong supporter of civil rights before and after this bill. He just believed it was a state's rights issue.
4) The KKK and "Jim Crow" was created by the Democrats to keep black people from voting Republican.
5) No, the party's did not switch. The South was not a majority Republican until 1992. So if your premise is that the South is Republican because they're racist, it only took them 30 years after the Civil Rights act to get there.

This book is smoke and mirrors. In each chapter, the author creates a series of straw man arguments building upon the previous false arguments until he culminates into an absolute rant against Trump.

We all know the truth

All Americans should read this book and have 5min to ponder about their values and what they represent for generations to come. Republicans are taking America to a level of corruption and revolting racism to another level of insanity. America is lost if republicans have their way and walking at large steps to a new Babilónia

An honest self-appraisal that needs listening to

The book is well written and well narrated [though it was a shame that Stuart Stevens was not the narrator, as author-narrated audio books help you to hear the emotions associated with the text]. For those who approach this book from a left of centre perspective, there will be much in here that confirms the Democratic critique of Republican politics over the last half-century, For right of centre readers, however, there is lot in here that will challenge you because the critique is made by a genuine conservative, not a progressive, who throughout this period believed that the darker side of the right was a minority to be marginalised only for Donald Trump to expose just how substantial this wing of the right actually was. If a principled, mainstream American conservatism is to ultimately triumph over the Populist Nationalism that has overtaken the Republican Party, the lessons from this book must be learned because just as Trump's nomination in 2016 came through a candidate consolidating an 'Alt-Right' that had played little part in Republican politics previously, the best hope for American conservatism is for a new, reformed conservative leader to emerge who can bring back to the party the Never Trump Conservatives and Conservative Democrats who would ordinarily have been Republican's but for Trump and the Tea Party.

This book was extremely compelling and displays all that is wrong with the American political system.