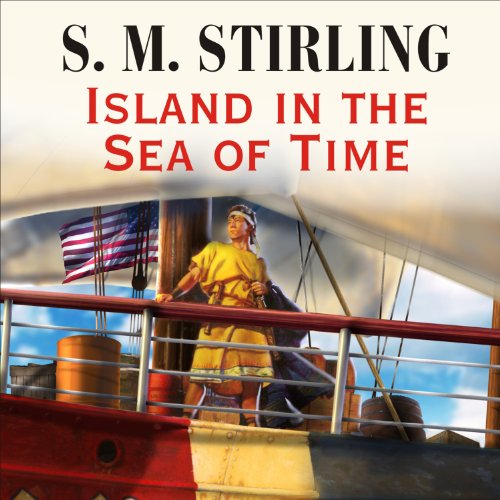 Island in the Sea of Time

During a perfect spring evening on Nantucket, a violent storm erupts and a dome of crawling, colored fire blankets the island. When the howling winds subside and the night skies clear, the stars appear to have shifted. The mainland has become a wilderness of unbroken forest, where tools of bronze and stone litter the beaches, and primitive natives scatter in terror.

A startling phenomenon has occurred: The island of Nantucket has been swept into the long-ago past. With its inhabitants adrift in the year 1250 BC, there is only one question to be answered: Can they survive?

Island in the Sea of Timeに寄せられたリスナーの声

The writing is much better; less cliches (although dawn comes up like thunder -how does this metaphor even work, I've always wondered).
Bonus points for strong female characters without all of them being over the top.
Alas, like 1632, the book is so long (not that I mind) that one tends to start wondering about the plausibility of the rapid adaptations of what remains of 20th century technology to the times -steam engines and the like. Not as quickly in this series but still.
Also, the bad guy, while evil to the core is not a cartoon and needs to be the sociopath he is for what he does to work.
Unlike 1632, one can't Wiki the history (what on earth was the 30 years war -ah, there it is-MY GOD!) along with the plot. Many of the civilizations exist only in speculative and sometimes somewhat arcane archaeology.I kind of wonder if this is a cult book on Nantucket and at the USCG Academy.

Listen to this before "Dies the fire"

I got this after i had listened to the "Dies the fire" series, and was slightly disappointed. Not that the book is bad, it isn't. Its quite good. But many of the same ideas, themes and plot devices are used in his later books (only natural, as they are all tied together). However, Island in a Sea of Time feels far less polished then the later books. Again, not surprising, but for maximum enjoyment and to try ro follow the proper timeline, this one first.

Great narration, and regardless of the order they are read, i enjoy SM Sterlings' writing, and this was no exception.

Island in the Sea of Time

As I listened to it I kept thinking that I would have loved this book when I was in high school. It was published in 1998 when I was 18, and I think the 18 year old me would have gotten a kick out of it. That's not to say that this is an immature book. It has some very adult themes and deals with a lot of history and how to create a political society from scratch. There's a lot of action, violence and sex thrown in as well. I guess what I'm getting at is when I was younger I was less prone to say, "Wait a minute." And I would have just enjoyed the story for what it was.

My biggest problem was that I couldn't relate to the main characters very well. You may find it hard to believe, but I don't have a lot in common with an African American lesbian coast guard captain/samurai warrior. In fact I doubt that any person remotely resembles that description in real life. I guess I could be wrong. Also, there were a lot of people comiting suicide before they even had time to figure out what was going on. I honestly don't feel like that's very realistic.

What I enjoyed most about this book was the speculative stuff. How to manage a society and start a government and rebuild a civilization. That may be boring to some people, but I like it.

McLaren does a good job narrating. He does a lot of sound effects with his own voice and mouth that at times was funny, like kids making their own gun noises, but I applaud his effort.

Loved this first book in the series...BUT:

I was totally hooked into this one, 25 hours of pure bliss, I couldn't get enough. Absolutely great writing, great narration, loved the plot lines, etc. BUT - of course I bought the rest of the series, "Against the Tide of Years" and "On the Oceans of Eternity" - and they were a lot harder for me to finish. This story did not need to be spread out as long as this, and the plot lines got very threadbare and bedraggled by the last 20 hours or so. The characters I originally met in "Island.." starting taking back seats or disappearing altogether. The bad guy from the island (Walker) is not around much in the 2nd book and disposed of in a very unsatifying way in the 3rd, and really most of the 2nd and the entire 3rd is just a waste of time, IMHO. Consider yourself warned - if you get bored in the middle of #2, you can just quit and you won't miss anything.

This is my first review of any audible "book" in the 4 years that I've been a member. This book held my interest and was so interesting that upon finishing this book I downloaded the other two books in this specific series. It's also my first foray into science fiction from mysteries and adventuer novels and I'm glad I downloaded it. It sure held my interest and made me want to listen to more books that the author has done. For me, it was a wonderful choice.

I wanted to see if other readers felt the same as me and came across Charles' rant:

"This is sick trash!!
By Charles (Lumberton, Texas, United States) Jun 11, 2011
"I cannot believe all the 5 star ratings that this book received. The main character is a black, gay, women , who is a captain in the coast guard. She seduces a teenage girl, can outfight any man in the known world, great military tactician, and somewhat a minor politician. Ridiculous!! There is numerous lesbian sex scenes, S&M sex scenes, rape, and one character who teaches two 12 year old girls to use S&M sexual torture on a male prisoner. This is the worst trash I have ever listened to and be assured I'm not a prude or bible thump-er. Makes me wonder what kind of sicko this author is."

Now, I didn't care for the book for a couple of reasons, but I completely disagree with Sir Charles. Dude, saying you aren't a Bible thumper (or a bigot) doesn't make it any less true. Some of what Charles mentions is actually what made me stick with the book to the end. Well, different strokes I guess. That being said, I wouldn't recommend the book. I recognize that a lot of people did/will enjoy it, but the book was a mixed bag for me. It started out well...time travel and the struggle to adapt to a novel environment, but then it gets a little bogged down in agricultural/fishing/division of labor details, which reminded me a little of Moby Dick. I'm of the opinion that Melville could have told the story of Moby Dick in about fifty pages and the same could be said of Island. Again, different strokes. The second half of the book is mostly military strategy and battle sequences. It was too much an amalgam of stories I've read before. I considered getting the entire Nantucket series, but I think I'll go in a different direction this time.

I listened to this over a year and a half ago and just noticed I never did a review. What I recall the most is the realism the author painted of an alternate history. I'm not totally sure if alternate history is the exact fit but is probably the closest. An island and a ship get sent way back in time and they must figure out a way to survive. The island (Nantucket) is mainly tourist cottages and summer homes for the rich. The island is nowhere near self sufficient which becomes painfully evident when it is suddenly thrust back a few hundred years B.C. They lost their power and their supply chain of food and petroleum. The gas stations have what gas they had in their tanks but no way to refill when it runs out. No source for Coffee, milk, produce, etc. You get the picture. Now they need to find a way to survive until they return to their own time - if they ever return. Forget any type of "prime directive" in terms screwing up the time-line, they are screwing with it... and bad. They figure they have to in order to survive. They didn't ask for this to happen and they are doing what they must.

It drags on a little in some places but all-in-all is a good read.

Alternative hitory at its best

Would you consider the audio edition of Island in the Sea of Time to be better than the print version?

What other book might you compare Island in the Sea of Time to and why?

Which character – as performed by Todd McLaren – was your favorite?

Yea stayed up all night to finish it up.

This has not aged well in my opinion

This book has gratuitous language and sexual acts that are really disturbing and not what I was looking for in an alternate history novel.

Island in the sea of time

If you could sum up Island in the Sea of Time in three words, what would they be?

Was a good back story to the other books

Which character – as performed by Todd McLaren – was your favourite?

All of them very well characterised

Enjoyed listening to the book

I loved this series - and the much longer one that followed it.

I listen to my audio-books whilst driving and this series had me looking forward to long car journeys. The initial plot mechanism is interesting and, apart from the initial series of coincidences necessary to get the ball rolling, the story develops well and the author generally adheres well to the rules of his universe.

A good story well told (not a great story excellently read) with an interesting central idea and interesting characters. People have said that it lacks the depth of greys between the good and bad and yes, I think that is fair comment. Others have said it is very feminist and I can't honestly agree personally though others obviously do and yes, the female characters are strong.

Whilst it was well read, it was sometimes hard to discern a new paragraph or section in the story though otherwise it was solidly done.

Overall, this was an enjoyable story, my first alternate history book (if you don't count 1984) and it will be a genre and author I will return to.

Island in the sea of time

I HAVE READ THE SERISE AT LEAST 5 TIMES ALLWAYS FINDING NEW TIDBITS.PLEASE WRITE A SEQUEL.I'D LIKE TO SEE WHAT THE DAUGHTER REBUILDS IN CENTRAL EUROPE.