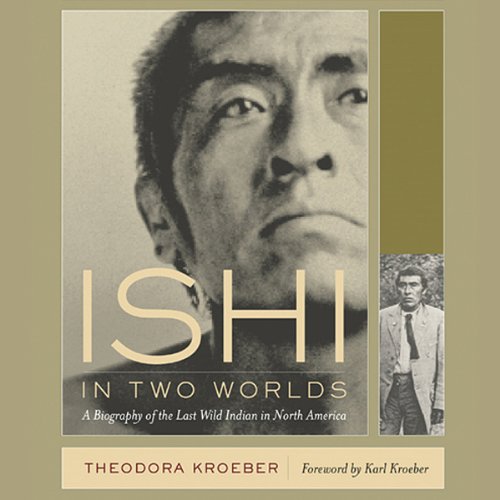 "Mrs. Kroeber...tells [Ishi's story] with an integrity and insight that raises it to the level of history that is also art." ( Washington Post)
"This magnificent biography...shows man at his best." ( San Francisco Examiner)
"One of the most moving, tragic and ultimately triumphant human stories I have ever read.... " ( Los Angeles Times)

The life story of Ishi, the last Yahi Indian, lone survivor of an exterminated tribe, is unique in the annals of North American anthropology. Ishi stumbled into the 20th century on the morning of August 29, 1911, when, desperate with hunger and terrified of the white murderers of his family, he was found in the corral of a slaughterhouse near Oroville, California. Finally identified as a Yahi by an anthropologist, Ishi was brought to San Francisco by Professor T. T. Waterman and lived there the rest of his life under the care and protection of Alfred Kroeber and the staff of the University of California's Museum of Anthropology.
©2002 Regents of the University of California (P)1996 Blackstone Audio, Inc.

Just so strident and awful

PLEASE give tone some thought

not good. first chapter about authors and not Ishi. after that it was a little more about Ishi but it was written like an anthropology text book. very little about actual person Ishi.

I want to learn about Ishi but got bored and so disappointed by second or third chapter i marked it as finished.

not a good biography

a fascinating and sad biography

I read this book every yr for hin ty ing camp. better on audible. narrator a bit slow. best played at 120%

you have got to be kidding

this book could be down to about 1 chapter,, BUT the writer decides to explain everything in to much detail with references etc. it sounds like 1st grade story time with big words and their explanations. I could not finish it. I have a large collection of audio books. This one by far should win the "annoy an idiot" award. If you buy this book take nots to keep yourself in check as to what is really going on. because you will learn a word and its origins in the universe, how to use it and who used, what all books and languages its meanings mean, the time of day it was created and how not to use it when addressing the yard gnome on thursday at 3 pm when its raining. then one time at band camp I too used this word but my cousins uncles, neighbors, childhood friend of 3 years and his sisters mothers cousin with a goat that we all knew.
I actually tried to write this review as this book has been wrote. It is a great story but not this version. its to political and bias from the christian opinion of its authors.

I am sorry but my opinion is the its not staying in my library or on my ipod. I don't write bad reviews but this should have never passed publishing.. a true butchering of a Native HERO!

Not my cup of tea

I finished it, however I think if I was more interested in anthropology and/or history, I would have liked it better.

Ishi an understanding of a beautiful soul