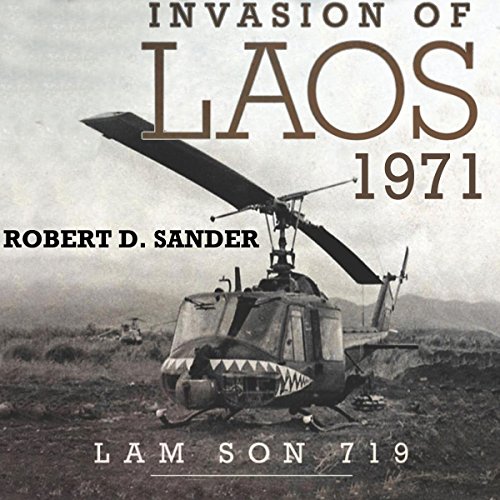 "Sander's vivid accounts of the heroic actions of his fellow helicopter pilots and crewmen are especially noteworthy. Invasion of Laos deserves to be a part of any Vietnam War library or collection." (Andrew Wiest, author of Vietnam's Forgotten Army: Heroism and Betrayal in the ARVN)

In 1971, while US ground forces were prohibited from crossing the Laotian border, a South Vietnamese Army corps, with US air support, launched the largest airmobile operation in the history of warfare, Lam Son 719. The objective: to sever the North Vietnamese Army's main logistical artery, the Ho Chi Minh Trail, at its hub, Tchepone in Laos, an operation that, according to General Creighton Abrams, could have been the decisive battle of the war. Hastening the withdrawal of US forces and ensuring the survival of South Vietnam. The outcome: defeat of the South Vietnamese Army and heavy losses of US helicopters and aircrews, but a successful preemptive strike that met President Nixon's near-term political objectives.

Author Robert Sander, a helicopter pilot in Lam Son 719, explores why an operation of such importance failed. Sander's conclusion is at once powerful and persuasively clear. Lam Son 719 was doomed in both the planning and execution-a casualty of domestic and international politics, flawed assumptions, incompetent execution, and the resolve of the North Vietnamese Army. A powerful work of military and political history, this book offers eloquent testimony that "failure, like success, cannot be measured in absolute terms."

The most detailed book of any battle I have ever read. Being a retired SF Army Sergeant Major I read a lot of military history. A must read , heroic in scope. i could not put it down!