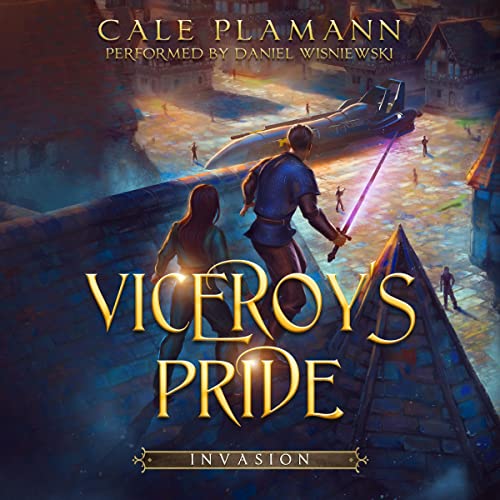 Factional infighting among humanity. Alien invasions ramping up. Only one human with magic.

Dan did everything they told him to do. Shadowy organizations implanted him with experimental nanobots. He went through months of grueling training to learn the skills he would need as Earth’s representative. He learned magic despite the best efforts of ravenous monsters and aliens alike as he survived a hostile planet!

He was still too late. Returning home to a changed planet, Dan found that the elves had already invaded, taking over most of the Amazon and fortifying it against modern incursion. The leaders of humanity are frantically working to put his hard-earned magic into play against the alien occupation.

If he doesn’t want to be just a footnote in the tale of the invasion and enslavement of mankind, it’s time for Dan to stop doing what they tell him...and do what needs to be done.

More action! Surprising twists and turns! MC continues to grow as a person and a mage. It was a great follow on, being on earth and seeing the changes since the MC had left and the slow (forna system apocalypse) introduction of mana to the world via monsters and monster eco systems. Overall, I really enjoyed this book and will certainly be getting the next one whenever it comes out.

Not Worth the Disappointment

The main character ends the first book realizing massive flaws in his character. He decides that he needs to fix them. I am 2hrs in and have given up hope for this series and this author. He doesn't even make it seem like the MC will stand up for anything. He comes back to earth realizing that he let's people walk all over him. What does he do? He let's people shit on him. His psychotic boss? Yep, dude decides to do absolutely insane shit and the MC goes along with it. Random military dude? Yep, let's the man call him weak and simple minded with zero reproach. All of his trainees? Absolutely, he let's them shit on and ignore him. This book series was a waste of time and money.

Okay, so the story picks up a few months after the events of book 1, and well, the mc reverts a little of how he used to be, but that's fine since that type of change takes awhile but oh boy the story really delivers and that epilogue leaves you wanting more

Who are the Bad guysWho are good guys let us see

I liked the first book. Although there were a number of illogical jumps, it was fun and engaging. This second book has been a bit of a disappointment though. it honestly seems like the author is trying to work out emotional issues and past baggage through their writing. The book could have been saved with a good editor, but everything is so protagonist oriented that it takes away from the story instead of making it better. Has great promise but real needs to be fleshed out into a true story and world instead of a lucky one man miracle. (also the elves leave everything unprotected from humans, let alone elves, when they have infighting among each other?? )

Second was as entertaining as the first

Another banger from the author.

Highly recommend you follow Dan and the crew on this journey.

Well done. Well narrated.  will be looking forward to the next in the series. You should buy this book.

This series has so much potential and I fed it shine through sometimes. The story seems to have filler on filler sometimes with scenes just added in for no reason. I understand moving a plot forward, but in the same book the MC will reference something he learned off screen and have a 2 day conversation about literally nothing.

The MC who had a big reveal at the end of the last book apparently forgot all about it. He goes back to earth realizing that he had been a doormat and that he wanted to change. The character had 0 change in attitude and keeps realizing that he is being a door mat and swearing to change it. I have given up hope of his spine being added.

Daniel did a great job and I have no complaints on narration. He gives the same effort for filler as battle content.

This is a solid 3 star story, I gave it a 5 because of the way Amazon does reviews. I will not punish an author.

This was a good addition to the first book in the series. So far I’m very happy with the series and I look forward to book 3 next

Advances the story significantly and was an enjoyable listen, looking forward to listening to more of Daniel Thrush’s adventures.

Both books in the series are brilliant, the story keeps growing. The MC has grown and now fits the roll perfectly. Another series for me to keep an eye out on the release.

Second sequel to the first book and loving where the story is going. Well worth a read / listen

end of book 1 came really good.
but book 2 is the exact same thing just with different names for the same characters... the world's strongest human who knows more than anyone is a massive push over