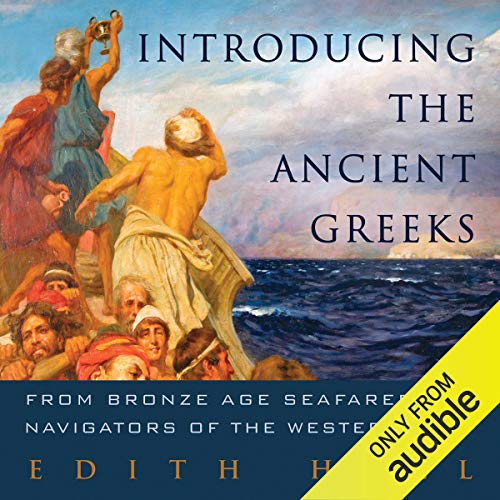 Acclaimed classics scholar Edith Hall's Introducing the Ancient Greeks is the first book to offer a synthesis of the entire ancient Greek experience, from the rise of the Mycenaean kingdoms of the sixteenth century BC to the final victory of Christianity over paganism in AD 391. Each of the ten chapters visits a different Greek community at a different moment during the twenty centuries of ancient Greek history. In the process, the book makes a powerful original argument: A cluster of unique qualities made the Greeks special and made them the right people, at the right time, to take up the baton of human progress.

According to Herodotus, the father of history, what made all Greeks identifiably Greek was their common descent from the same heroes, the way they sacrificed to their gods, their rules of decent behavior, and their beautiful language. Edith Hall argues, however, that their mind-set was just as important as their awe-inspiring achievements. They were rebellious, individualistic, inquisitive, open-minded, witty, rivalrous, admiring of excellence, articulate, and addicted to pleasure. But most important was their continuing identity as mariners, the restless seagoing lifestyle that brought them into contact with ethnically diverse peoples in countless new settlements, and the constant stimulus to technological innovation provided by their intense relationship with the sea.

Expertly researched and elegantly told, Introducing the Ancient Greeks is an indispensable contribution to our understanding of the Greeks.

Hall does a good job introducing her audience to the culture and mindset of the Ancient Greeks without needlessly dwelling on minutia which are better addressed in more detailed examinations (monographs). The narration is clear and a joy to listen to. Well done.

A pleasant and clear narration of this very readable and engaging introduction of Ancient Greece. The writing is sophisticated but accessible. There is a detailed bibliography. One can use this with Edith Hamilton’s The Greek Way. I would advise both agreeable volumes.

This is a terrific book, and a superlative recording. Sian Thomas reads SO beautifully, and Edith Hall writes in a way that is informative, entertaining and evocative. I really didn’t want it to end- and would love Audible to produce many more such triumphs. Treat yourself - this is very, very good.