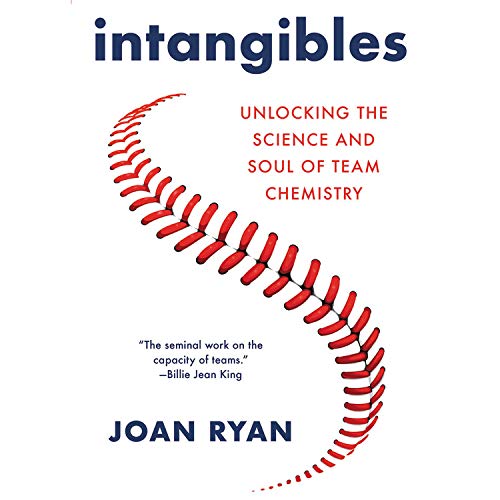 "Team chemistry is real and it impacts performance. Now we know the why and the how. With terrific storytelling and deep research into the science of human relationships, Joan Ryan has delivered the seminal work on the capacity of teams - in sports, business or otherwise - to summon the best from one another.'' (Billie Jean King, founder of the Billie Jean King Leadership Initiative)

"Joan Ryan writes the way we all wish we could: clearly, simply and powerfully, with nothing wasted. Intangibles is a sports book but it's really a mystery. In a time when players are reduced to assets and data, Joan returns the people to the room. How they interact - or don't - is so much of why we watch. This really is a terrific book." (Howard Bryant, author of The Last Hero: A Life of Henry Aaron)

"Team chemistry is no longer valued in baseball today, which is a big mistake. It is crucial for every team; it is critical to winning. Joan Ryan explains what team chemistry actually is and how it affects performance in this fascinating and important book. The voices in here are powerful. This should be required reading for every general manager of every major league team.'' (Tim Kurkjian, senior baseball writer/analyst, ESPN)

From baseball to biology, an award-winning journalist highlights the power of team chemistry in this "terrific" data-driven investigation of human relationships (Billie Jean King).

In Joan Ryan's groundbreaking audiobook, we discover that the answer to all of the above is a resounding "Yes". As Ryan puts it, team chemistry, or the combination of biological and social forces that boosts selfless effort among more players over more days of a season, is what drives sports teams toward a common goal, encouraging the players to be the best versions of themselves. These are the elements of teams that make them "click", the ones that foster trust and respect, and push players to exceed their own potential when they work well together.

Team chemistry alone won't win a World Series, but talent alone won't win it, either. And by interviewing more than 100 players, coaches, managers, and statisticians, as well as more than five years of extensive research in neuroscience, biology, physiology, and psychology, Ryan proves that the social and emotional state of a team does affect performance. Grit, passion, selflessness, and effort matter - but never underestimate the power of chemistry.

This was an incredible book I learned a ton! I highly recommended it to anyone in the sport industry

A fun read into the art rather than science of teams

Thanks Joan for writing this book. The importance of team chemistry brings a lifelong lesson beyond just sports. While statistics have permeated sports and have placed a scientific view of players, the intangibles such as team chemistry mentioned on this book takes a refreshing look at teams and humanizes how we look at them.

Team Chemistry Is Real, and It Matters

Intangibles falls into the rare category sports books that can actually make you a better person. It has the kind of insights about teamwork, leadership, and performance that are useful to anyone that part of a team of any kind (which, one could argue, is everyone).

More than just a collection of sports stories - though it has plenty of those - Intangibles tries to get at the heart of what really makes great teams function. It's not a completist, subject-closing book, but rather a kind of proof that there are worlds of work across many disciplines that still needs to be done on the topic.

Intangibles, along with the also-excellent Captain Class by Sam Walker, are the types of books that you give to someone that you care about and who you want to see succeed. Give it to a young person that's joining a new team. Give it to a slightly older person that just got their first leadership position. It has the kind of direct, real-life applicability that can help benefit them - and you - in tangible ways. (And, if you're anything like me, it'll really make you regret a few times when you might have been a bad teammate, lol.)

Also, as a smaller note, Ryan is an excellent reader as well, and she makes a case for why it's good to have authors read their own work. She injects her narration with the kind of humor and character that an actor just couldn't authentically replicate.