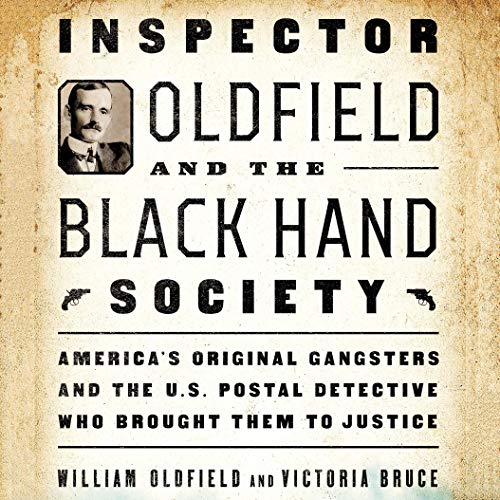 The incredible true story of the US Post Office Inspector who took down the deadly Black Hand, a turn-of-the-century Italian-American secret society that preyed on immigrants across America’s industrial heartland - featuring fascinating and never-before-seen documents and photos from the Oldfield family’s private collection.

Before the emergence of prohibition-era gangsters like Al Capone and Lucky Luciano, there was the Black Hand: an early 20th-century Sicilian-American crime ring that preyed on immigrants from the old country. In those days, the FBI was in its infancy, and local law enforcement were clueless against the dangers - most refused to believe that organized crime existed. Terrorized victims rarely spoke out, and the criminals ruled with terror - until Inspector Frank Oldfield came along.

In 1899, Oldfield became America’s 156th Post Office Inspector - joining the ranks of the most powerful federal law enforcement agents in the country. Based in Columbus, Ohio, the unconventional Oldfield brilliantly took down train robbers, murderers, and embezzlers from Ohio to New York to Maryland. Oldfield was finally able to penetrate the dreaded Black Hand when a tip-off put him onto the most epic investigation of his career, culminating in the 1909 capture of 16 mafiosos in a case that spanned four states, two continents - and ended in the first international organized crime conviction in the country.

Hidden away by the Oldfield family for 100 years and covered-up by rival factions in the early 20th century Post Office Department, this incredible true story out of America’s turn-of-the-century heartland will captivate all lovers of history and true crime.

On its face, the story of moderately corrupt civil servant taking aim at serious criminals (albeit through rather mundane means) ought to be an interesting story. The problem is that it seems the author's intent is to restore his great grandfather's good name rather than to tell a warts-and-all story. Years of political cronyism and "infractions" are touched upon, but only in passing (which for me, puts Oldfield's true involvement in later sketchy deals into question). At best, Oldfield was an interesting cog in the machinery that fought the Black Hand, mostly as a government functionary. The Stephen Talty book "The Black Hand" is a much better book detailing the workings of, and efforts to bring down, the secret society. The performance was generally good, however the very deliberate pronunciation of the word "penitentiary" with 6 syllables (though I'm not sure if it's strictly incorrect) was rather distracting, as the word is used at least a dozen times.