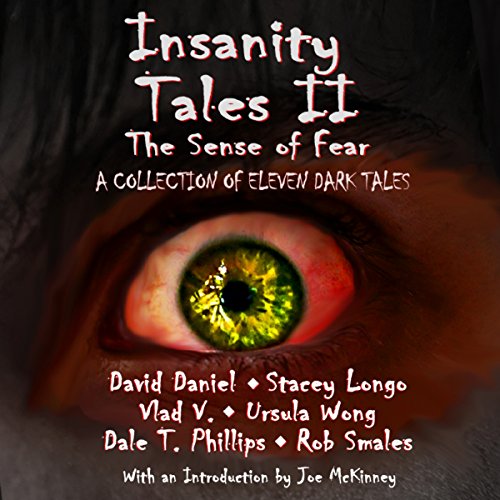 Reality slides into madness again in these eleven tales from some of New England's finest storytellers. Feel your heartbeat quicken as your senses drift to dark places: the howls of horror, terrifying visions, a hint of mystery in the air, and the bitter taste of death. You may never sleep with the lights off again.

This is a great set of short stories! I wouldn't consider them all horror, but dark fiction for sure. There were a couple that were just ok, but most of them kept my interest. One great thing about this book is that you can read one story every day or on a lunch break and not have to remember where you left off. Fred did another fabulous job narrating this book! There were multiple types of voices and accents in the stories and he handled it wonderfully!

Narrator does disservice to authors and stories

So I have to say this is the first audible audio book I didn't finish and it was completely due to the narrator. I don't consider myself picky, you don't have to come across like James Ear Jones for me to enjoy a story reading. There is something with high pitch and how he strongly emphasized the end of each sentence that completely threw me out of the story itself. Sadly I can't give a review on the quality of the writing as I gave up about halfway through the first story, but it seemed to start off well. A complete waste of a credit, will never buy another book narrated by Mr. Wolinsky again.

I loved this story but the narrator ruined it. Flat dropping drawl, which sounds like the words themselves were running for cover. Shame, overall a fantastic story by a fantastic writer. I would recommend the book only if you get rid of this narrator and get a top notch narrator whose voice will do this story proud!

This collection ranges from the humorous to the vengeful to the brutal to the calculated deadly. There’s vomiting demons, cheating spouses, serial killings, back-room justice, despair and sadness, innocent madness, and a post-apocalyptic deadly obstacle course. I really enjoyed the first Insanity Tales anthology but I think this one is a bit more diverse. My three favorites from this collection were Hooks, Spirit in the Stone, and The Devil’s in the Details, though Rape Kit deserves a worthy mention.

Ed’s at a bar on a Thursday night about to head home. Normally he stays overnight in the city on Thursdays so he can get an early start at work on Friday and be home early for a long weekend. But it looks like snow is in the air and folks are hoping for a snow day. Liam, the bar tender, brings up the age-old question of whether size matters or not. Ed tells Liam a story about his grade school days: Susan liked to collect baseball cards –the more the better. Each individual one doesn’t matter. The size of her collection was what mattered to her. This story started off pretty innocently, letting me get all cozy within the telling, leading me by the hand down some dark alley of infidelity, handguns, and fancy lingerie. This was a good start to the anthology, getting the audience warmed up. And, yes, I did indeed like the running cliche of ‘size matters…. or not’ throughout the story. 5/5

The Book of Shadows by Rob Smales

James had his eyes operated on in his teen years, returning his sight. Now he lives out in the wilderness. A reporter, Carl, has tracked him down and wants a story about the serial killings. At first, James refuses to chat with him but Carl makes a strong argument for how he’ll get his story one way or the other. So James tells him his tale of how it all started, how he learned to interpret the shadows, and how it all went horribly wrong. Since the tale is told from the standpoint of the main character, I never questioned whether or not he was telling the truth about the shadows and his level of involvement in the deaths. Then we get to the ending and I have to wonder. James’s disturbed emotions over the foreshadowing shadows was quite clear and his horror, even terror at times, and eventual despair comes through clearly. 4/5

The story starts off with Chase Davis and his friend Marty at Rebecca’s graveside. Marty’s wife, Rebecca, was having an affair with Chase, who had wanted to call it off due to boredom but Rebecca was clingy. Marty misses her terribly and Chase is determined to keep his little secret so as not to devastate his best friend further. Yet Marty is certain he can find a way to communicate with the dead. All through this story I kept waiting for the other shoe to drop. Perhaps Marty knew about the affair all along or found out shortly after the funeral and now he wants to pull an elaborate, demented joke on Chase. However, there never is another shoe to drop. The story had a strong set up and then a whirlwind ending. In fact, I felt the ending was rather abrupt. 3/5

Nobody Ever Listens to Eddie by Stacey Longo

Eddie believes he has been psychic since he was a kid – his sister’s bike accident, his dad’s car, vomiting on the priest, that toad. So today is a big festive day and he has the worst feeling ever about the day. However, he’s reluctant to tell anyone about it. His sister Bev always finds a logical way to explain away his bad feeling. His wife Norma left him because of it as well. Will Eddie listen to his feelings today or finally set aside that side of him and try to have a normal day at the festivities? This was a fun, short piece. 4/5

Spirit in the Stone by Ursula Wong

This story flashes back and forth between the present (she’s spreading Joe’s ashes in the desert) and their past few years together. She’s always been a bit sad, but one day she meets Joe in a diner and they hit it off. He likes having someone to take care of and she likes being taken care of. Unfortunately, Joe gets sick. During the last days of his life he goes a little nuts and accuses her of poisoning him, of killing his 3rd grade teacher, etc. As she’s spreading his ashes, she finds some petroglyphs. She vaguely recalls a story that said spirits return to the rocks once their body passes. I really enjoyed this one. A bit mystical and yet everything can be explained by human nature. 5/5

On a small campus in Pennsylvania, a 65 year old campus cop coordinates with his newest recruit, Roland, in dealing with the accusation of rape. They’ve taken care of all the immediate stuff and are waiting for the state police to show up. The old cop starts telling Roland stories of how such things were handled in the past prior to rape kits and forensic evidence. Plenty of food for thought in this one while dealing with a tough subject. 5/5

The Perfect Game by Rob Smales

Jimmy has been eagerly waiting for Joe and Charlie to return from their adventures in England. Joe shows up but he doesn’t look too good. Charlie still at Logan airport, waiting to be claimed by a family member. Joe tells Jimmy the lengthy story about a game of darts while they were in England and how it all went wrong. The dart game part took up the bulk of the story and I found it a bit boring. The surprise ending was a nice twist. 3.5/5

Mr. Burrows lost his hands to an IED and now he has hooks. He feels they set him apart from society and he hates it. Even when people are kind, like giving him a free breakfast or such, he hates that too. One day he meets a nice lady and they spend hours talking before he reveals his hooks. She still likes him but is busy with school for a few weeks. He thinks she’s just letting him down easy. The story takes a much darker turn, showing how important (and perhaps deadly) it can be to self-identify as a predator instead of prey. I loved this one. It shined an eerie light on how disabled veterans are treated, even by well meaning folks, and a light on what those veterans might think of such pity. 5/5

The Devil’s in the Details by Stacey Longo

Tiffany is having a sleep-over at her house for her birthday. She’s invited the twins (Gretchen and Gerda), Allison (grammatical queen), and Julie. Tiffany received a Ouija board for her birthday and of course the girls have to try it out. Unfortunately, one of them makes the mistake of jokingly inviting a spirit to possess her body. Things change for her after that; some good, some bad. This one was quite fun and a bit light-hearted compared to the rest of the collection. It was cute and fun. I can see it as a start to a YA urban fantasy series. 5/5

Fly Away by Ursula Wong

Danny does his best to explain to his girlfriend Alice about his older sister Vega. She’s different and has spent the last several years at the Hampstead Home. Vega’s old room is full of ceramic birds, most in crazy colors. Now Vega is due to return home and Danny wants to meet her alone and introduce Alice a little later. But is reconnecting with Vega on the isolated farm really the best choice for Danny? This story started off strong. I like all the creepy bird imagery. The ending is a little abrupt and I could see it coming from the beginning. 4/5

This is a nitty, gritty, grimy, and sometimes slimy story. Set in the post-apocalyptic ruins of a large city (New Carthage), there’s still crime lords. Al Brunichelli wants his sister Adelina to at least marry an equal if not a little higher, perhaps allying his own crime organization with rival gang. Alas, Adelina has her eyes (and other body parts) set on Hector. He’s a low-level runner, and his skin isn’t white enough for Al. But they strike a deal. The biggest holiday of the year is coming up and that means the deadly float race is nearly upon them as well. Hector wants a float, and if he wins, then he gets Adelina. The float race is kind of like the thunderdome on big rubber water floats. There’s dirty tricks right, left, and center, and Hector has to figure a way through or under or over all of them. The competition is fierce and Al just might have added some extra dangers for Hector. I started off really liking this and it ended OK. I like the gritty feel to it and the dangerous float ride. However, there is only 1 woman and she is a prize to be won and she’s OK with that (a rather tired cliche). 4/5

I received a copy of this book at no cost (from the narrator) in exchange for an honest review.

Narration: Fred Wolinsky did a really good job with this collection. In Spirit in the Stone, Wolinsky does a great job narrating the entire thing in a feminine voice. In Snow Day, Wolinsky had a little trouble with Liam’s Irish accent, but that’s my only negative comment on the narration. In The Devil’s in the Details, Wolinsky using special demon voice (gravelly) when the demon speaks and then he gave the voice a hollow echo for when the demon was speaking to his host in her own head.