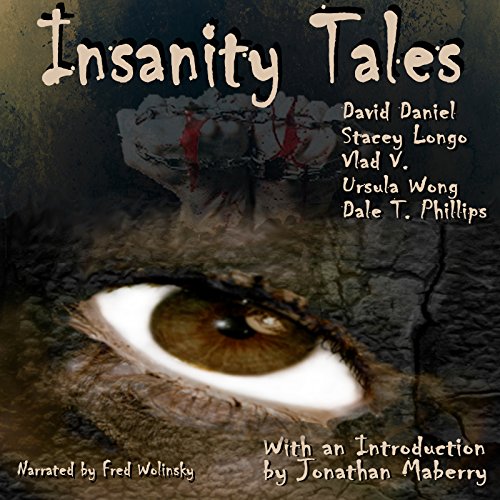 Enter a world of insanity as you encounter nine tales of murder, mayhem, and madness from authors David Daniel, Stacey Longo, Dale T. Phillips, Vlad V., and Ursula Wong. Here you will find twisted psyches, peculiar people, and demons of the mind and spirit. If you like your stories dark and scary, come take a stroll through this asylum, hearing ominous whispers or the shrieks of the unhinged echoing in your ears. You'll find yourself glancing nervously over your shoulder, or wondering about that odd-looking person at the bus stop - or even in the mirror. Come in, enjoy the trip, but step carefully, and watch the shadows, for you may never be the same again.

Five writers have come together with 9 tales in this anthology. Foreword is by Jonathan Mayberry. Contributing authors are: David Daniel, Ursula Wong, Dale T. Phillips, Stacy Longo, and Vlad V.

By and large this collection of spooky stories had the flavor of the Twilight Zone stories – where much of the story seems normal, every day. But as the reader explores each story deeper, they learn that all is not as normal or pleasant as it seemed at first glance. And I feel that is what made this a greet collection of tales – really, these tales could be going on right now in my neighborhood. The characters were average people on the surface, folks you would great over coffee or perhaps work with. But any one of them could be a little off, a little insane on the inside. I quite enjoyed Scalper, Chupacabra Moon, and The Sleep Artist.

Dark Water by Ursula Wong – Four friends (Vicky, Jane, Emile, Peter) decide to take a small vacation together staying at a place that has a natural pond. One member believes the pond is haunted as it forces her to delve into her memories of a rape sustained some time back. This one was disturbing for plenty of reasons!

Jack O’Lantern by Dale T. Phillips – Jacqueline (Jae) has had to recently move to Iowa. She’s having trouble fitting in, no one likes the nickname she’s given herself, and there is a very spooky scarecrow out in the field. Of course no one believes her about how spooky the scarecrow is and that comes back to bite them in the bum.

Old Man Winter by Stacy Longo – We first meet the Old Man when he is perhaps 6 years old. His little sister, Patsy, has recently been born and he is none too pleased. He wants her gone and devises ways during play to make that happen. As the story moves forward, we are treated the Old Man’s life and all those he eliminates. The ending to this tale was very satisfying.

Scalper by David Daniel – Vick Dempsey meets the Scalper at a hockey game, where the Scalper is selling tickets. But he doesn’t just have tickets to sports events. He also sells tickets to various kinds of violence. At first Vick is merely intrigued and even slightly disgusted. But as he goes to one event after another, his interest grows. Can things possibly go too far? The ending was left up to the reader’s interpretation. I think the Scalper would make an interesting character for a series.

Never Alone by Ursula Wong – Raymond was small boy, living on a farm, who died from falling from a hayloft. Most of the story is centered on him after this tragic accident as he continues to haunt the house. I felt it was an interesting beginning and I would have liked to read more of Raymond’s story. The tale felt incomplete.

Chupacabra Moon by Dale T. Phillips – Katherine has a facial scar from a tragic accident and this adds to her social anxiety. She feels that people see the scar and not her, are interested in the scar and the tragic tale, and not her. Then she meets Jarred, who is a photographer. They have a whirlwind romance and Jarred gets a photography assignment in Mexico. He is to photograph the native traditions concerning the chupacabra. His true nature comes out to Katherine during this trip and she doesn’t like what she sees. Katherine turned out to be a very practical woman and I quite enjoyed this tale.

Color Him Crazy by Stacy Longo – Jesse, Bartles, & Edda are siblings. The story is told through Bart’s eyes. His older brother, Jesse, is a convicted serial killer. Meanwhile Edda is on trial for killing and eating her boyfriend. Bart feels he is the only normal one of the three, but small things are revealed about his personal life as the story goes forward. The author was having a joke with the three names, but I didn’t really get these jokes. I believe Bartles was named after a wine cooler. I am not sure what joke surrounds Jesse. Apparently Edda’s name coupled with her last name referred to some singer or gangster’s girlfriend or such. I totally did not recognize the name or reference when the joke was explained. This left me feeling a bit stupid and kept kicking me out of the story as I pondered the jokes. Over all, I liked the main story.

The Sleep Artist by Vlad V. – Baby Miguel is not sleeping well and his parents have tried everything they can think of – home remedies, doctors, prayer. Now they have turned to Wanda who is a Sleep Artist. There’s only a few like her left and they are spread thin. She has been doing this a long, long time and is one of the best. She is a demon hunter and she believes that baby Miguel is inhabited by a demon (Shardok?). As Wanda sets her crystals and safety circles and enters the dreams of Miguel, a battle of wits and cunning ensues between the demon and Wanda. They travel through memories and time, going three rounds. The story started off solid and then veered to the 1920s prohibition and a speak easy and a touch of erotica. This section was written well, but at first I was not sure what was going on. Luckily, this story is long enough to tie it all together and not leave the reader feeling like they missed something. The ending was not what I was expecting and I quite enjoyed this story.

Narration: Fred Wolinsky did a pretty good job. I have listened to several of his audiobooks by now. He had distinct voices for male and female characters and a range that allowed each story to be distinct. He injected the tales with drama and emotion and often I was quite lost in the story. My one quibble is that sometimes his female voices sounded like cartoon children instead of full grown women. At other times, he quite nailed it giving me a believable adult female.

What I Liked: A very interesting collection; several of the stories had unexpected endings; they varied in length.

What I Disliked: One of the tales had an inside joke concerning the characters names that left me feeling stupid; occasionally, an adult female would sound more like a cartoon kid than a full grown woman.

Would you listen to Insanity Tales again? Why?

Yes - especially since this is a book of short stories, I can listen to my favorites again and again. Also, since they had surprises, it would be fun to hear them again, and see if I can pick up more nuances along the way.

He has a very natural and easy-to-listen to voice with just the right amount of emotion and drama to the narration. He is also excellent at characters -- male and female -- creating an appropriate and identifiable voice and personality for each one -- from a craggy old lady with the beginnings of dementia, to a middle-aged businessman, to a young tough girl, to a bitter old man, to a shy young woman, to a Mexican man, to a powerful female psychic to the devil himself. He brought each to life!

If you could rename Insanity Tales, what would you call it?

This is an enjoyable anthology from 5 gifted authors. Each story is a different style, which makes it especially fun. They all had their twists and surprises; some were more predictable than others, but that didn't make them less enjoyable. I had my favorites, and I am sure other people will have theirs, but they were all entertaining to listen to. Some were more comic, others more disturbing, and others just spooky. It was also nice hearing the endorsement introduction by Jonathan Maberry. Give this book a try!

I love the short stories in this book. It's a good mix of creepy and good old horror with a little humor in some of the stories. If you don't want to commit to a full novel, this is a great selection of short stories and only a quick 4 hour listen. The narrator did a fabulous job with this book. He is easy to understand and does a wonderful job with all of the different voices and accents!!

I love Jonathan Maberry, and saw that he wrote the introduction to this book, so I had to give it a listen. I was not disappointed. There are 9 horror stories of all different styles -- some disturbing, some creepy, some funny -- but all enjoyable, and nice to have the variety. I especially liked many of the unexpected twists. I will be looking for more from these authors.The narrator’s skills matched the diversity of the stories. He was able to present a wide range of styles, accents, and voices, each befitting the story. His voice was clear and easy to listen to. This is a great book for Halloween or any time of the year.

Stories were interesting but narration lacking

I would recommend the print version of INSANITY TALES, but was not impressed with the narration of the audiobook version.

The most interesting aspect of these stories were the unpredictability. I enjoyed the way everyday events ended up twisted into insanity.

See my comments below

* i received a free copy of this audiobook in exchange for an honest review.

This is a collection of nine tales that deal with the depravities of the human mind.

People have been fascinated throughout history by other people's aberrant behavior. This collection of stories caters to that fascination.

These are stories of murder, mayhem and madness.

From an old lady looking back on her life through a fog of Alzheimer's to a young girl who is forced to move to an entirely new state and her grim discovery, these stories will grab and hold the listener's attention.

The narrator does a good job for some of the stories, but I found the voice he used for the little girl in the third story to be very annoying. It was too high pitched and just did not seem realistic. He narrates male voices well, but his female voices leave a lot to be desired. I have never met a woman or a girl who sounded the way they are voiced in this collection. His voice is perfect for some stories and for others it is completely unsuitable. For these stories it would have been better to have separate narrators.

Avoid at all costs

I don't understand the positive reviews. I think someone must be stuffing the ballot. I bought this based on a 4+ star rating, so this is frustrating.

All of the stories were amateurish and awful. Nothing was scary. No characters said or did anything that made sense. The narrator was offensive when doing lady's voices and Spanish accents.

Avoid at all costs. Awful, awful waste of my time and money.