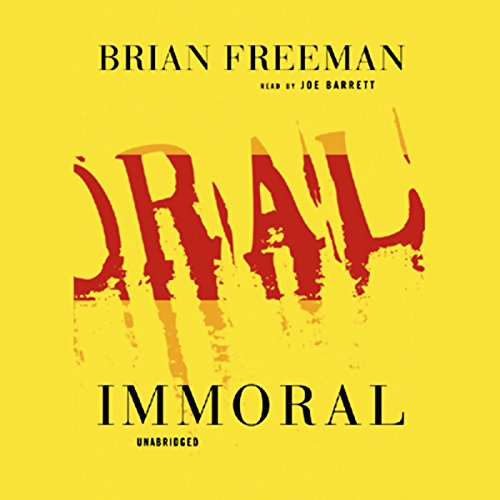 "Who is Brian Freeman? This guy can tell a story. Immoral is a page-turner of the highest caliber. It has enough twists and turns to keep you guessing until the end." (Michael Connelly)

In a riveting debut thriller that has drawn comparisons to masters of the genre like Dennis Lehane and Michael Connelly, Brian Freeman weaves obsession, sex, and revenge into a story that grips the reader with vivid characters and shocking plot twists from the first minute to the last.

Lieutenant Jonathan Stride is suffering from an ugly case of deja vu. For the second time in a year, a beautiful teenage girl has disappeared off the streets of Duluth, Minnesota, gone without a trace, like a bitter gust off Lake Superior. The two victims couldn't be more different. First it was Kerry McGrath, bubbly, sweet 16. And now Rachel Deese, strange, sexually charged, a wild child. The media hounds Stride to catch a serial killer, and as the search carries him from the icy stillness of the northern woods to the erotic heat of Las Vegas, he must decide which facts are real and which are illusions. And Stride finds his own life changed forever by the secrets he uncovers. Secrets that stretch across time in a web of lies, death, and illicit desire. Secrets that are chillingly immoral.

This is the first book in the Minnesota Detective Jonathan Stride series. Rachael, a teenage age girl, has gone missing, and all the circumstantial evidence seems to point to murder. Though another teen girl went missing a year earlier, Stride and his partner, Maggie Bei, don't see any connection between the two girls disappearances. Unfortunately, Rachael seems to be a sexual tease, with no compassion for anyone. There is no body, but Stride and Maggie have found enough evidence of a murder to go to trial. Once in court, things begin to fall apart. More information about Rachael's background adds suggestions of greater intrigue to come.

I really enjoyed the developing turns and twists with this book, though the unnecessary overly explicit sex scenes were overdone for me, and really detracted from the building suspense. I'll definitely be giving this series another try, hoping it will be kept within the mystery genre, without spilling over into too much into erotica.

Yes, I enjoyed the story. It was a good mystery that was well paced, driving the story to its conclusion.

I thought the ending could have been a lot better. There's no need to make all of the major events be tied directly to the main character.

Which character – as performed by Joe Barrett – was your favorite?

He did the male characters well. His female voices were very weirdly done.

There were a lot of graphic sex scenes that were unnecessary to move the story along and honestly, they were clumsy. He would bounce between proper names for body parts followed by some pretty base slang. It was the kind of sex a 16 year old boy might write and there were far too many of them. More than anything else, this reduced my enjoyment of the story because implied sex would have served the story just as well and we wouldn't have been forced to listen to the narrator struggle through poorly written sex scenes.

Immoral is a superb mystery that readers will certainly enjoy. Its elements of a fast pace, myriad twists and unforeseen turns, great character development, and suspense make it hard to stop listening. This book had me gripped to the point that I lost sleep because I had to get to the end. This is a story you will want to tell your friends about. Brian Freeman is an excellent author and I look forward to his next book.

I can see why the reviewers were impressed with this debut novel. The characters are quite good. The depiction of the small town seems very real. And the plot is full of intricate twists and surprises that somehow make sense. The ending, I thought, was the best part. I am usually able to figure out the mystery ahead of time. In this case, I "saw it" almost at the same time as our protagonist, detective Stride. I disagree with the reviewer who said we did not have the evidence -- we did! Mr. Freeman was simply great at disguising it so you didn't even look in those particular corners.

Every character is incompetent and has the emotional maturity of an eleven your old. All the women characters are thoroughly described as sex objects. I have no idea what any of the male characters look like but I know they’re all horn dogs, even female cops looking at pictures of dead teenagers. The narration was ok but the Minnesota accents were distracting.

I read some of the earlier reviews and shyed away from this one until I ran out of Brian freeman books - So I went backwards to this one and was very glad I did. It was a little graphic & disturbing at times - But I am an adult, so I enjoyed it for what it was. If I wanted G rated - I'd grab one of my kid's books. I love barrett as a narrator and Freeman is always so close to perfect with his books. There is always one or two parts that I shake my head at - But overall - He's pretty darn good. I actually think this book might be one of his best.

Immoral is an outstanding mystery filled with rich character development and relationship dynamics. The plot never lets the reader down & one's interest is held through the last page. Brian Freeman is an excellent author & I eagerly await his next novel.

I purchased this book on sale and I am so glad i found this new author. It is always a hoot to find a first time effort to be this good and one looks forward to further efforts from Mr. Freeman's pen.

The story has been detailed by others and all I will say about it is that I defy you to figure it out before the author finally reveals all of the twists and turns that he has woven into the fabric of his text. Jonathan Stride is likely to be around for a while and I suspect that Serena Dial will be also. Freeman does not create subtle characters. They live hard, love hard and many of them die hard.

It was also hard to put this book down because it moves along at a steady pace and there are no easy resting points. A most promising debut!

Joe Barrett was excellent with the delivery of the story

I'm really glad Brian Freeman's first read made a good impression on me, as now I'm sure I'll read them all. He's a good writer, never repetitive and writes good dialogue. He draws his characters well; some you'll like and others you won't. Perhaps in this book most of them I didn't. There was a good deal of suspense right from the very first page of the prologue where I was hooked immediately. The story then developed in an interesting way and then the twists and turns started in the second half and I was left upside down not knowing what would come next. I cannot help thinking, though, it would have even been better with a really good narrator. Having said than, Joe Barrett is OK, but, in my opinion only rates 3 stars. Apart from that, this is a very well woven book full of surprises right to the end; A thoroughly enjoying listening read and highly recommended.

Immoral Is An Apt Title

This is an okay book, but it gets lost in the side plots a couple of times and even decides to introduce a new set of characters and locations more than halfway through the book, which I seldom find to be a good sign. You can find prime examples of at least six of the seven deadly sins here, missing only gluttony. We have people committing murder, kidnapping, rape, adultery in several forms including with their "minister", their stepdaughter, and their coworkers. There is a woman that pulls the getting pregnant trick twice to force men to marry and take care of her. Lust, envy, wrath, and pride run rampant. Lots of misdirection and lapses in logic to annoy those that like their books to make some sort of imperical sense mean slight deductions to the overall score.

This is an okay story and the good reader make this worth purchasing. Do NOT listen to it on the car radio with young listeners or unrelated members of the opposite sex in the car. There are some rather graphic scenes of a sexual nature that would embarrass those with a semi developed sense of morality.

An enjoyable debut novel with enough twists to keep the pace going nicely. Can't say too much without giving away the plot, but I'm not sure it's completely credible at the end. However, it zips along and, as it says in the blurb, if you like Michael Conelly, you'll probably not be disappointed if you download this one.

This was a real 'find' in Audible and if Brian Freeman can keep up this standard of thriller, Michael Connelly certainly has a rival as my favourite. I should also like to say I enjoyed the reader whom I had not heard before; some can really spoil a very good story but this reader was spot on.

This book was my first Brain Freeman listen and I will be looking for more. The plot was interesting and some of the turns were quite unexpected. It moved along at a pace which kept me listening and engaged with the characters. The narration was unobtrusive and suitable for this book. Highly recommend to anyone who likes a good crime novel.

What a good book

If you like thrillers, with twists then this one is for you. Well read it keeps you interested throughout, and just when you think you've worked it out, the plot corkscrews off taking you to a whole new place. Then eventually just when you think that the author has forgotten a loose end everything is answered. There is a major location shift in the middle of the story which totally threw me as initially I thought that the download had gone wrong, but in the words of Oasis you need to "roll with it". Very well read with good characterisation, thoroughly recommended - I am saving the second book in the series for my upcoming holiday in Greece - can't wait.

sex scene on the porch

great in parts but too much irrelevant fillers

I didn't guess this one!

Yes. My first crime read and I loved it. Twists and turns. Couldn't stop listening to it.. Would prefer English story teller.

I gave it full marks for being a light and entertaining read!And sometimes that's what hits the spot!

I really enjoyed the book, a great storyline, the only criticism I would have is the fact a person was allowed to get away with murder. I cannot take that in, regardless of the reasons. I will try Book 2.