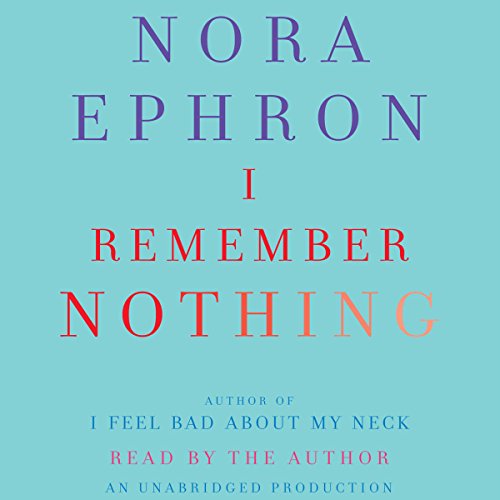 Nora Ephron returns with her first book since the astounding success of I Feel Bad About My Neck, taking a cold, hard, hilarious look at the past, the present, and the future, bemoaning the vicissitudes of modern life, and recalling with her signature clarity and wisdom everything she hasn’t (yet) forgotten.

Even as she’s listing “What I Won’t Miss” and “What I Will Miss” - making the final tally - Ephron reaches back to recount falling hard for a way of life (“Journalism: A Love Story”) and breaking up even harder with the men in her life (“The D Word”), a long-anticipated inheritance with entirely unanticipated results (“My Life as an Heiress”), and the evolution, a decade after she wrote and directed You’ve Got Mail, of her relationship with her in-box (“The Six Stages of E- mail”). All the while, she gives candid, charming voice to everything women who have reached a certain age have been thinking... but have rarely acknowledged.

Filled with insights and observations that instantly ring true - and could have come only from Nora Ephron - I Remember Nothing is a pure delight.

I am so tired of publishers claiming that a book is hilarious. This one is not hilarious, but is much more. Whenever I am exposed to Nora Ephron, I am entertained by the way her mind works and the way she can express life’s nuances – sometimes saying just what I would have said if I were brilliant. I enjoy her juxtapositions: opinionated self-doubt, funny terror. I always gain a couple of insights into myself and the way people work. I really enjoyed this read. And, like I Hate My Neck, it seeds in just enough reality to make one’s heart stop.

I highly recommend this audiobook. One of my favorite movies is the 1990 comedy, ???My Blue Heaven,??? screenplay by Nora Ephron, directed by Herbert Ross, and starring Steve Martin, Rick Moranis, and Joan Cusack. The title of this inspired movie was taken from the old Fats Domino song by the same name. You probably heard that Ephron died of leukemia on June 26. Her death at seventy-one surprised even her friends.
When a celebrity dies, friends, family, or acquaintances appear, saying obligatory positive things about the deceased. Who pays attention to obligatory utterances? It???s the body of work left behind that matters. Besides my favorite movie, Ephron wrote: When Harry Met Sally, Sleepless in Seattle, You???ve Got Mail, Julie and Julia, other movies, books, and even a play, which she considered her best writing. Still, a television interview of a friend and several columns by journalists who mentioned knowing her intrigued me, and created the impression that Ephron didn???t prepare people for her death. One columnist, who never writes a sentimental word, as far as I can tell, wrote about riding in a cab in Texas, the day after Ephron died. The cab driver swerved to avoid an accident, throwing the columnist into the back of the front seat, and she burst into tears, scaring the bejeebers out of the cab driver. The physical jolt released a flood of grief. What kind of woman is known for being a great friend adored by many, including hard-nosed journalists, but allots no time for saying good-bye? I was skeptical, and wanted to know more. Did I say I???m a psychologist?
Unfamiliar with Ephron???s essays and books, I decided to search for something to read, but picked an audio version of I Remember Nothing. Great decision on my part because Ephron reads it. The material is funny and the delivery is perfect. She discusses aging, family relationships, friendships, divorce, work, lists of things she liked and didn???t like, people (neither Tom Friedman nor Larry King come out ahead), successes and failures, food, and more.
Nora Ephron loved being a journalist and this book is a credit to the field. She mastered the art of including facts about flawed people, aren???t we all, that humanized them without ridicule. Her mother became an alcoholic when Ephron was fifteen. It???s so easy to trash a parent, and so not the thing to do. She tiptoed along a very fine line and captured the best and worst of her mother, with a detachment that allows the listener to hear without cringing. This book is devoid of bitterness and filled with insight. Her philosophy was ???get over it.??? Maybe this audio book was her way of saying good-bye.

I enjoyed every moment, and, because I also remember nothing, have had the pleasure of enjoying in over and over like it was the first time. Funny, self-deprecating, and full of sharply drawn remembrances of her remarkable career, as well as the back stories that make it seem like you've just had the most delightful chat with an old friend.

I really like Nora Ephron and was genuinely upset when she passed away.
Her writing style is so sharp and clever, but also poignant with a hint of sadness.

I listened to this as an Audible.com audio book narrated by the author which I really enjoyed. I think wherever possible the author should narrate, especially in cases of essays and memoirs, it just makes the experience more genuine and touching.

This was particularly touching as she discussed aging, disease, divorce and death and shared her thoughts on how they impacted her life and her self image. She still managed to make it fun though, which is something I love Nora for.

I love this woman! If more people reflected life this way, the world would be much better off a larger cinco of the time. High five to Nora!

This book is funny , entertaining and insightful! I will be listening to this one again.

New to Ephron. What humor, what poignance. Marvelous to hear her words in her own voice. Wisdom for all.

I adored the book. Narrator is perfection. I’m sharing this beautiful gift with my besties♥️

I love Nora Ephron. Particularly her musings on daily life. She makes me laugh and she makes me sad in a 'this is life' sort of way. Highly recommend.

Listening to this book was a much needed distraction from so much bad news constantly coming our way. It helps to balance all that heaviness with Nora’s unique and honest storytelling and humor. This book was just what I needed to lighten my load. Made me miss Nora’s magical talents. There will never be another Nora!

A memoir from a great cultural figure

Where does I Remember Nothing rank among all the audiobooks you’ve listened to so far?

This is one of the best memoirs I've listened to.

It's so nice to hear this spoken by Norah Ephron herself. I wish there were more.

Wit and punky advice from Nora

Would you consider the audio edition of I Remember Nothing to be better than the print version?

Because this is spoken by Nora herself you really feel engulfed in her very funny company. I couldnt imagine reading this book now. I felt bereft when it ended and I found out she had passed away so this book is a one off.

While I walk my dog!

I took charge of my friend's dog while she (friend) went winter sporting, and consequently had dog-walking duties in the snow frosted park. While I loved watching her bounding and singularly failing to retrieve any of the sticks I pathetically lobbed for her, I found myself getting bored. Enter Nora Ephron's 'I Remember Nothing'. Problem solved. This is such a dry, funny treat for all of us that are entering the days of the silver surfers. I recognised, and shared, so many of her irritations and musings.It was a complete joy from start to finish. I couldn't even begin to list my favourite bits. I am now about to order her other writings from Amazon - a pity there aren't more on Audible to speed my walk round Greenwich Park! Recommended!

i devoured this one in a sitting. Really very funny, wise and original. I would highly recommend to anyone looking for a light bite sized listen!

This is a fun book to listen to, I was glad I bought it. I want to read or hear her other books.

Some very funny and interesting stories but even though it was the author reading her own work it didn't particularly flow well. Would have been better off reading it myself.

From start to finish Nora's words and her dry wit were spectacular! I hope I'm half as humourous and inciteful when I find my existential crisis in ageing!

What made the experience of listening to I Remember Nothing the most enjoyable?

I found this incredibly moving, written as it was just before Nora died. Her gravelly, ageing voice is full of wisdom and humour, and completely made this book for me. The topics range from forgetfulness to musings on how her life might have turned out differently. I found myself in tears at the end of one story about how she came to write When Harry Met Sally by failing to inherit a fortune. Nora may not have got he tidy sum, but we're all the richer for it. A must for anyone who loves memoir or the work of this great American writer.

What was one of the most memorable moments of I Remember Nothing?

The funny and wonderful story, My Life as an Heiress

What does Nora Ephron bring to the story that you wouldn’t experience if you had only read the book?

Picking up on the cadences of the sentences, as spoken by the author.

It put a lump in my throat the whole way through. But in a joyous way.

I devoured this in one sitting, this was an absolute pleasure to listen to. More please Nora!

Loved it, wish there was more

Wish there was more!

Why must I put 16 words in before you will submit my review? I loved it!

Would you listen to I Remember Nothing again? Why?

I have listened to this book about 7 or 8 times

Nora always makes me feel she is sitting across the table, it feels as though we are friends

Not necessarily but can hardly stop myself

I am sad there won't be any more

Love Nora so much

Get this one if you love Nora Ephron. She reads it herself. Some of the later pieces will bring tears to your eyes knowing she only survived 2 years after this was made. A very funny woman. A great loss. Her observations are filled with her wit, her compassion, and her stunning sense of the ridiculous. Loved it.

Nora was right about almost everything, but she's probably laughing about it now. Needy thing wants more words. There. Xxxxx