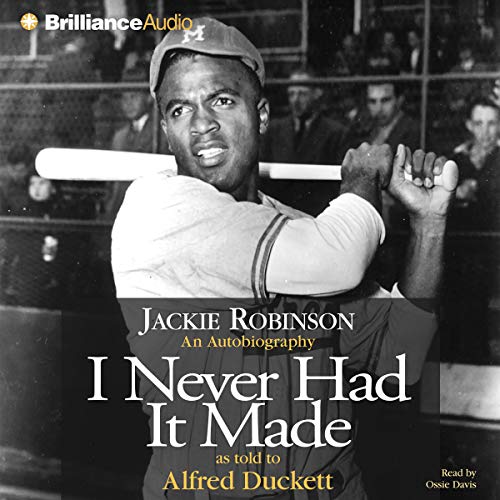 "A disturbing and enlightening self-portrait by one of America's genuine heroes." ( Publishers Weekly)

A straightforward yet inspiring story of what it took to be the first man of color to break into the white world of professional sports. Jackie Robinson's story is more than a telling of his tremendous talent; it is also a recollection that showcases his tenacious spirit, bravery, and the courage of his ideals.

From the early influences of family and friends, to his time at UCLA, to the Army, where he challenged racism and Jim Crow laws, Jackie Robinson traces his life to playing in the black leagues, frustrated by the abuses and restrictions of second-class status in professional baseball.

As Branch Rickey, president of the Brooklyn Dodgers, began to look around for a player to break the color barrier in 1946, he knew he needed a man of character who could withstand the pressures of his "Noble Experiment". Choosing Robinson gave both of them the chance to prove what they believed in.

Struggles that continued in his personal life and in response to the turbulent sixties are interpreted with insight by Robinson and will give listeners an added appreciation for the amazing strength of his character.

I Never Had It Madeに寄せられたリスナーの声

If you could sum up I Never Had It Made in three words, what would they be?

Mr. Rickey is true to his belief in -- "that all men are endowed with certain inalienable rights, and that "among these are life, liberty, and the pursuit of happiness".

What does Ossie Davis bring to the story that you wouldn’t experience if you just read the book?

Some parts are missing

As I was reading along i noticed that there are a few chapters and paragraphs missing. The basic story is still intact and the key point have been hit although it isnt complete.

The Story I Never Heard

The worst thing I imagined for this world class celebrity only paled the anguish he actally experienced. America, shame on you. Wake up before it is too late.

Beautifully written by Jackie and read by Ossie Davis. When SNCC and CORE were radicalized they attacked Jackie unfamiliar with what he did. The courage it took to break the color line was was as astounding. My parents grew up in Brooklyn and were die hard Dodger
Fans and Jackie was a God in our house.loved the book

It is so interesting to gain an understanding of how a famous individual saw themselves and why they did what they did. His life after baseball offers insights into the politics of America in the late 1950’s going forward. Read/listen to this book; it’s worth the time!

A Story For the Ages

I read this book every so often to bring a voice to the story behind the man. To have the pleasure of an audio presentation gives the words an impassioned layer that resonates with me deeply. It is a short listen, but one that you'll definitely want to replay.

This is very short book but what there was of the book was very good. Provides view of JR sa a real person. But narator Had a very gruff voice. If it had been the real JR then I get it but since he died before the book was published, it seems they could have done better

This autobiography is fairly short and so does not go deeply into detail but what what lacks in missing out where you'd like to know a bit more, it's balanced in a quick pace. The narrator was perfectly paired with the work so it was believable and emotional where fitting.

This is a great Primer for people like myself who aren't particularly huge sports fans who are attracted to Robinson's story as a barrier breaker and subsequent activist.

This story was a great one and easy to listen to, yet there were many missing paragraphs. It skips around quite a bit and I had to pause it a lot to read the missing parts.